Imagine you’re baking a cake, but you run out of salt. Even with the missing ingredient, the batter still looks like cake batter, so you stick it in the oven and cross your fingers, expecting to end up with something pretty close to a normal cake. Instead, you come back an hour later to find a fully cooked steak.

It sounds like a practical joke, but this kind of shocking transformation is what really happened to a dish of mouse stem cells when scientists at Gladstone Institutes removed just one gene—stem cells destined to become heart cells suddenly resembled the precursors to brain cells. The scientists’ chance observation is upending what they thought they knew about how stem cells turn into adult cells and maintain their identity as they mature.

“This really challenges fundamental concepts about how cells stay the course once they embark on their path to becoming heart or brain cells,” says Benoit Bruneau, PhD, director of the Gladstone Institute of Cardiovascular Disease and a senior author of the new study published in Nature.

It’s generally well accepted that once a cell has begun differentiating down one of these paths, it can’t turn around to choose a different fate.

“Pretty much every scientist who talks about cell fate uses a picture of the Waddington landscape, which looks a lot like a ski resort with different ski slopes descending into steep, separated valleys,” says Bruneau, who is also the William H. Younger Chair in Cardiovascular Research at Gladstone and a professor of pediatrics at UC San Francisco (UCSF). “If a cell is in a deep valley, there’s no way for it to jump across to a completely different valley.” 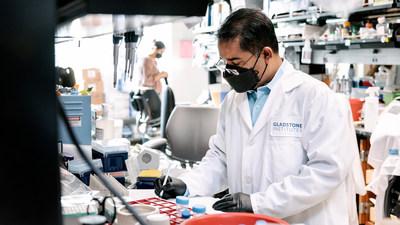 A decade ago, Gladstone Senior Investigator Shinya Yamanaka, MD, PhD, discovered how to reprogram fully differentiated adult cells into induced pluripotent stem cells. While this didn’t give cells the ability to jump between valleys, it did act like a ski lift back to the top of the differentiation landscape.

Since then, other researchers have discovered that with the right chemical cues, some cells can be converted into closely related types through a process called “direct reprogramming”—like a shortcut through the woods between neighboring ski trails. But in none of these cases could cells spontaneously jump between drastically different differentiation paths. In particular, mesoderm cells could not become the precursors of such distant types as brain cells or gut cells.

“After 10 days of differentiation, normal cells are beating rhythmically; they’re clearly heart cells,” says Swetansu Hota, PhD, first author of the study and a staff scientist in the Bruneau Lab. “But without Brahma, there was just a mass of inert cells. No beating at all.”

After further analysis, Bruneau’s team realized the reason the cells weren’t beating was because removing Brahma not only turned off genes required for heart cells, but also activated genes needed in brain cells. The heart precursor cells were now brain precursor cells.

“What we saw is that a cell in one valley of the Waddington landscape, with the right conditions, can jump into a different valley without first taking a lift back to the summit,” says Bruneau.

While the environment of cells in a lab dish and in a whole embryo is quite different, the researchers’ observations hold lessons about cell health and disease. Mutations in the gene Brm have been associated with congenital heart disease and with syndromes that involve brain function. The gene is also involved in several cancers.

“Our study also tells us that differentiation paths are far more intricate and fragile than what we thought,” says Bruneau. “A better knowledge of the paths of differentiation can also help us understand congenital heart—and other—defects, which arise in part through defective differentiation.”