Humans have cooked with fire for millennia, but it may be time for a change. Natural gas appliances warm the planet in two ways: generating carbon dioxide by burning natural gas as a fuel and leaking unburned methane into the air. A new Stanford-led study reveals that the methane leaking from natural gas-burning stoves inside U.S. homes has a climate impact comparable to the carbon dioxide emissions from about 500,000 gasoline-powered cars.

Go to the web site to view the video.

Stanford researchers found that gas stoves emit far more methane than once thought, and most of the emissions occur while the stove is off. During combustion, stoves also emit dangerous levels of nitrogen oxides, a toxic air pollutant.

This extra warming from home methane leaks contributes about a third as much warming as the carbon dioxide generated by combustion of the stove’s natural gas, and sometimes exposes users to respiratory disease-triggering pollutants. The findings, published in Environmental Science & Technology, come as legislators in numerous U.S. municipalities and at least one state – New York – weigh banning natural gas hookups from new construction.

“Surprisingly, there are very few measurements of how much natural gas escapes into the air from inside homes and buildings through leaks and incomplete combustion from appliances,” said study lead author Eric Lebel, who conducted the research as a graduate student in Stanford’s School of Earth, Energy and Environmental Sciences (Stanford Earth). “It’s probably the part of natural gas emissions we understand the least about, and it can have a big impact on both climate and indoor air quality.”

An overlooked contributor to a growing problem

Although carbon dioxide is more abundant in the atmosphere, methane’s global warming potential is about 86 times as great over a 20-year period and at least 25 times as great a century after its release. Methane also threatens air quality by increasing the concentration of tropospheric ozone, exposure to which causes an estimated 1 million premature deaths annually worldwide due to respiratory illnesses. Methane’s relative concentration has grown more than twice as fast as that of carbon dioxide since the beginning of the Industrial Revolution because of human-driven emissions. 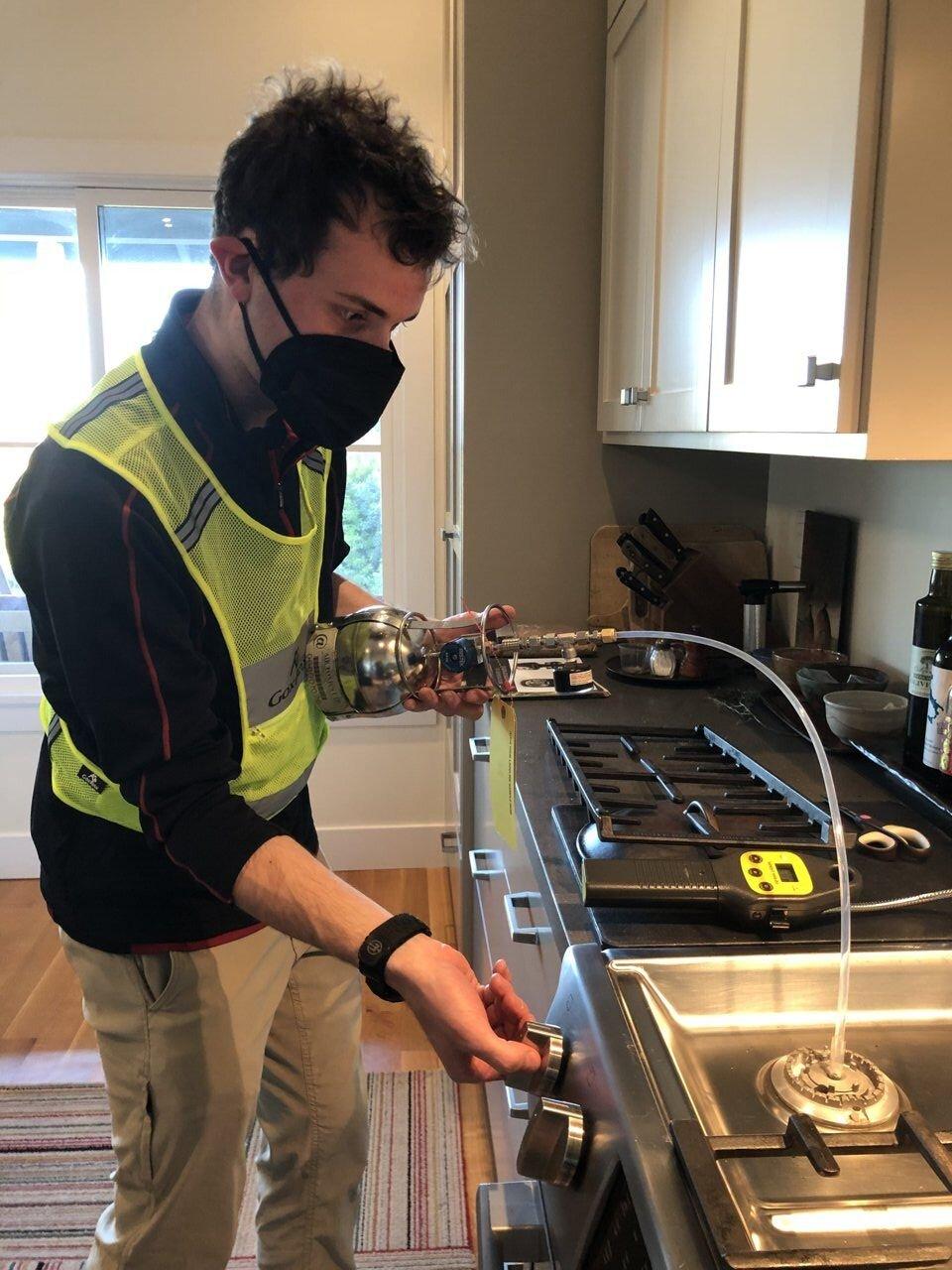 While pipeline leaks of natural gas, which is more than 90 percent methane, have been studied extensively, natural gas-burning cooking appliances have received comparatively little attention.

Over one-third of U.S. households – more than 40 million homes – cook with gas. Unlike other gas appliances, such as space and water heaters that are usually placed away from living quarters, cooking appliances directly expose people to their emissions, which can include formaldehyde, carbon monoxide and nitric oxides that can trigger asthma, coughing, wheezing and difficulty breathing, occasionally resulting in hospitalization. Hood use and ventilation help reduce concentrations of nitrogen oxides and other co-produced pollutants in kitchen air, yet surveys show that home cooks on average use hoods for kitchen ventilation only 25–40 percent of the time.

To better understand cooking appliances’ potential climate and health impacts, the researchers measured methane and nitrogen oxides released in 53 homes in California, not only during combustion, ignition and extinguishment, but also while the appliance was off, something most previous studies had not done. Their study included 18 brands of gas cooktops and stoves ranging in age from 3 to 30 years.

The highest emitters were cooktops that ignited using a pilot light instead of a built-in electronic sparker. Methane emissions from the puffs of gas emitted while igniting and extinguishing a burner were on average equivalent to the amount of unburned methane emitted during about 10 minutes of cooking with the burner. Interestingly, the researchers found no evidence of a relationship between the age or cost of a stove and its emissions. Most surprising of all, more than three-quarters of methane emissions occurred while stoves were off, suggesting that gas fittings and connections to the stove and in-home gas lines are responsible for most emissions, regardless of how much the stove is used.

Larger stoves tended to emit higher rates of nitric oxides, for example. Using their estimate of emissions of nitrogen oxides, the researchers found that people who don’t use their range hoods or who have poor ventilation can surpass the EPA’s guidelines for 1-hour exposure to nitrogen dioxide outdoors (there are no indoor standards) within a few minutes of stove usage, particularly in smaller kitchens.

To read all stories about Stanford science, subscribe to the biweekly Stanford Science Digest.