Home » Technology » How Humanity Gave Itself an Extra Life

The first hint that this ceiling might be breached appeared in Britain during the middle decades of the 18th century, just as the Enlightenment and industrialization were combining to transform European and North American societies. The change was subtle at first and largely imperceptible to contemporary observers. In fact, it was not properly documented until the 1960s, when a historical demographer named T.H. Hollingsworth analyzed records dating back to 1550 and discovered a startling pattern. Right around 1750, after two centuries of stasis, the average life expectancy of a British aristocrat began to increase at a steady rate, year after year, creating a measurable gap between the elites and the rest of the population. By the 1770s, the British elite were living on average into their mid-40s; by the middle of Queen Victoria’s reign, they were approaching a life expectancy at birth of 60.

Those aristocrats constituted a vanishingly small proportion of humanity. But the demographic transformation they experienced offered a glimpse of the future. The endless bobbing of the previous 10,000 years had not only taken on a new shape — a more or less straight line, steadily slanting upward. It also marked the beginning of a measurable gap in health outcomes. Before 1750, it didn’t matter whether you were a baron or a haberdasher or a hunter-gatherer: Your life expectancy at birth was going to be in the 30s. All their wealth and privilege gave European elites no advantage whatsoever at the elemental task of keeping themselves — and their children most of all — alive. 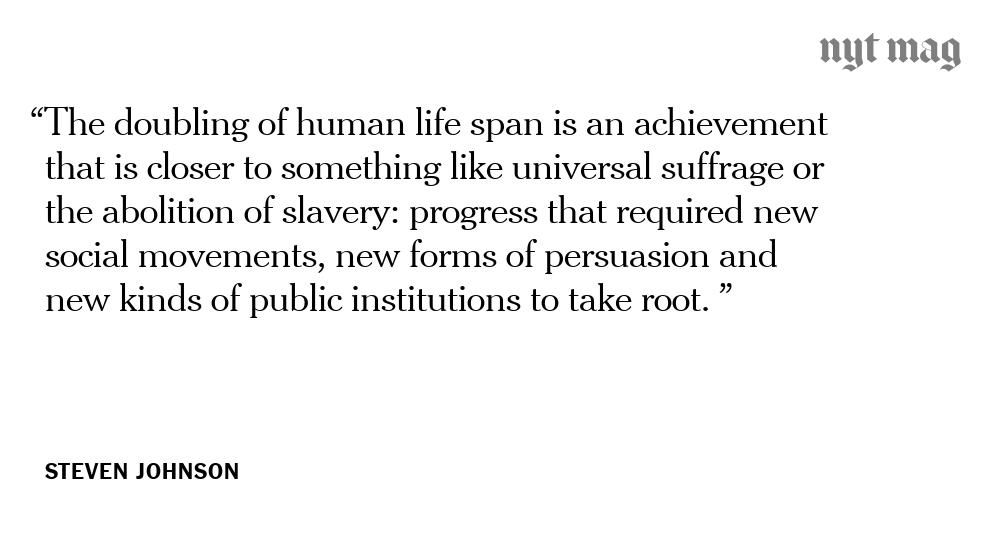 The best way to appreciate the lack of health inequalities before 1750 is to contemplate the list of European royalty killed by the deadly smallpox virus in the preceding decades. During the outbreak of 1711 alone, smallpox killed the Holy Roman emperor Joseph I; three siblings of the future Holy Roman emperor Francis I; and the heir to the French throne, the grand dauphin Louis. Smallpox would go on to take the lives of King Louis I of Spain; Emperor Peter II of Russia; Louise Hippolyte, sovereign princess of Monaco; King Louis XV of France; and Maximilian III Joseph, elector of Bavaria.

How, then, did the British elite manage that first sustained extension in average life span? The classic story of health progress from the age is Edward Jenner’s invention of the smallpox vaccine, which ranks alongside Newton’s apple and Franklin’s kite among the most familiar narratives in the history of science. After noticing that exposure to a related illness called cowpox — often contracted by dairy workers — seemed to prevent more dangerous smallpox infections, Jenner scraped some pus from the cowpox blisters of a milkmaid and then inserted the material, via incisions made with a lancet, into the arms of an 8-year-old boy. After developing a light fever, the boy soon proved to be immune to variola, the virus that causes smallpox. As the first true vaccination, Jenner’s experiment was indeed a watershed moment in the history of medicine and in the ancient interaction between humans and microorganisms. But Jenner’s triumph did not occur until May 1796, well after the initial takeoff in life expectancy among the British elite. The timing suggests that an earlier innovation was most likely driving much of the initial progress, one that originated far from the centers of Western science and medicine: variolation.

No one knows exactly when and where variolation, a kind of proto-vaccination that involves direct exposure to small amounts of the virus itself, was first practiced. Some accounts suggest it may have originated in the Indian subcontinent thousands of years ago. The historian Joseph Needham described a 10th-century variolater, possibly a Taoist hermit, from Sichuan who brought the technique to the royal court after a Chinese minister’s son died of smallpox. Whatever its origins, the historical record is clear that the practice had spread throughout China, India and Persia by the 1600s. Enslaved Africans brought the technique to the American colonies. Like many great ideas, it may have been independently discovered multiple times in unconnected regions of the world. It is possible, in fact, that the adoption of variolation may have temporarily increased life expectancies in those regions as well, but the lack of health records make this impossible to determine. All we can say for certain is that whatever increase might have happened had disappeared by the time countries like China or India began keeping accurate data on life span.