Nvidia grabbed recent headlines with its flagship GPU launches, but AMD stole some of that thunder with the new Radeon RX 480. The red team has made bold claims about its new card, saying that it’s the best 1440p and VR-ready card for around £200.

The RX 480’s new architecture and lower price see it charge headlong into one of computing’s busiest battlefields – and, in particular, up against Nvidia’s older GTX 970. New hardware has caused that card to drop in price, which means it’s now a key challenger for AMD’s card.

Is it worth shelling out for the new Radeon, or can Nvidia’s classic GTX 970 hold its own?

If you want to read our individual reviews, you can click here for the

AMD has made the unusual decision to debut its Polaris architecture with this mid-range card. There’s a lot to like about the fourth iteration of the Graphics Core Next system, not least the move from a 28nm to a 14nm manufacturing process.

That’s a bigger leap than Nvidia has taken with its new 16nm Pascal cards, and it means that AMD can cram even more transistors into the same area without increasing heat and power consumption.

The RX 480 remains a mid-range card, so expectations should be managed. It has a reasonable 2,304 stream processors divided into 36 Compute Units for more granular task delegation, and its core sits at stock and boost speeds of 1,120MHz and 1,266MHz.

AMD’s card has some software features that have also been introduced on Nvidia’s new hardware, like better asynchronous computing. That’ll help when managing CPU and GPU workloads in games with DirectX 12, but it’s not a feature that’ll be coming to the GTX 970.

AMD is building the RX 480 in two versions – one with 4GB of GDDR5 memory, and one with 8GB. The 8GB card will have faster memory, too, with throughput of 8Gbps compared to 7Gbps from the lesser card.

Prices fluctuate pretty rapidly, which is why the GTX 970 is such a close competitor to the RX 480.

The Radeon’s specification compares well to Nvidia’s older card. The GTX 970 uses the older 28nm manufacturing process, which means it has half a billion fewer transistors than its rival, and it only has 1,664 stream processors. Its stock and boost clocks sit at 1,050MHz and 1,250MHz, and it has just one memory configuration: 4GB of GDDR5.

The GTX 970’s lesser specification means it provides a throughput rating of 3.4TFLOPS – far less than the 5.8TFLOPS of the AMD card. There’s little between their power consumption ratings, despite that: the RX 480’s 150W power demand is only five Watts higher than the GTX 970.

It doesn’t sound like much of a contest on paper, but the benchmarks reveal a far closer fight than I expected.

I benchmarked the GTX 970 and RX 480 on TrustedReviews’ test rig, which has been designed to match the specifications of a standard enthusiast gaming PC. It features the following components:

I’ve tested these powerful cards with five games. Each title is run at its highest settings, and I’ve tested each game at 1,920 x 1,080, 2,560 x 1,440 and 3,840 x 2,160 – 4K.I’ve also used a selection of synthetic benchmarks, with 3D Mark’s demanding Fire Strike test alongside benchmarks to measure power consumption and peak temperature.

This is the easiest game in this testing setup, with plenty of fast-paced textures but less intensive workloads in other departments. It’s no surprise that both cards blitzed this rally racer at 1080p: the RX 480 averaged 88.9fps, while the Nvidia card was about nine frames faster.

That means the GTX 970 had an 8.63% lead, but the gap closed to 5.81% at 1440p – perhaps because the RX 480 is flexing its extra transistors and memory. Both cards beat the magical 60fps figure, with the Nvidia silicon almost four frames ahead.

Both cards also managed to beat 30fps at 4K, which isn’t too surprising considering that this is a less intensive game. I was surprised when the AMD hardware took a slim lead: its 34.7fps average is 0.3fps ahead of the Nvidia card.

That’s good, but don’t expect either of these GPUs to handle 4K gaming. Those 34fps averages will be undermined by sluggish minimum framerates, especially when the on-screen action becomes more frantic. 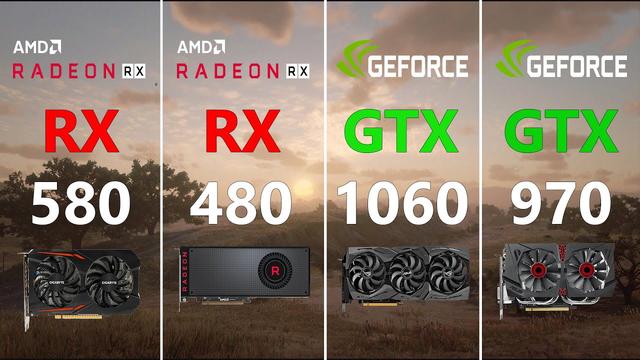 This game is full of particle and fire effects, which can make it a little tricky for some GPUs, especially considering I run this test at Ultra settings.

Nvidia’s card continued its 1080p lead with an average framerate of 85.4fps, but its advantage was a slim 2fps – and it was overturned when I turned the resolution up to 2,560 x 1,440. With the larger number of pixels deployed the RX 480 averaged 57.2fps, which was more than a frame faster than the Nvidia card.

Both of these GPUs managed to run the benchmark at 4K, too. The RX 480 maintained its slim advantage with an average of 39.3fps.

Hitman is a game designed with AMD in mind, so the results here aren’t surprising. It’s a competitive set of results for a title that’s among the toughest benchmarks around thanks to its reliance on high-end lighting and particle effects.

Its Full HD average of 69.7fps was ten frames better than the GTX 970 and on the right side of the crucial 60fps barrier, and it was nine frames quicker than its rival at 1440p. The Radeon’s average of 54.3fps will ensure smooth gameplay at this higher resolution.

The RX 480 maintained a good lead at 4K, too. Its average of 30.6fps is five frames better than the GTX 970 and it does break the important 30fps barrier, but don’t assume that it’ll play Hitman smoothly at 4K without compromising on several of the graphics options.

Rise of the Tomb Raider

Tomb Raider strains graphics cards with trickier weather and lighting effects than most other titles on the market.

This is also the only game where the RX 480 led the way at every resolution and opened up a wider lead over the GTX 970 as I increased the pixel count.

There’s very little to choose between these two cards in the synthetic 3D Mark Fire Strike test. The GTX 970 leads the way with a score of 2,767 points, but the RX 480 is barely behind thanks to its result of 2,638 points.

That supports my conclusions from real-world tests: the GTX 970 might be better in lower resolutions and easier games, but the RX 480 is a more efficient architecture and deploys its power with more aplomb – therefore it takes key victories in tougher tests.

AMD’s shrunken architecture consumed less power than its rival, too. The test rig drew 249W from the mains with the Radeon installed, which is 11W less than the Nvidia-powered machine required.

And, finally, it’s cooler – albeit only by three degrees. The Radeon’s top temperature of 70°C is an excellent result, and it means there’s no need to fret about overheating.Performance Conclusions

There’s a clear trend to be seen across most of my test games: if a game is a tougher benchmark, the RX 480 tends to outperform its older rival. That’s clear evidence of the newer architecture, increased memory throughput and shrunken manufacturing process paying dividends.

It’s a victory for the RX 480 in most of the important tests, then, but don’t go thinking that AMD’s cut-price card will handle 4K gaming smoothly. This is a GPU designed for Full HD and 1440p gaming, and in those department it’s stop on – but any higher resolutions will cause it to struggle.

The RX 480 consistently beats its rival while consuming less power: its peak draw of 249W is eleven fewer than the same machine with the GTX 970 installed.

Other Things to Consider

My testing looked at an EVGA-overclocked GTX 970 and a reference RX 480. In other words, this is one of the best GTX 970s around versus an early RX 480 that’ll surely improve over time with third-party manufacturers pre-overclocking it and adding beefy cooling systems. This means that the narrow lead the GTX 970 shows in any of the above benchmarks will likely be diminished by more powerful RX 480s.

The RX 480 delivers excellent Full HD and 1440p performance for a surprisingly low price – and its consistent leads in tougher tests bode well for the future and indicate that AMD’s new hardware is doing its job.

The GTX 970 is similarly quick at those resolutions and is a tad cheaper, but it doesn’t have the new architecture, the extra memory or the software improvements – as you’d expect for an older card, of course. If they drop in price even further, they’re still an excellent buy.

In this comparison, the RX 480 takes a clear win in the 1440p stakes. But, of course, there are external factors to consider as well. The

has arrived on the scene in both 3GB and 6GB guises. We haven’t tested the GTX 1060 in 3GB form, but we have full benchmarks of the 6GB version, which show it’s a worthy 1440p card.