Home » Technology » Why Scientists Are Turning Molecules Into Music

Mark Temple, a medical molecular biologist, used to spend a lot of his time in his lab at Western Sydney University in Australia researching new drugs for cancer treatments. He would extract DNA from cells, put it into small tubes, and then add a drug to see where it was binding along the chemical sequence. Before he introduced the drug, he’d look at DNA combinations on a screen to see what might work best for the experiment, but the visual readout of the sequences was often overwhelming.

So Temple wondered if there was an easier way to detect favorable patterns.

“I realized I wanted to hear the sequence,” says Temple, who is also a musician. “You know, the combination of some sort of audio display and a visual display is much more powerful than either in isolation.”

He started his own system of assigning notes to the different elements of DNA—human DNA is made of four distinct bases, so it was easy to start off with four notes—and made a little tune out of his test-tube materials. This trick indeed helped him better spot patterns in the sequences, he says, which allowed him to make better choices about which DNA combinations to use.

Temple isn’t the first person to turn scientific data into sound. In the past 40 years, researchers have gone from exploring this trick as a fun way to spot patterns in their studies to using it as a guide to discovery. Some scientists are turning such sounds into songs they say can be therapeutic, while others imagine a future where sounds can be altered and reverse engineered to make new materials.

The first experiments in which scientists turned biological data into sound started in the early 1980s. In the United States, David Deamer, now a biomolecular engineer at the University of California, Santa Cruz, and a pianist, says that he was talking with a researcher friend when he first noticed that three of the four bases of DNA correspond to letters which also correspond to musical notes: A, G and C. He decided to assign the note “E” to the base “T” and started playing the notes on the piano, only to realize that some of these combinations actually represent two chords on the musical scale—C Major 6th or A Minor 7th. Later, he gathered a couple of colleagues and composed melodies from these notes, culminating in a cassette they titled “DNA Suite.” It consisted of about half an hour of music based on the human insulin gene and some bacterial DNA sequences. On August 3, 1982, Deamer appeared on “Walter Cronkite’s Universe” on CBS and played his DNA songs on piano.

In the meantime, in France, the physician and composer Joël Sternheimer was doing something similar. He was developing a framework rooted in physics to transcribe the vibrational frequencies associated with each of the 20 amino acids that make up proteins into musical notes for a score.

Since then, experts from various fields have ‘sonified’ viruses, hormones, proteins, spiderwebs and even flames, using a variety of techniques on the spectrum between what Deamer and Sternheimer used. Some have even turned their efforts into commercial enterprises. Composer Stuart Mitchell founded the startup Your DNA Song that uses a sonification method to turn an individual’s genetic information into a personalized tune.

The scientific community has come to realize that there’s some long-term value in this type of work. Temple, who from that first experiment has created his own algorithmic software to convert data to sound, believes the resulting music can be used to improve research and science communication.

“Sometimes we have thousands of data points from experiments, which is quite hard to look at, but if you can stream through those data points in audio, then you can quickly scan them and listen for outliers and listen for changes in the data,” says Temple. He mentions research in which scholars successfully sonified electrocardiography signals in order to diagnose cardiac diseases: trained cardiologists could spot anomalies with 78 percent accuracy after a short training with the sonification technique.

Temple’s own method consists of assigning each individual DNA “base”—the four building blocks of human DNA, also known as nucleotides, labeled with the letters A, C, T, G—to a musical note. He then takes subsequent pairs of bases, and maps them to a slightly wider collection of notes. Finally, he takes triplets of bases—which in DNA are responsible for converting amino acids—and maps those to notes too. This system produces a series of stacked notes, which can be interpreted as chords. Played in sequence, the chords make music, he says, in a process very similar to the Deamer’s method.

“DNA is read in the cell by proteins that physically move along the DNA sequence in one direction, from start to end,” says Temple. “This is like a play-head reading a cassette tape from start to end.”

During the pandemic, Temple decided to add layers of sound to make the sonification into songs. He sees a stark difference between “sonification” and “musification.” Using sound to represent data is empirical, and scientific, but very different from using creative input to make songs. The musical notes from DNA may be melodic to the human ear, but they don’t sound like a song you’d listen to on the radio.

So, when he tried to sonify coronavirus RNA, he added layers of drums and guitar, and had some musician friends add their own music to turn the virus into a full-blown post-rock song.

SmithsonianMag · Coronavirus Spike Protein MusificationTemple sees this work as an effective communication tool that will help a general audience understand complex systems in science. He has performed his songs in public at concert halls in Australia. 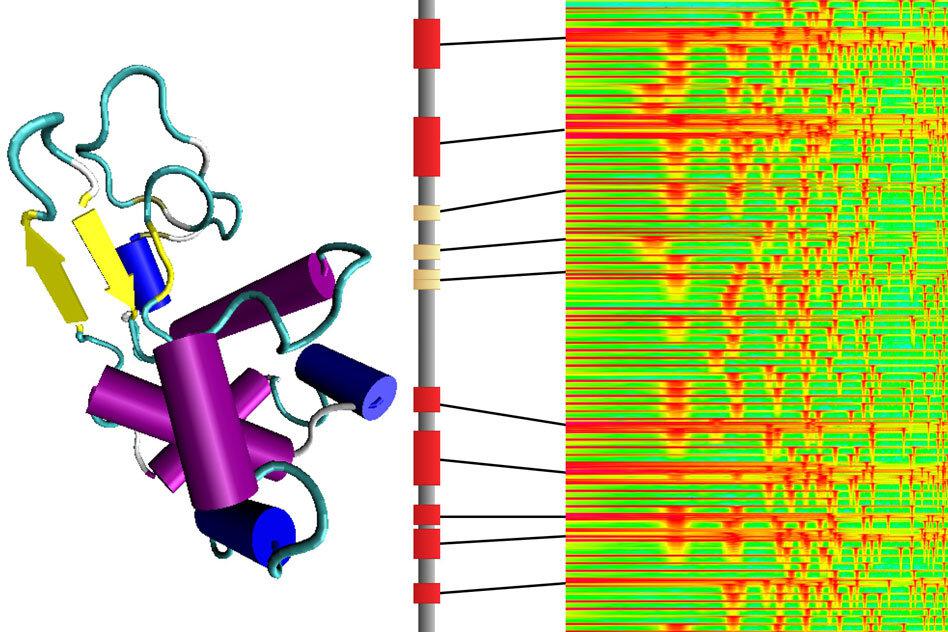 “There's some of the sort of nerdy science applications that people have been doing, but also think about it in terms of outreach as well,” he says. “Trying to get across science ideas in a public setting to draw people in.”

He’s not the only one to think so.

Recent research published in the Journal of Chemical Education by a group of scientists at the University of Illinois at Urbana-Champaign aims to spell out the steps for how sonification can be used in a classroom setting. The scientists provide lecture materials, homework assignments and sound and video examples to explain to teenagers how proteins fold.

Similarly, Linda Long, a biochemist at University of Exeter in the United Kingdom, developed an interactive educational exhibit to teach youths about the human body. The exhibit, which ran for 12 years at Bristol’s cross-boundary science center, used an interactive, musical touch screen to associate instrumental sounds to common proteins found in the body.

“The potential for music to offer a simple and inclusive way for people to connect and emotionally engage with science, nature and the very building blocks of life that make up their bodies is exciting and inspiring,” says Long.

Long assigns sounds to proteins—what’s transcribed from the DNA—according to their shape. She uses a technique called X-ray crystallography in which a protein is literally crystallized and then X-rayed to see its structure in fine detail. This process produces strings of numbers representing the three-dimensional structure of the protein molecule. By passing these numbers through a computer program, she converts them into a sequence of musical notes. So, you can actually “hear” the shapes of the proteins, Long explains. The helices in the protein shapes, for example, can be heard as arpeggios—notes of a chord played in sequence.

SmithsonianMag · Sonification of the Thyroid Hormone

“I am particularly interested in using molecular music to strengthen mind-body connection and to explore any arising therapeutic benefits,” says Long. She thinks the songs can engage a listener’s subconscious mind, promoting a state of mind optimal for self-healing and receiving therapy.

“My intention is for the music to be used to help people visualize a resilient immune system, so as to help reduce any feelings of fear and anxiety they may be experiencing in relation to the Covid pandemic,” Long says. No clinical trials have yet been performed using Long’s music as a therapeutic intervention.

Carla Scaletti, a music technologist and member of the Biophysics Sonification Group at University of Illinois at Urbana-Champaign, notes that it is impossible for now to say if Long’s work has clinically relevant therapeutic properties. “Although I am skeptical,” says Scaletti. “I remain open to reading and evaluating a peer-reviewed article reporting on the results of a clinical trial when they decide to do one.”

Scaletti says that sounds and music can have profound effects on us, and many individuals are adept at self-administering just the right sounds or music they need to calm themselves down, march into battle, or fall asleep. But that doesn’t automatically mean that listening to a translation of a 3-D protein structure as a sequence of tones could impart the antiviral properties of the original protein, for example.

Markus Buehler, a materials engineer at the Massachusetts Institute of Technology and also a musician and composer, believes the crossover between molecules and music goes even further than “music therapy.” He says we could potentially use music to make new treatments.

His lab at MIT has been studying the sonification of molecules by capturing their vibrations. Since atoms are constantly vibrating, he “recorded” their properties. Then, through a computer program, he turns these mini-vibrations into audible sounds for the human ear.

Last year his team sonified a spiderweb into an eerie melody of rustles and turned a flame’s vibration into a meditation-like reverb of gongs. Buehler argues that because everything vibrates we can use anything as an instrument.

“Of course we need technology to actually mine that information, we can't just literally take a tree or fire and make music from that,” Buehler says. “You have to use technologies and mathematical theory to do this, but now you have a way of using a flame as a musical instrument… you can interact with it as a human.”

Buehler has also worked the system the other way around. He’s converted music into entirely new proteins, never before found in nature. For example, he recently converted a variation of Bach’s Goldberg into new proteins. He says he can even go as far as turning a protein into music, and then through music—maybe by adding a riff here and there—improve the protein to be a better variation of itself.

On an evolutionary level, he wonders, who knows where these fit? Maybe his system could create a protein which turns out to be a substitute for meat, or a protein from which it’s possible to synthesize a new drug. Now, for example, Buehler is searching for a protein to extend the shelf-life of perishable food.

Buehler believes that since creativity has led to such complex varieties of music over the years—from classical to techno—maybe this creativity could be translated from an immaterial, pleasant experience, to scientific knowledge to make something physical. As if in those complex melodies, there are hidden formulas to create new materials.

“Actually music has a lot to offer to the science community. We haven't really mined all that data yet,” says Buehler.