The economist Robert Solow once quipped that “You can see the computer age everywhere but in the productivity statistics.” Solow, whose work on technological change and economic output earned him a Nobel prize, was pointing to an empirical puzzle. Why don’t computing technologies translate into economy-wide increases in productivity?

Solow, as many economists should, might have waited a few more years before speaking. From the late 1990s to the mid-2000s, the percolation of information and communications technology (ICT) led to increases in US total factor productivity (TFP). This metric represents the estimated impact of input quality on output production. TFP is measured as the residual output that is unaccounted for after controlling for input (e.g., capital, labor) quantities. In other words, if doubling capital and labor inputs more than doubles output, then the difference between doubled output and actual output is TFP. This example simplifies how inputs combine with each other in production but illustrates the general measure. TFP growth is also often associated with increases in returns to investment in the development of technologies that facilitate it.

The period from the mid-90s to the mid-2000s saw this pattern: increasing returns to investments in technological development, even in spite of the dotcom boom, and an increase in US TFP growth. Unfortunately, since 2004, Solow’s paradox has risen from the grave. US TFP growth has stagnated below its long-term trend. This phenomenon has happened despite the American economy experiencing increasing internet speeds, the advent of smartphone technologies, and the widespread adoption of increasingly cheap or open-source software across industries over these same years (with corresponding increases in returns to investments in all of these sectors). What, then, is behind Solow’s paradox, redux? And what does this mean for investment in technological capital moving forward?

Solow’s Paradox: A Crisis for Productivity?

The Nobel Prize-winning economist Robert Solow once remarked that “You can see the computer age everywhere but in the productivity statistics.” Since 2004, this quip has proven frustratingly accurate. Despite remarkable advances in technology, US productivity has been stagnant. What underlies this paradox?

More From Edward HearnIs Your Company Sourcing the Wrong Type of Talent?

One possible explanation deals with the nature of technologies and their economic uses.

General-purpose technologies are adaptable and impact most industries across an economy. They enable widescale re-imagining of business processes and are highly adaptable for multiple uses. Examples of these technologies include steam power, vaccines and writing. Through general uptake, they impact TFP growth to result in economic output gains and increases in investment returns. 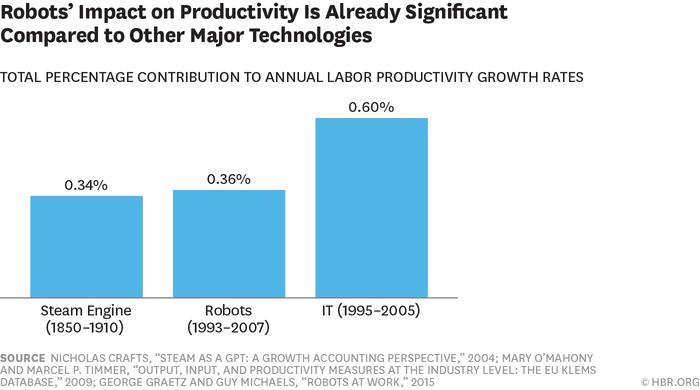 Managerial technologies, on the other hand, tend to be company- or industry-specific and are not easily adopted across productive processes. The corresponding TFP growth economy-wide is neutralized as breakthrough firms or industries experience gains in productivity while non-breakthrough firms cannot compete and must exit the market. These two groups offset one another, leading to stagnation at the economy-wide level.

Examples of managerial technology breakthroughs (firms) include assembly-line automobile production (Ford, GM), just-in-time ordering (Dell), or personalized product recommendations (Amazon, Netflix). Because managerial-tech breakthroughs benefit some companies or industries at the expense of others, TFP growth for these specific entities skyrockets and drives other competitors out of business with corresponding positive or negative returns on investment in the right or wrong places.

The key question concerning the post-2004 US slowdown in TFP growth is what type of technology is software? If it is a managerial technology, as the above-linked article asserts, we should expect that productivity gains from the adoption of software-based business solutions will take a long time to be effectively adopted. Subsequently, they will also take a long time to show up as quantifiable productivity gains, if they do at all. Without the clear signal of a managerial technology’s potential impact on TFP, investors will incur a larger risk of loss when attempting to target technology investments that will maximize returns.

Interestingly, though, even if widespread software adoption more closely resembles a general-purpose technology, this might also be the case. People tend to forget how long general-purpose technologies take to develop for productive uses. For instance, James Watt’s original patent on the steam engine was granted in 1769, but it took roughly a century for steam technology to make its way into widespread use during the first Industrial Revolution. Similarly, capitalizing on the pioneering work in electric battery technology of the early 19th century, Michael Faraday invented his first electric motor in 1821. Electric power and machinery did not find their way into widespread industrial use until the 1920s, however, because factories and industrial processes had to be redesigned to incorporate this new machinery. Even the ICT productivity wave of the late 1990s and early 2000s came on the back of work in signals processing throughout the late 1940s and ’50s at Bell Labs. This research led to Martin Cooper’s invention of the first cell phone 20 years later, but it would take another 30 years for cellular technologies to become ubiquitous and productivity-enhancing.

If software is a general-purpose technology, perhaps industrial processes need time to reform themselves around it. In fact, Erik Brynjolfsson and Lorin Hitt have reached this very conclusion. Their work suggests that TFP, as it is currently quantified, does not account for changes in productive processes brought about indirectly by computers while those changes are occurring.

For instance, a first warehouse that uses currently existing software simply to process orders will be more productive now versus another warehouse that is developing an integrated software that processes orders, maximally allocates shelf space, and handles scheduling incoming and outgoing transportation. The second warehouse will be more productive if and when this new software technology is fully functional, but at present its implementation requires the second warehouse to forego its ability to fully operate.

As Brynjolfsson and Hitt say, however, TFP is incapable of capturing these coming productivity changes in real time. Thus, conflating the two softwares as the same capital is misleading. TFP makes the first software look productive and the second software look non-productive, so that the effects of the two softwares and their impacts on output cancel each other out. The development of the software and its ability to recombine other aspects of the second warehouse to increase output Brynjolfsson and Hitt term “intangible capital,” meaning changes in industrial processes that alter production to incorporate new technologies that will eventually be impactful.

Brynjolfsson and Hitt make the point that general-purpose technologies typically do not directly increase TFP, but rather serve to indirectly increase productivity by reformatting productive processes around adaptable uses of these technologies. This dictum implies that, for each dollar invested in a new, general-purpose technology, as they suggest computing and software are, multiple dollars of future productivity gains are not captured in measures of capital units. This is due to the time required for businesses and industries to rearrange or recombine nascent technologies with existing inputs to maximize outputs. The accumulation of this intangible capital is difficult or impossible to quantify. Simply measuring units of capital input results in estimating TFP measures that are attenuated while new and existing technologies are being reconfigured, as in the case of the two warehouses. Moreover, if the second warehouse’s software implementation does increase that warehouse’s productivity, it will also take time for other warehouses to implement the new software and change their operating procedures accordingly.

More in Corporate InnovationIs Your Industry Primed for Disruption? Study Weak Signals to See It First.

In making his case for software as a managerial technology, Austin Vernon states in the previously linked blog post, “Without a large industry and the promise of scale, it is hard to justify investment in digitizing an entire process.” Vernon goes on to state that “Software rearranges inputs to be more efficient ... to guarantee significant advances, we need better inputs and more of them.” He also concludes that development of future general-purpose technologies will more than likely occur in industries that produce inputs to technological development. Examples are companies that develop materials for use in chip technologies or industries involved in producing lithium-ion batteries which are coming into general use in the energy and transportation sectors of the economy or firms that focus on developing mRNA-based formulae into compounds for use in future vaccines or other disease treatments.

For these reasons, it makes more sense for external investors to focus on funding general-purpose, input-based technologies rather than firms or industries working on managerial-technology breakthroughs. The latter take much longer and might not materialize in time to catch up with rival firms’ discovering these efficiencies first. Best to leave these investments to institutional or internal investment rather than incur the risk of the investor picking Barnes and Noble and not Amazon. A better bet would be to focus on financing the battery or silicon-chip technologies that made both the Nook and the Kindle possible in the first place.