The Allegheny National Forest is absent from Google Maps (right) but displayed on Apple Maps (left).

If you looked at Google Maps this week, you might have noticed something strange: less green.

Typically, mint green highlights designate publicly owned wild spaces on Google's maps. But as of this writing, some of those public lands have gone gray. The locations are still searchable, but if you don't already know the park or forest exists, and where exactly, you might not be able to find it.

No green space is safe: Many of the missing parks are national forests, but some are state forests, Bureau of Land Management recreation areas, wildlife refuges and wilderness areas. Some, like the Blue Hills Reservation in Massachusetts, are just a few thousand acres. Others, like the Allegheny National Forest in Pennsylvania, are over 500,000.

The first clue to Google's de-greening came Tuesday night, when your blogger was casually browsing maps of national forests (as one does). Sometime in the past few weeks, the 1.6 million acre

in Oregon's Cascade region had gone from green to gray.

"I was surprised to see we'd lost our government status!" said Karen Kanes, spokeswoman for the no-longer-mapped national forest. Google — which acknowledges its maps do have "occasional inaccuracies" --

was displaying the forest in off-white like private lands, with its location marked at the headquarters in a nearby town.

Apple (left) and Google screenshots of the Willamette National Forest. The pins in each image indicate where each app says the forest is located, when searched.

Apple (left) and Google screenshots of the Willamette National Forest. The pins in each image indicate where each app says the forest is located, when searched.

And why was the Willamette National Forest unworthy, while bordering Umpqua, Deschutes and Mount Hood national forests got to stay?

"We haven't noticed something like this before," says Donavan Albert, who runs the U.S. Forest Service's own locator map that draws from Google. "I've seen minor discrepancies between their data and ours, but never an entire forest."

in fact offers one easy way of seeing data missing from Google Maps as it layers outlines of national forests' borders over what would normally be Google's mint-green spaces.

Yet currently, several areas are bordered but not filled. Large chunks are gone from the Uinta-Wasatch-Cache National Forest in Utah. North of Yellowstone, the Beaverhead-Deerlodge, Gallatin National Forests, and Custer National Forest are grayed out entirely.

The U.S. Forest Service's own locator map is based on Google Maps, offering one way to see data missing from Google Maps as it layers outlines of national forests' borders over what would normally be Google's mint-green spaces.

Courtesy of the U.S. Forest Service

Courtesy of the U.S. Forest Service

And this is only the federally owned forests. The U.S. Forest Service map does not display grasslands, state parks, wilderness areas or wildlife refuges.

The majority of New York's public lands, for instance, are state-owned. 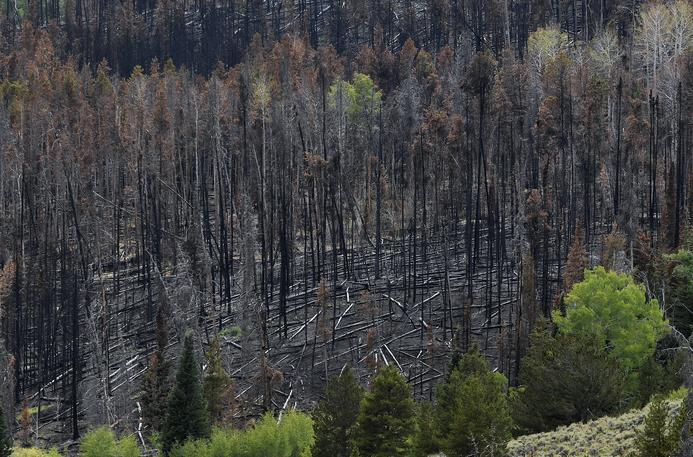 VIRTUAL REALITY: Stand At The Edge Of Geologic Time

"Well, that's odd," said Neil Woodworth, executive director of the Adirondack Mountain Club, who was near the Catskill Park in New York when I reached him.

He pulled out his topographical maps to compare with Google's. Most of the Catskills were spared, while large chunks of

to their north appeared grayed out. "The entire High Peaks Wilderness is just gone," Woodworth said.

And if you're thinking you could just switch to Apple Maps — not so fast. Those aren't entirely accurate either.

In Florida, Apple is missing a substantial chunk of Everglades National Park, and Google doesn't show a nearby wildlife refuge or Kissimmee Prairie Preserve State Park.

In Massachusetts, Bradley Palmer State Park is missing from Google Maps, while Willowdale State Forest across the road is missing from Apple Maps. But! Both apps display the nearby Turner Hill golf course.

But she also offered a statement detailing the complexity of data that goes into drawing Google Maps:

Google, in the statement, also encouraged users to flag discrepancies with a "

" tool at the bottom-right corner of maps.

Apple did not provide a statement.

This isn't the first time errors have been found on Google or Apple maps. In March, a construction company

tore down the wrong house

after numerous problems with Apple Maps, one of which led Australian police to call the maps

. People searching for the town of Mildura were sent 43 miles away to a remote part of the desert.

The public-lands errors are unlikely to be life-threatening, but they can get confusing.

It's less common for people to rely on digital maps for hiking — with sparse cell service and reliability of detailed ink-and-paper trail maps. Plus, "Google Maps doesn't do too great with trailheads and parking areas," Woodworth says.

But digital maps are still a key tool for trip planning.

"When I'm somewhere new I usually turn to the Internet to find parks and green spaces to explore," wrote Reddit user Bengal859, who used Apple Maps this month to find a park near Lake Erie in Ohio.

But the Forest Service representatives assure: Just because their lands aren't on Google, it doesn't mean they're not there.