Data modeling comprises the methodologies of creating data representations for data visualization, which allows users to better understand the global values and associations that create the data’s potential underlying value.

Data modeling is used to define and analyze the data requirements to support data mining and data analytics. The data modeling process involves professional data modelers working closely with business stakeholders as well as potential users of a system.

In this article, we discuss the data model, types of data models, data modeling techniques, and examples.

A data model is a visual representation of data elements and the relations between them. It is the fundamental method used to leverage abstraction in an information system. Data models define the logical structure of data, how they are connected and how the data are processed and stored in information systems.

Data models provide the conceptual tools for describing the model of an information system at the data abstraction level. It enables users to decide how data will be stored, leveraged, updated, accessed, and shared across an organization.

Data models may also provide a portrait of the final system, and how it will look after implementation. It helps in the development of effective information systems by supporting the definition and structure of data on behalf of relevant business processes. It facilitates the communication of business and technical needs for the development of an action plan.

Earlier data models could be “flat data models,” in which data was displayed in the same plane and was therefore limited; flat models could introduce duplications and anomalies. Now, data models are more likely 3-D, and are extremely effective and useful to the development of business and IT strategy.

The ANSI/X3/SPARC Standards Planning and Requirements Committee described a three-schema concept, which was first introduced in 1975. Those three kinds of data-model instances are conceptual schema, logical schema, and physical schema.

Also see: What is Data Mining? 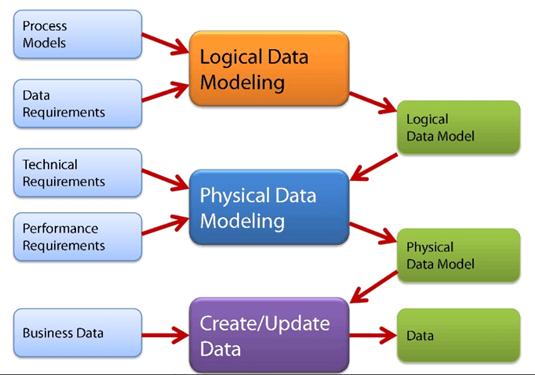 The conceptual schema describes the semantics of an organization and represents a series of assertions. It may exist on various levels of abstraction and hides the internal details of physical storage structures and instead focuses on describing entities, data types, relationships, and constraints. The conceptual schema design process takes information requirements for an application as input and produces a schema that is expressed in a form of conceptual modeling notation. Below is an example of a conceptual schema:

Software developers, as well as administrators, tend to work at this level. Although the data can be described as data records that are stored in the form of data structures, the data structure implementation and other internal details are hidden at this level. Below is an example of a logical schema:

A physical data model or physical schema is a representation of an implementation design; it defines data abstraction within physical parameters.

Also see: What is Data Analytics?

There are various techniques to achieve data modeling successfully, though the basic concepts remain the same across techniques. Some popular data modeling techniques include Hierarchical, Relational, Network, Entity-relationship, and Object-oriented.

The Hierarchical data modeling technique follows a tree-like structure where its nodes are sorted in a particular order. A hierarchy is an arrangement of items represented as “above,” “below,” or “at the same level as” each other. Hierarchical data modeling technique was implemented in the IBM Information Management System (IMS) and was introduced in 1966.

It was a popular concept in a wide variety of fields, including computer science, mathematics, design, architecture, systematic biology, philosophy, and social sciences. But it is rarely used now due to the difficulties of retrieving and accessing data.

The relational data modeling technique is used to describe different relationships between entities, which reduces the complexity and provides a clear overview. The relational model was first proposed as an alternative to the hierarchical model by IBM researcher Edgar F. Codd in 1969. It has four different sets of relations between the entities: one to one, one to many, many to one, and many to many.

The network data modeling technique makes it easier to convey complex relationships as records and can be linked to multiple parent records.

The object-oriented data modeling technique is a construction of objects based on real-life scenarios, which are represented as objects. The object-oriented methodologies were introduced in the early 1990s’ and were inspired by a large group of leading data scientists.

It is a collection of objects that contain stored values, in which the values are nothing but objects. The objects have similar functionalities and are linked to other objects.

Data modeling is an essential technology for understanding relationships between data sets. The integrated view of conceptual, logical, and physical data models helps users to understand the information and ensure the right information is used across an entire enterprise.

Although data modeling can take time to perform effectively, it can save significant time and money by identifying errors before they occur. Sometimes a small change in structure may require modification of an entire application.

Some information systems, such as a navigational system, use complex application development and management that requires advanced data modeling skills. There are many open source Computer-Aided Software Engineering (CASE) as well as commercial solutions that are widely used for this data modeling purpose.