Home » Technology » Watch: Vision Pavilion at Expo 2020 Dubai is a tribute to the vision of Sheikh Mohammed

Dubai: A visit to the Vision Pavilion at Expo 2020 Dubai will leave you emotional, surprised, inspired and in awe.

This is the pavilion that celebrates the vision of His Highness Sheikh Mohammed bin Rashid Al Maktoum, Vice President and Prime Minister of the UAE and Ruler of Dubai.

As soon as you enter the pavilion, a moving quote by Sheikh Mohammed catches your eye. “We thank God for the experiences we have gone through, the challenges we have learnt from and the circumstances that have made us.”

Visitors will only fully understand the quote after a journey through the pavilion as they explore the life of Sheikh Mohammed from his childhood to present day.

The pavilion is based on Sheikh Mohammed’s book ‘My Story’ that narrates his life through many experiences, such as his childhood memories, his love of horses, as well as Dubai’s story of its rapid growth from a small trading port to an international city at the heart of global business.

The first chamber in the pavilion plays a video production of young Sheikh Mohammed, when his father, the late Sheikh Rashid bin Saeed, took him to Humaid bin Amhi in the desert.

Amhi was a man of the desert who schooled young Sheikh Mohammed on survival skills, away from the comforts of the city. Visitors learn, for example, that after spending the whole day training with hunting with falcons and hounds, they used to gather around the fire for dinner and talks.

The video narrates how young Sheikh Mohammed used to wake up after being stung by desert scorpions during the night. And how Amhi used to treat the bites with ashes from the fire.

In the third chapter, titled ‘sleeping with the scorpions’, from Sheikh Mohammed book, the Dubai Ruler recalls how Amhi used to collect small scorpions and put them in his bed on purpose. 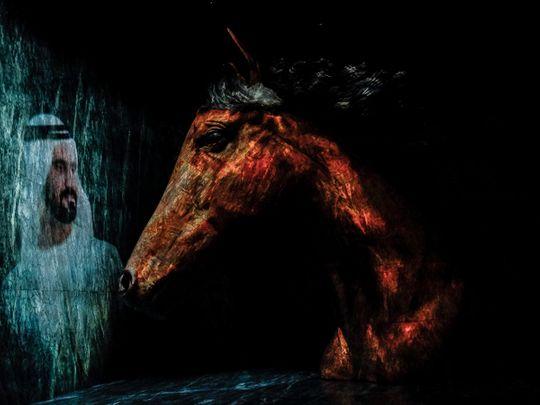 “He wanted to make me immune to the deadly desert scorpions’ poison. Till date, I am immune to the poison of scorpions. Not everything that hurts is evil, sometimes it holds goodness and protection,” Sheikh Mohammed says in his book.

The journey continues to the second chamber, called ‘Little Cave’.

This was the favourite place of the young Sheikh in Zabeel Palace. His father Sheikh Rashid had asked his son to look after a falcon in a sandy room, and Sheikh Mohammed turned it into a small zoo of sorts, calling it ‘Little Cave’.

There he placed jars storing snakes, fish skeletons, falcon feathers and scorpions. His parents were delighted with his love for the natural world.

His mother used to give him notebooks to draw in and to keep track of his observations and scientific investigations carried out on his trips to the desert and beaches of Dubai.

The third chamber aims to celebrate the deepest passions of Sheikh Mohammed — horses and poetry.

Visitors there will be greeted by 52-tonne marble statue in the middle of the chamber representing Sheikh Mohammed’s favourite horse, ‘Dubai Millennium’.

The horse statue standing 5.5m tall displays a show about how he won nine out of ten races before he sadly passed away in 2001.

The chamber also displays how Sheikh Mohammed has a passion for the written word and poetry. He had started writing poetry as a young man, using pseudonyms such as ‘Saleet’ and ‘Nedawi’, to avoid association with his family name.

The next chamber, ‘Living among the pearl divers’, narrates a story of how Sheikh Mohammed learnt valuable lessons from the lives and hardships of the UAEs’ pearl divers.

In the final chamber, visitors can enjoy a ‘Pins Table’, designed to show how Dubai became a city of hope. The table show Dubai’s evolution from a small trading port to a world-class modern city. It features voices of various people and officials who witnessed the rise of the city from its early days to historic milestones such the building of the world’s tallest tower, Burj Khalifa; space exploration and reaching Mars.

At the end of journey through the pavilion, another great quote by Sheikh Mohammed grabs your attention while walking out.

“This is only the beginning of the story.”