The University of Vermont Health Network, an affiliation of six hospitals in Vermont and New York, was formed in 2011. At the time, founder Dr. John Brumsted was named interim CEO and following a national search he was hired as permanent CEO in February 2012. This week the 69-year-old administrator announced he will retire at the end of September. Originally an Obstetrics and Gynecology specialist, Dr. Brumsted tells WAMC North Country Bureau Chief Pat Bradley the idea for the network germinated during his early experiences in the National Health Service Corps.

In 1979 to ‘81 I was in a physician shortage area in a very, very rural part of southwestern New York state and it was hard. It was hard to be a doctor in that rural environment and be totally alone. But it was much harder on the patients. And, you know, as an advocate for my patients trying to get them to get the services that they needed, frequently 100 miles away in Buffalo or Erie, PA, it was incredibly difficult. And it just from that day forward impressed me that particularly in rural environments not having a system of care really was a big impediment to people accessing high quality care. And so that's been a driver for me and I was fortunate enough to have the board of, at that point, Fletcher Allen Health Care really believe in me and believe in that vision. We certainly serve a rural area. 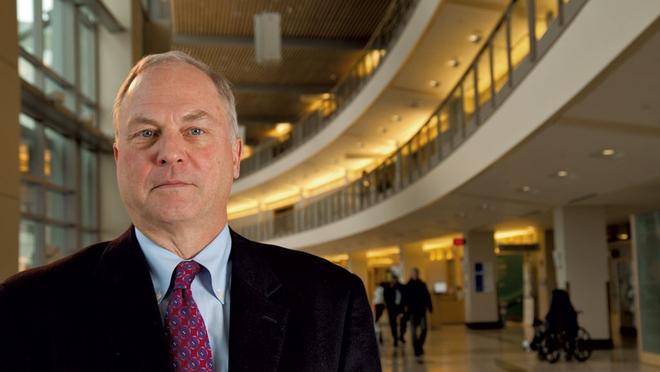 First of all you might ask why. And the health network is built around the normal referral pattern of the academic medical center in Burlington. In a lot of the specialties provided by the UVM Medical Center a good quarter of the patients come from Northern New York. So it was really important right from the outset that if we were going to do this and do it well it was going to have to be in two states. And both of the states are highly regulated relative to health care. It is different though. Particularly in COVID our New York entities will have things that we have to do to follow the rules in New York state and things that we do differently in Vermont. You know the vaccine mandate recently was a great example. The governor of the state of New York said all health care workers vaccinated end of story. On the Vermont entities we actually waited until the Center for Medicare Medicaid Services put out the edict that if you're a health care organization, you take federal dollars, everybody needs to be vaccinated. And so you got to pay attention to where the entities are and make sure that you can follow the rules. I will say we've managed to do some things with the regulators in New York that were firsts.

It's important when you have a system like ours because it does bring consistency and higher quality and lower cost. At the same time we're in a people business. You know it's all about our people and it's all about the people that we're delivering services to and doing so in a high quality, compassionate way. I mean, you got to invest in technology, but it's about the people.

Dr. Brumsted, the network was formed about 10 years ago. Before that I understand you were practicing in gynecology. Do you ever look back and go, wow never thought I'd be doing this now?

You know, I've always been interested as an academic physician in taking great care of people that needed my services one on one or helping a family. But I also realize that there's ways to have impact on greater numbers of people. And you do that by teaching and training. You do that by doing clinical research and you can do that by administering in health care too and you know have a impact on a broader group of people. So I've always being in academics looked for ways to broaden the impact of what I've been able to do. And pretty early on, you know I think it was 1996 and 97 when I was way too young and didn't know nothing, they made me interim CEO of Fletcher Allen Health Care. And you know I kind of got the bug then and the light bulbs went off that you could have a real impact. And so I've stayed up until this current position as a very active clinician. Love to be in the operating room. I missed that to this day but it's been replaced by another way to live the dream of helping people.

The UVM Health Network says a national search has begun to find a successor to Dr. John Brumsted before he retires on September 30th.