ARLINGTON, Va. — The U.S. Navy is unlikely to pursue a formal program for unmanned surface vessels in the next five years, instead focusing on the enabling technologies first, several leaders said this month.

The Navy in fiscal 2020 laid out an aggressive plan to buy a handful of prototype medium and large USVs and then quickly transition into a program of record using shipbuilding funds. The service acknowledged it would adjust the program-of-record USV design over time to incorporate lessons learned as prototypes hit the water.

Leaders argued this strategy was necessary because the technology was key to the Navy’s Distributed Maritime Operations concept, and because there was no time to waste in building and fielding the vessels.

After two years of Congress pushing back against this quick move into unmanned programs, the Navy has quietly acknowledged a change in strategy.

“We are focused on prototyping and maturing the fundamentals, the building blocks,” Rear Adm. Casey Moton, the program executive officer for unmanned and small combatants, said earlier this month at the Surface Navy Association’s annual conference.

Though Moton said there’s a lot of interest in the future large and medium USV programs — previously slated to begin as early as 2023 — his team is more “focused on the system engineering pillars that we need to field any such platform.” He highlighted several of those pillars during a ship construction panel at the SNA conference.

On autonomy, the two Overlord large USVs — originally procured by the Pentagon’s Strategic Capabilities Office and more recently handed over to the Navy — each conducted long-range transits from the Gulf Coast, though the Panama Canal and up to Southern California.

Moton said the community learned a lot about autonomous transit and ship system operations during those 4,400-mile and 4,700-mile transits. The Navy is also working to define how it would acquire and manage a vessel’s autonomous capabilities, as a separate capability from the hull itself or from the payloads and combat systems the hull would employ.

And whereas the Overlord USVs were focused on demonstrating autonomy and payloads, the two Navy-bought Sea Hunter medium USV prototypes were busy on the fleet-integration and concept-development side, Moton said.

Rear Adm. Paul Schlise, the director of surface warfare on the chief of naval operations’ staff (OPNAV N96), told Defense News following his presentation at a separate SNA panel that he wouldn’t move into a program of record until all those separate pillars were more mature. One key pillar is the development and maturation of hull, mechanical and electrical systems that can support unmanned vessel operations. 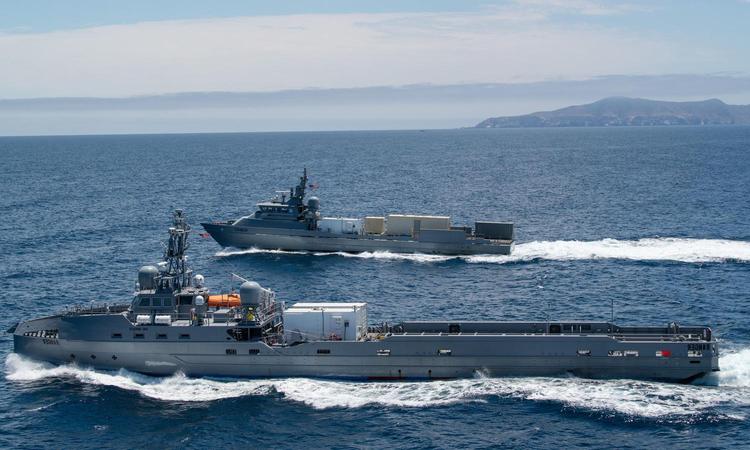 Schlise said lawmakers were “crystal clear” in the fiscal 2021 defense authorization bill that they didn’t want to invest in programs of record until it’s clear hull, mechanical and electrical systems would work for weeks or months at a time without sailors around to perform routine maintenance or emergency repairs.

“There’s a lot of folks interested in coming to prove their chops,” he said of industry representatives, “and we’re going to do that at a land-based engineering site in Philadelphia” where companies can set up prototypes of hull, mechanical and electrical systems as well as demonstrate their long-term performance.

Schlise said the electrical plant for the Flight III Arleigh Burke destroyers is already running at that test site.

“That’s been a place we’ve done a lot of learning so we don’t have to learn those lessons on the ship. We’ve frankly burned up a couple components in the electrical distribution system there; that’s all things we don’t have to learn on the ship now,” he explained. “So that’s my focus: When we get around to proving all those … reliability and autonomy things, then we’ll get on to buying some platforms with [Navy shipbuilding dollars]. But that’s our due-out to Congress first, so that’s my focus now at N96.”

Asked how long that would take and when the Navy will begin a program of record, Schlise said he hopes by the end of the five-year Future Years Defense Program that the service will “have gotten pretty confident in what we can and can’t do. And maybe we’ll learn this is going to take a little bit longer. I don’t have an absolute clairvoyant picture.”

“Have any of you ever seen a propulsion plant that can operate for 45 days without a person touching it on a ship? There are some land-based systems and power plants and things that have been running [unmanned] for years, but a ship is a completely different environment. So we’re going to learn a lot through that process. And when we’re ready, then we’ll move forward with procuring,” he added.

Not moving into a program of record, or even seriously eyeing a whole-vessel prototype, changes the calculus for industry. The Navy previously awarded L3Harris Technologies a contract for one medium USV prototype, with options for up to eight more, with the idea that “[l]everaging new rapid prototyping authorities and mature commercial technology will allow us to quickly deliver a capable prototype to the Surface Development Squadron to conduct experimentation and learning in support of the Navy’s plans for a future fleet incorporating unmanned vessels.”

Now, however, the Navy wants to see investments in specific unmanned-related capabilities rather than an integrated all-up unmanned vessel.

“We heard loud and clear the need for [Unmanned Maritime Autonomy Architecture] and that open architecture, and we spent a lot of our own internal [research and development] in the redesign of our [unmanned underwater] vehicles so that they have a much more modern architecture. We took that source code, and we essentially rewrote it to still be just as reliable but now to be much more accommodating to UMAA,” he said of HII’s third-generation configuration of its Remus unmanned underwater vehicle.

As an example, he said a third party could now take a Remus vehicle and swap out the inertial navigation system or a payload, and then unilaterally perform integration without involving HII or the Navy, thanks to the maturation of UMAA standards. Although that’s just one component of the maturation efforts that must take place before launching a program of record, Reynolds said it’s a good example of how industry investment in the right priorities can help the Navy.

Asked if he thought the unmanned field had lost momentum since the Navy’s big push in FY20, Reynolds told Defense News: “I do not feel that there actually is a loss of momentum. I think there probably is some rethinking of requirements, and that’s what you see the Navy standing up the unmanned task force in the Pentagon to do.”

He also noted the Navy’s interest in applying autonomy software as an aid to manned ships, rather than controlling unmanned ships.

“We don’t have to jump to unmanned right away. A bridge to getting to unmanned could be ... the integration of autonomy onto manned platforms. Just have it run in the background, have it start to generate data and be assessed and basically — not trying to replace anyone — but basically aid an overwhelmed bridge,” he explained, noting the Navy recently released a request for information to industry on this topic.

“We saw a few years ago in the McCain, Fitzgerald [destroyer collisions] that maybe had there been some kind of artificial intelligence aiding some decision-making, that could have been some help to a bridge crew that appear to be overwhelmed or tired. I think that’s closer to something we could get into the hands of the fleet before … we jump right to a large USV.”

Megan Eckstein is the naval warfare reporter at Defense News. She has covered military news since 2009, with a focus on U.S. Navy and Marine Corps operations, acquisition programs, and budgets. She has reported from four geographic fleets and is happiest when she’s filing stories from a ship. Megan is a University of Maryland alumna.

They will take their new roles March 1, and Petters will stay at Huntington Ingalls through 2022.

USS Little Rock lost power and returned to port during its post-maintenance sea trials, two years after a similar incident involving its combining gear forced it to end its maiden deployment.

The Navy and Marines aren't slowing their spending yet, despite worries of a full-year continuing resolution. If that CR does happen, some spending would come to a screeching halt.

Though the Navy had to take parts from carrier John F. Kennedy to make first-in-class Gerald R. Ford whole last fall, the Navy says it has enough spares now and won't need to cannibalize in-construction ships to support Ford's deployment this year.