SAN JOSE (CBS SF) — A jury of eight men and four women split on two of the major counts against former Silicon Valley tech wonder Elizabeth Holmes Monday, ruling she defrauded investors of millions of dollars but did not mislead patients and doctors as to the accuracy of her failed startup Theranos’ blood testing technology.

“Yes, it was a mixed verdict, but I think it was a fair one given the testimony I heard,” said KPIX 5 legal expert Michele Hagan who sat in the courtroom for much of the trial. “We don’t know how undecided they were meaning were there more votes for guilty. Usually when it’s not guilty, there wasn’t enough evidence to show that she was guilty.”

“The jury acquitted her of all the charges having to do with defrauding patients,” said Stanford University Prof. of Law David Sklansky. “This seems to be a case where the jury took time, was quite careful and reached a conclusion that they didn’t believe that one of the schemes alleged by the prosecutors had been proven. I think it suggests that they were being very careful and methodical.”

Judge Edward Davila will determine her sentence at a later hearing. Holmes will likely be allowed to stay free on bail until her sentencing, which could take place six months or longer.

“It’s all up to the judge’s discretion, it could be lengthy,” said Hagan of the eventual sentencing. “Wire fraud is no joke (when it comes to sentencing).”

She said the verdict is likely sending a chill through Silicon Valley.

“It’s a wakeup call for Silicon Valley,” Hagan said the message the verdict sends to the startup world. “You better be very careful of what you say (to investors) or what you put in writing or you put on your website so you don’t have any misrepresentations.”

While there was no released statement from Holmes or her defense team, spokesperson for the U.S. Attorney’s Office Abraham Simmons spoke briefly to the gathered media early Monday evening.

“The guilty verdicts in this case reflect Ms. Holmes’s culpability in this large-scale investor fraud, and she must now face sentencing for her crimes,” said Simmons.

Earlier Monday afternoon, the jury had issued a second note reiterating that members could reach a unanimous verdict on three of the 11 counts.

The announcement marked the second time on Monday the jury had informed the court that it was deadlocked on the three charges.

After speaking to the foreperson and polling jury members, Judge Davila sent the jury back to deliberation room to fill out verdict forms on remaining eight counts, indicating that the verdict would be returned Monday afternoon.

The note came after the judge had hours earlier instructed the jury to keep deliberating.

Ramirez also tweeted the news of the jury’s initial note shortly before 11 a.m. 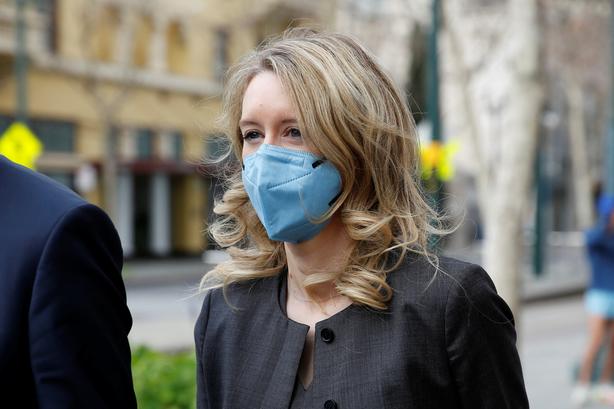 Attorneys on both sides of the case conferred with the judge about how the trial would proceed. The judge then partially re-read jury instructions before sending them back to continue deliberating on the case.

After nearly four months of testimony and 32 witnesses including Holmes herself, the jurors had already deliberated for more than 47 hours wrestling with a verdict.

Once a promising startup worth in the neighborhood of $10 billion, Theranos shuttered its doors in 2018 amid federal investigations, media revelations about the failure of its technology, and dwindling financial resources.

Holmes faced 11 federal charges of defrauding for false claims on the accuracy and success of her failing company’s technology. If the jury had found her guilty on all counts, she could have been sentenced to 20 years in prison and be ordered to pay a $2.75 million fine.

The case has captivated Silicon Valley as overflow crowds lined up each day for a spot in the courtroom. Both Hulu and Apple+ have reportedly greenlighted productions focusing on the trial. Amanda Seyfried would reportedly star as Holmes in the Hulu project and Jennifer Lawrence would take on the role for Apple+.

During the trial and in closing arguments, prosecutors claimed Holmes — who dropped out of Stanford at 19 to start her company — had turned her blood-testing startup into a massive scam.

“She chose fraud over business failure,” he said. “She chose to be dishonest. That choice was not only callous, it was criminal.”

Among those alleged deceptions, Schenk claimed, was using internal documents emblazoned with logos from major pharmaceutical companies to deceive Walgreens into believing those firms had validated Theranos’s technology; claiming the company’s devices were being used at battlefield hospitals by military doctors and projecting a false sense of financial stability.

The deception even carried over to the company’s marketing campaign that used words like “faster” “cheaper” and “more accurate” while using only a microscopic amount of blood.

The concept was so compelling that Theranos and Holmes raised more than $900 million, some of that from billionaire investors such as media magnate Rupert Murdoch and software titan Larry Ellison. The Palo Alto-based company also negotiated potentially lucrative deals with major retailers Walgreens and Safeway. Holmes soon began to grace national magazine covers as a wunderkind.

“When that happens you tend to trust it, you think, ‘Well, my gosh, there has to be something to it if people of this caliber, of this stature are lining up,” Hancock said. “I remember her being so young and people being infatuated by this notion that this young person could do such a thing.

Defense attorney countered that Holmes was a well-meaning entrepreneur who never stopped trying to perfect Theranos’s blood-testing technology and deliver on her pledge to improve health care.

In a dramatic turn on the witness stand in November, Holmes testified that her former lover and business partner Sunny Balwani had been covertly controlling her diet, her friendships and more while subjecting her to mental, emotional and sexual abuse.

Although the testimony cast Holmes as Balwani’s pawn, her defense team did not mention the alleged abuse and its effects on Holmes during closing arguments and he was not called to the stand during the trial.

The 56-year-old Balwani faces similar fraud charges in a separate trial scheduled to begin in February.

Maria Medina contributed to this report.