The proposal to tie university funding to jobs for its graduates within a year needs closer attention.

It’s ingenious, but it leaves more questions than answers. For instance, why one year, which is too short?

Are there any rewards if students get jobs while still in university or even start enterprises? The penalties are well spelt out, but what of incentives or rewards?

The objective of the proposal is to make universities more responsive to the market.

It seems to imply that if graduates of a certain degree programme fail to get jobs, it should be scrapped. Does the proposal factor shocks like Covid-19?

Scrapping a programme means job losses for dons and support staff. Will universities employ their staff on contract to make it easier to lay them off in case graduates fail to land jobs?

What does it mean to get a job? If I studied engineering and land a job, say in marketing, does that render my engineering degree useless?

The proposal needs a broader definition of a job. Many graduates will say driving an Uber car is not a job.What if I am self-employed? What if I inherited a fortune from my father and do not need to work?

The proposal means that universities must keep an inventory of their graduates and where they work. Will this lead to a reduction in the number of students admitted to university to ensure all end up getting jobs?

This proposal could have unintended consequences, with universities likely to encourage their students to stay longer in school pursuing masters or PhDs to ensure they are not counted as unemployed. 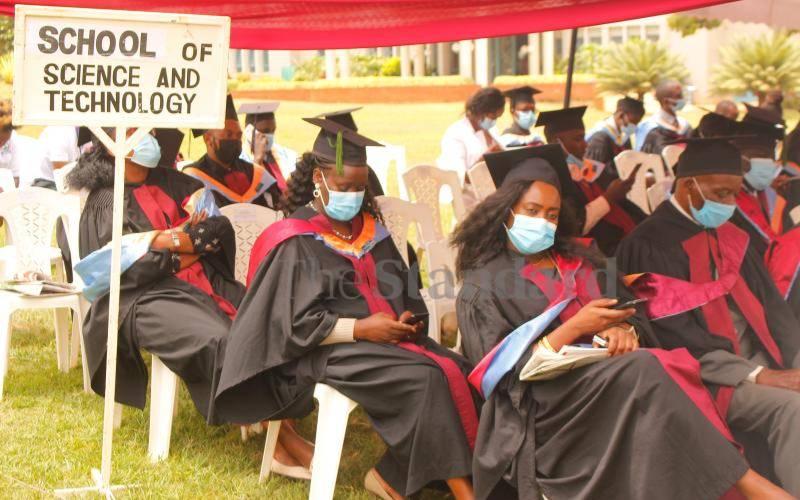 Shall that lead to multiple degrees, costing the economy more? Where will dropouts fall?

This could also lead to “hoarding,” where jobs are held for graduates from certain universities to ensure more funding.

The government has control over funding but not the job market beyond the public service, yet most jobs are in the private sector.

For this proposal to work, regulators (read Commission for Higher Education) should give universities more freedom to start new or marketable degree programmes.

Which university in Kenya today offers a course on China despite its inevitable rise to an economic and political powerhouse?

It seems universities will now come under the spell of Schumpeter’s creative destruction. Better courses will thrive, while others will die.

One intriguing question is what would happen to professors who have dedicated their lives to such courses?

It seems the time for cultic obsession with specialisations is over. We shall have to be flexible. This proposal opens a world of possibilities. Why can’t universities create jobs for their graduates?

But if the proposal is well implemented, universities will become innovative, spawning patents and their commercialisation. Research and teaching will be more practical, away from theory and inert ideas.

The ability to create new enterprises will also wean the universities of public funding and make them more flexible and enterprising just as children emerge from the shadows of their parents, start families and become independent.

Universities will now become more welcoming to ideas from the market too, away from textbooks and journals.They will climb down from their ivory towers.

Ideas will be examined for their practicality and potential to create jobs and not as a means of exciting young minds.

In the West and the East, some of the groundbreaking ideas come from universities.

Examples include Google to Facebook. Will the new funding model lead to the blossoming of such ideas? I wish M-Pesa emerged from one of our universities.

In the proposal, will old and new universities compete equally in this funding formula? Graduates of the older, well-established universities are more marketable.

Their brands are well-known. Compare a graduate of Harvard University established in 1636 with one from Githaka-ini University founded this year.

This formula could lead to the closure of some universities. The remaining universities will be lean and agile, generating new ideas, jobs and national confidence.

Will politics allow it? Noted the political input in the establishment of the new universities? One hopes students will follow these debates and realise they, too, must do their part in making informed career choices driven by market reality and not emotions.

Have you noted that courses with the best sounding names are often the least marketable? They nourish your emotions, not the pocket.

Let us also not forget that job-creation is not about going to school or merely getting adegree; the political and economic environment matters too.

Will both the national and county governments make it easier to create jobs by improving the regulations, infrastructure, business support and reducing costs such as electricity?

This proposal is yet another attempt to make our universities more responsive to the market, society and the future.

But every stakeholder must do their part to make this a reality.

Today, banks are still thinking about how to keep costs under control while providing a frictionless customer experience.