The following is a transcript of an interview with former CISA director Chris Krebs that aired on Sunday, October 10, 2021, on "Face the Nation."

MARGARET BRENNNAN: Welcome back to FACE THE NATION. Last week, a former Facebook employee told lawmakers that the company knew its products were harmful to children and teens, stoked political division and spread disinformation. To help explain it all, we now go to CBS News cybersecurity analyst Chris Krebs. Good morning to you.

MARGARET BRENNAN: What I thought was so interesting about this whistleblower is how clearly, she communicated some things that are frankly often misunderstood or just too opaque. And one of the things that she highlighted was that social media is complicit, frankly, in knowingly allowing their platforms to be used this way. Under current law, internet companies are exempt from liability for what's posted on their platforms. Should that be reformed?

KREBS: Oh, absolutely. I think there were three takeaways that I had, at least, from her testimony and then the 60 Minutes piece last week. First was yes, in fact, she was very well prepared and was very articulate in the way she communicated the issues. The second is that effectively what we're talking about, Facebook and others, are data monopolies. They- they control the information, and they control what's released and available to the public. And the third piece, as you point out, the Communications Decency Act of 19-, what is it 96 or 97, Section 230 that provides immunity to these data companies, these tech platforms and others needs to be reformed and that the algorithms and the- the advertisements and the other ways that the companies generate revenue should- should very likely be- those protections should be stripped away.

MARGARET BRENNAN: So, one of the things that she described was how outrage generates more engagement, that it is literally embedded in the technology to feed the extremes and continue to feed them. Who takes on a bigger role to try to offset some of that?

KREBS: Well, when you step back and you look at whether it's disinformation, misinformation or just online discourse, you have to split it up into a supply and demand problem as I see it. On the demand side, there is still a significant amount of interest in uptake for a lot of the rage that you- that you mentioned. But the platforms, as you know, as we've been talking about, have- they- they generate revenue, they get more engagement for them is a good thing. And those are the sorts of things that we need to- we need to take a harder look at. But as already mentioned, the biggest issue here is that we do not have enough insight and information around these algorithms and what drives the- the sprawl of information. And so, I've likened it to we're in a post-Enron moment where we don't have enough visibility, there's not enough transparency. And so, we're going to need some equivalent of Sarbanes-Oxley that requires these platforms to provide access to security researchers, to journalists, to regulators. And yes, regulation is absolutely- should be on the table for Congress. And I think this is one of those few areas right now where we have an opportunity for bipartisan engagement. 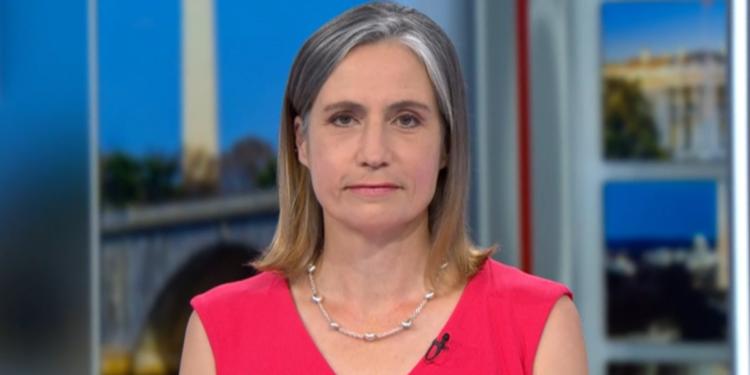 MARGARET BRENNAN: And it's interesting because an AP poll done recently shows that there is recognition that misinformation is a problem and there is bipartisan support. It's just kind of figuring out how to do it. That's the challenge. You know, one of the other places that I know you've looked at that there is some misinformation is on TV, on cable news. And there was a report done by Reuters this week saying that the network AT&T helped build a far-right channel. AT&T denied this, that they had no financial interest in this. But how significant do you think these other platforms are in spreading information that is manipulative?

KREBS: I think that's got to be part of the conversation, the online platforms, because today we might be talking about social media platform- platforms. You know, tomorrow who knows what the technology is going to be. And so, we really have to think through the legal frameworks that provide the- the, you know, the unfettered opportunities out there to- to spread misinformation. But to the point about AT&T and OANN and whether in fact that is true, it is in a, you know, it's in court documents, but it's- that's why it's so important for researchers and journalists to have access so the market can make decisions. With imperfect information, we make imperfect decisions. But this allows the market to vote with their dollars, and I'm probably switching off AT&T personally to another wireless carrier. So, these are the sorts of, and this is the sort of information we need more broadly so that the market can make decisions and that we can make informed sound policy going forward.

MARGARET BRENNAN: You know, talking about politics, you ran the rumor control site for the 2020 election in your previous role when you were within Homeland Security. What you said and the work you did on that is one of the reasons why President Trump fired you. Last night he again stood at a rally in Iowa and called for the complete overhaul of our election systems. These calls are not going away. Do you think that there is an active effort underway to undermine elections as Congressman Schiff started off our program saying?

KREBS: Without question, it's happening at four different levels. Both state legislatures and state elected officials, some of the folks running for secretary of state in Arizona and Georgia, but we're also seeing in the US Congress. The minority whip was on Fox News this morning with Chris Wallace, and he was talking about how the election was effectively stolen. He will not admit that Biden won- that President Biden won fair and square. And so, what we're seeing is- as Congressman Schiff mentioned, is this constant erosion of confidence in the elect- the electoral system. And it is ultimately anti-democratic and we're frankly in a death spiral as I see it. And, you know, two years, four years at the ballot box isn't good enough, and there have to be other accountability measures for those that are going to continue to proliferate these lies.

MARGARET BRENNAN: That's an incredible statement. You're a lifelong Republican, and you are acknowledging and pointing to leadership encouraging some of these things. How is that possible that this continues to happen?

KREBS: I mean, it's- it's base- it's captured by the base, right? I mean, they're- they're afraid to speak up because they're afraid the former president is going to try too primary them. And then the other piece is that they've activated and lost control of their voting base, the people that are going to put him in power. And they know that if they go against the former president that not only will he speak out against them, but they're going to, you know, they're going to start seeing people show up at their town hall. I mean, you've actually seen Republican members of Congress stop holding town halls because they've over activated their base and it's gotten out of control. So again, this is a death spiral. They've lost control and they don't have the ability to rein it back in.

MARGARET BRENNAN: Chris Krebs, thank you very much for your analysis, though you've given me some heartburn. Thank you. It's always good to talk to you. We will be back in a moment.