If OEM system builders adapt NVMe technology for mid-level products, then the SSD aftermarket sellers are in trouble. The XG3 is a fast SSD that anyone would love to own. OCZ will bring it to market as the RevoDrive 400, with updated firmware that will most likely increase performance even more.

For an OEM drive, the Toshiba XG3 is really good. If my next notebook ships with one, I wouldn't feel the need to upgrade on performance alone. I really like MSI's implementation, with two 128 GB XG3 drives in RAID 0. It doubles capacity and gives a nice performance increase.

The XG3 drives are rare and difficult to buy if you really want one.

Toshiba officially announced its XG3 NVMe SSD at Flash Memory Summit in 2015. A few weeks prior, a reader messaged me about an unknown M.2 drive he discovered but couldn't get working. We later determined that the SSD was either a mock engineering sample with nonfunctional parts or an ES part that was tied to a specific system. I've been trying to get my hands on an XG3 for testing ever since.

At Flash Memory Summit 2015, we sat down with Toshiba and learned more about its XG3 NVMe drive. The company has a couple of versions. The first is a M.2 PCIe 3.1 four-lane model, which we're testing today. The second is a two-lane PCIe implementation built for specific OEMs that wanted SATA Express SSDs. That's right, there's a SATA Express version available to exactly one system integrator.

The XG3 M.2 drive earned design wins from a couple of OEMs. MSI chose it for a few new notebooks (that's where our sample came from), and we found an eBay seller with some 128GB XG3s ripped out and replaced with higher-capacity drives from another vendor.

We enjoy looking at OEM SSDs because they allow us to comment on the storage solutions shipping in complete systems. We did reach out to Toshiba before ordering this drive ourselves, but the company is notoriously difficult to work with when it comes to sampling. Toshiba hard drives and SSDs come from different divisions. We recently tested the new Q300 Pro SSD (review coming soon) from Toshiba's retail division, but they hadn't even heard of the XG3 because it's OEM-specific.

Toshiba finished its acquisition of OCZ Storage Solutions in January 2014, and we've already toyed with cross-company collaborations like the Trion 100. In June 2015, OCZ publicly demoed its RevoDrive 400, which is based on Toshiba's XG3. At CES 2016, we spoke with OCZ's Alex Mei about the upcoming product and learned that the firmware will be reworked prior to launch. For us, that makes an early look at the XG3 even more interesting. This will be OCZ's first client-focused NVMe product, and it will compete directly with shipping SSDs from Samsung and Intel.

Best SSDs For The Money 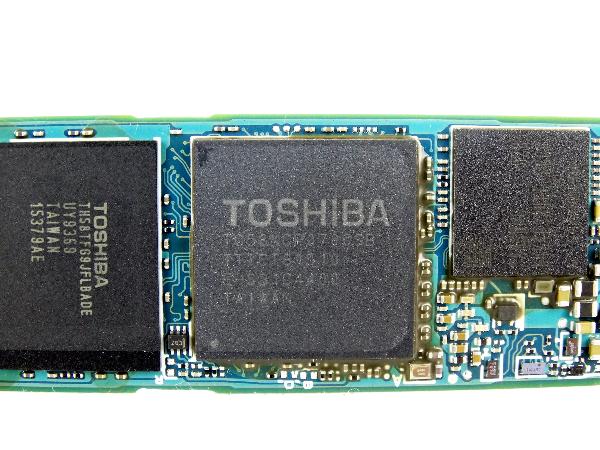 Storage in the Forums

Toshiba hasn't published a lot of information about its XG3 NVMe SSD. The only real performance information is cherry-picked from the largest model, yielding an up-to ceiling for all four capacities. We couldn't find any specifications on random performance, so we generated our own using four workers at a queue depth of four to get a 16 Outstanding Input Output rating. This is similar to the way other vendors with NVMe SSDs determine random performance for their marketing material.

Again, the XG3 is available at four capacity points, but the three largest are like Sasquatch—I know a guy who claims to have seen one, but the pictures are all grainy and out of focus. Not that they don't exist, though. This is a new model, and most drives are in expensive new notebooks. The highest-capacity model has components on both sides of its PCB, while the three smaller ones fit everything on one side.

Three years ago, PCI-SIG announced version 3.1 of the PCIe spec, introducing a L1 low-power state, CLKREQ# signal and a separate REFCLK with independent SSC architecture. We have a pair of NVMe-capable notebooks en route for power testing, but they're not here yet. In a later article, we will test several new NVMe M.2 SSDs for power consumption in our notebook battery life suite.

Toshiba's OEM products don't enjoy the cult following that Samsung's SSDs do. This may be due to availability, because Toshiba has several very good OEM SSDs. Many of them are so good that we often find them in servers.

We paid $80 for a 128GB XG3 M.2 drive, but that's a spot market price. We do not know what Toshiba charges its customers, or what the RevoDrive 400's MSRP will be. At CES, OCZ told us its RevoDrive 400 will compete with Samsung's 950 Pro and that it should sell for a little less.

The XG3 does not ship with a software package. But we learned that OCZ's SSD Guru management utility will support the RevoDrive 400. Company reps had the utility running with a RevoDrive 400 on display at CES.

We were not able to find a Toshiba-specific NVMe driver for the XG3, even after searching MSI's support site for notebooks shipping with the drive. Fortunately, Microsoft enables basic support in Windows 8.x and 10, though. Samsung and Intel both ship model-specific drivers to improve performance in Windows, so perhaps Toshiba has something in the works.

As mentioned, the three lower-capacity XG3s employ a single-sided configuration, while the 1TB model places components on both sides of the PCB. This actually becomes an issue with some notebook upgrades, and is part of the M.2 specification. Ultrabooks leave very little room between the motherboard and chassis. And while we've yet to run into an issue, we expect to at some point.

The XG3 uses a new four-lane PCIe 3.1 NVMe controller. This is the first time we've tested it. Heat wasn't a problem during testing, but our test platform also offers better-than-average airflow over the SSD. Because this is an OEM drive built specifically for notebooks, it may run at lower clock rates to avoid throttling. OCZ already mentioned that its RevoDrive 400 will have different firmware; perhaps the updated software increases the controller's operating frequency.

OCZ also told us that the RevoDrive 400 will ship with Toshiba 15nm MLC flash. Our XG3 has Toshiba A19 NAND. We've tested other products armed with A19 and 15nm flash, and they perform similarly. The 15nm stuff does cost less to manufacture, though.

The XG3 doesn't rely on an emulated SLC buffer to increase burst write speed. It writes data at at a consistent rate, without the dramatic SLC-to-TLC roll-off.

OCZ's Trion 100 delivered different levels of performance depending on whether you were working with compressible or incompressible data. The new Toshiba NVMe controller doesn't have the same issue. It maintains steady performance, regardless of the information you send through it.

Chris Ramseyer is a Contributing Editor for Tom's Hardware US. He tests and reviews consumer storage.