Next week, we’ll be marking fourteen years since

first went on sale, and it’s safe to say that Apple’s revolutionary smartphone has changed the world so much that it’s hard to remember life before the iPhone.

Long before the iPhone came along, however, Apple had already redefined the way we listened to music with the release of the venerable iPod back in 2001. While the original iPod wasn’t the first music digital audio player to come on the scene, it was the one that brought the idea into the mainstream, taking the world of music fans by storm with its simple design and really intuitive user interface.

With millions of tracks from Apple Music and Spotify at our fingertips, it’s hard to imagine that there was a day when you actually had to plan ahead to pick which songs and albums you wanted to listen to and pack some physical CDs in a case to take with you. The iPod changed that in a big way, with even the earliest models promising thousands of songs in your pocket, and by the time that last iPod classic was released in 2009, that number had jumped to 40,000 songs —

roughly equivalent to a 1,400-pound stack of vinyl record albums

, but there was a day when it

referred to an entire family of devices

that was bigger and more varied than the iPhone.

The last iPod classic, which was released in 2009, held on for five years before Apple was forced to discontinue it in 2014 due to the inability to find enough parts to keep making more. It was the last full-sized iPod in a lineup that had lasted for almost 13 years. The smaller iPod nano and iPod shuffle

, although by then they had become shadows of Apple’s venerable iPod family; the iPod nano abandoned the classic click wheel design in 2010 in favour of a more iOS-like touchscreen style.

Fortunately, however, the spirit of the iPod continues to live on among enthusiasts, from

developers working on iPod apps for the iPhone

Unfortunately, many of these throwbacks aren’t readily accessible by anybody other than developers and hackers, since Apple

takes a dim view of apps that copy its hardware designs 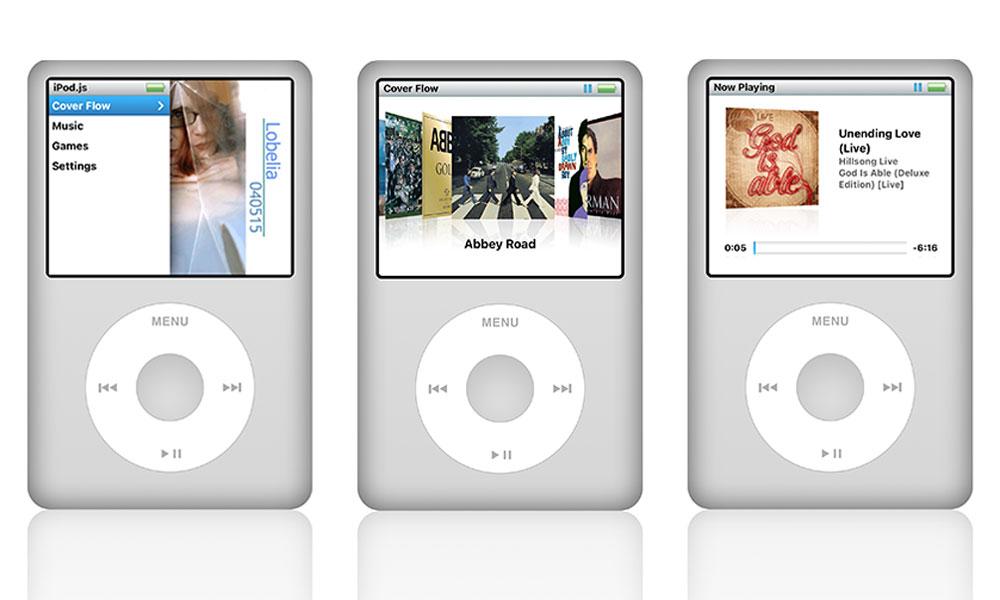 An iPod on the Web

Fortunately, however, it’s much harder for Apple to shut things down on the open web. So, if you’ve never had the pleasure of playing with an original iPod, or you’re simply feeling nostalgic and want to relive the glory days of Apple, you can now do so right in your mobile Safari browser.

to give you the classic iPod experience.

Of course, there’s one big difference between Villarete’s virtual iPod classic and a real one — instead of loading music onto a hard drive, you’ll be able to stream anything you like from your Spotify or Apple Music account.

The iPod web app uses the standard APIs offered by both Apple Music and Spotify to let you log directly into your preferred streaming service, at which point your entire library — playlists and all — will be available in the traditional iPod user interface, just like it was loaded right onto a physical iPod classic.

In fact, it’s so realistic that it’s enough to bring back memories for anybody who had an actual iPod classic back in the day. This is especially true if you’re still using the same basic library in Apple Music, as all the songs and album names will look eerily familiar.

In my case, I actually pulled out my fully functional 160GB 2007 iPod classic, which still contains my full music library as it existed the last time I synced it with iTunes several years ago. I found many of the same familiar artists, albums, and artwork showing up on my physical iPod screen as on the virtual web-based iPod coming from Apple Music. It felt like a real blast from the past.

Villarete has built a fantastic experience here, and he’s even included a Brick Breaker clone game as a throwback to the era of iPod Games, and the cool Cover Flow view that lets you flip through albums jukebox-style. Unfortunately, one thing that you won’t find here is the Search feature that was introduced on the “5.5G” iPod classic back in 2006.

This means that you’ll be left scrolling through your Apple Music or Spotify libraries using the click wheel. Plus, there’s no way to access any tracks from those streaming services that you haven’t already added to your library.

Still, it’s fair to say that this is a labour of love that’s designed primarily to help people enjoy and appreciate the bygone era of the iPod. It’s not something we expect that most people will want to rely on as an actual everyday music player.

It also remains to be seen how tolerant Apple is going to be regarding this particular project. The company has

made a lot of noise recently

about how it’s allowing “the open Internet and web browser apps” to be used to “reach all users outside the App Store,” particularly when it comes to game streaming services.

On the other hand, however, this is a matter of Apple’s trademarks and copyrights, and we all know how

aggressive — and sometimes silly — the company can get when defending those

. Apple has already blocked at least two iPod-style music players from the traditional App Store, but we’re hoping that the free and open-source nature of Villarete’s web project will encourage Apple to see it for what it is — a wonderful homage to a much simpler time.