SINGAPORE - The Institute of Systems Science (ISS) at the National University of Singapore (NUS) has moved into its new home, 40 years after its humble beginnings as part of the NUS Computer Centre that was to birth Singapore's first connection to the Internet.

The new ISS building has double its previous capacity of classrooms and staff offices, and was completed after two years of construction.

As befits an institute of continuing education focused on information technology, it is wired up with state-of-the-art technology to help both students and educators adopt hybrid and blended learning methods.

It also features common spaces such as a rooftop garden terrace and a courtyard designed like an oasis, wrapped by a new curved facade.

The nine partners are in various sectors, ranging from healthcare charity Kwong Wai Shiu Hospital to the Bank of Singapore (BOS). 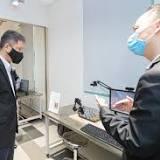 ISS chairman Janet Ang announced the new partnerships during the official opening of its expanded and refurbished building at the NUS campus on Monday, with Education Minister Chan Chun Sing as guest of honour.

In her speech at the ceremony, Ms Ang, who is also a Nominated MP, said the new building marked ISS' signature investment for the next generation of digital talent, having already trained more than 157,000 people from over 8,000 organisations in the public and private sector since its inception in 1981.

Of the new partners, she said: "(These) industry partners are taking bold steps in the digital transformation journeys for their respective communities and we thank them for entrusting ISS to play a role in turning their digital ambitions into reality."

The institute also showed its appreciation for two of its existing key partners: digital services firm NCS and statutory board Government Technology Agency (GovTech) at the event.