Home » Technology » The Problem with Blaming Robots for Taking Our Jobs

In the late nineteen-forties, Delmar Harder, a vice-president at Ford, popularized the term “automation”—a “nickname,” he said, for the increased mechanization at the company’s Detroit factory. Harder was mostly talking about the automatic transfer of car parts between machines, but the concept soon grew legs—and sometimes a robotic arm—to encompass a range of practices and possibilities.

From the immediate postwar years to the late nineteen-sixties, America underwent what we might call an automation boom, not only in the automotive sector but in most heavy-manufacturing industries. As new technology made factory work more efficient, it also rendered factory workers redundant, often displacing them into a growing service sector. Automation looks a little different these days, but the rhetoric around it remains basically the same. Popular discourse alternates between a vision of benevolent machines—ones that could, say, carry out dangerous or gruelling tasks—and one of job-stealing robots. Such talk frequently swells in moments of technological innovation. (Think of the birth of the personal computer, or, more recently, of the rise of Amazon.) COVID-19 only intensified this anxiety, as labor shortages, and the pressure to keep people safe, gave companies new opportunities to automate. Are robots really, finally, going to replace us?

Two recent books suggest that we shouldn’t believe the hype. As Aaron Benanav’s “Automation and the Future of Work” (Verso) and Jason E. Smith’s “Smart Machines and Service Work: Automation in an Age of Stagnation” (Reaktion) remind us, talk of automation is hardly new, dating as far back as 1835, when the Scottish theorist Andrew Ure praised “the automatic factory.” Both books cite a range of writing on automation, positive and critical, to present a different view of our moment. The future might have fewer jobs, but it probably won’t be because of robots. In fact, we are living not so much in the dawn of peak automation as in something like its long, drawn-out twilight.

If automation is on the rise, why are its fruits so hard to find? The reality is that, from an economic perspective, it hasn’t been working for a while now. In 1987, the economist Robert Solow quipped, in the Times, that “you can see the computer age everywhere but in the productivity statistics.” Solow observed this “productivity paradox” at a moment when America was rapidly deindustrializing, despite a spate of advancements in information technology. (In 1982, Time named the computer Machine of the Year.) Typically, the paradox is ascribed to inadequate data tracking, or to new technology taking a while to be integrated into the workplace. But Benanav and Smith seek to recover Solow’s insight, which upends several tenets of mainstream automation theory.

Benanav, an economic historian based in Berlin, begins by surveying the field. In an era of increasingly high-tech innovation, the story has gone something like this: machines have become smarter, no longer simply displacing manual work but threatening skilled and service work alike. This prospect has been received with dread and optimism. On the one hand, popular accounts such as Erik Brynjolfsson and Andrew McAfee’s “The Second Machine Age” and Martin Ford’s “Rise of the Robots” fear a future in which smart machines obviate human workers entirely, forcing us to establish some form of guaranteed basic income. On the other hand, a branch of left-wing futurists, galvanized by the 2008 crisis, envisions a techno-utopia achieved through full automation and a universal basic income. In books like Nick Srnicek and Alex Williams’s “Inventing the Future” and Peter Frase’s “Four Futures,” this strand of automation theory offers a radical vision of a post-scarcity society, where robots do the work and humans get to play. 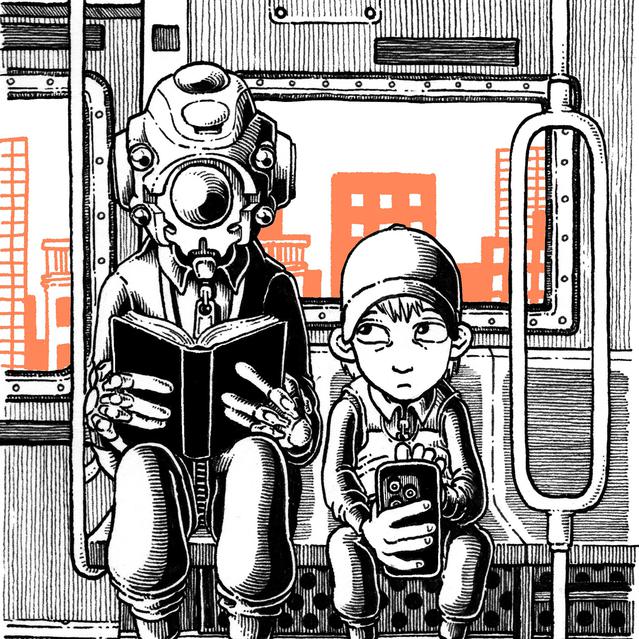 Benanav believes that the futurists have lost the plot, but he also seeks to convey the appeal of the stories they tell. Benanav’s own fascination with automation narratives began in childhood, during the eighties and nineties, when he became obsessed with science-fiction novels. The draw of automation theory, he argues, lies in its ability to “point to certain utopian possibilities latent within capitalist societies”—an ideal that inspired many visionary socialists during the twentieth century, including Herbert Marcuse, James Boggs, and André Gorz. It’s hardly surprising that the subject is hot again, Benanav writes, given how the supposed “consequences of automation are all around us: global capitalism is failing to provide jobs for many of the people who need them.”

Yet if some see this situation as an opportunity—a chance to create a new, just society—Benanav presents it in the context of a more sombre economic history. Taking up the work of his graduate adviser, Robert Brenner, he argues that, in the postwar manufacturing boom, countries such as the U.S., Germany, and Japan produced the same goods in increasingly absurd amounts. In industry after industry, supply began to far outstrip demand. This phenomenon—overcapacity—led to what Brenner called a “long downturn” of economic stagnation, in which companies were forced to invest less and less in production. In other words, automation theorists are right to observe a decline in jobs; they’re just wrong in attributing it to technological advancement.

“Automation and the Future of Work” methodically filters automation theory through the lens of overcapacity. For Benanav, it’s especially crucial to consider the problem’s global dimension; he believes we too often adopt an American frame, as though the rise of robots would merely move manufacturing markets abroad. But deindustrialization is an international trend, with overcapacity affecting even those working in, for example, China or the Global South. The result is that productivity will continue to shrink worldwide, producing fewer and fewer jobs, not just for those living in high-income countries but for everyone.

This poses a few problems for automation theorists. First, the very fact of overcapacity means that economic growth is unlikely, and this results in fewer companies being able, or willing, to invest in new automation technology. Second, rising levels of unemployment mean more workers are vying for jobs, and competition both keeps wages low and further reduces incentives to invest in automation. In this way, Benanav writes, automation optimists mistake “technical feasibility” for “economic viability.” Why would companies throw money at a machine that might work tomorrow, when there are plenty of humans willing to work for much less today?

Solow’s paradox describes a kind of ironic landscape—a world in which technology remakes our relationship to commerce, consumption, and each other, but has little effect on productivity in the workplace. As Smith, a critic based in Los Angeles, writes in “Smart Machines and Service Work,” our gadget-heavy environs can give the impression that we’re living in a time of immense technological innovation. But, in his account, most of our age’s central inventions— the radio, the telephone, popular photography, and cinema—emerged during the nineteenth century, with today’s signal breakthroughs representing little more than recombinations of prior forms. Take the iPhone, which Smith describes as “the layering into a single device of an array of by-now near-ancient technologies: a twenty-first-century Swiss army knife, combining the telephone, personal computer, camera and video recorder in a single, pocket-sized, consumer good.” For Smith, the iPhone is a deceptive technological protagonist—one that gets introduced, tellingly, in 2007, on the cusp of an economic crisis.

The smartphone is the poster child of what Smith calls Automation 2.0: the idea that what will be automated, going forward, is not manufacturing but the service sector. Here, too, he sees little reason for optimism. In the past two decades, humans haven’t seen gains in labor productivity or wages; instead, they’ve just experienced lousier forms of work. The late anthropologist David Graeber called this the rise of “bullshit jobs,” but Smith takes a more measured approach, drawing a distinction between “unproductive labor”—that is, work that does not produce value but that only circulates or redistributes it—and “productive labor.” Productive labor adds value, or capital, into the economic system, with the most capital-intensive markets historically being those in manufacturing. Unproductive labor is most everything else, from education to management to finance, along with much of what is often described as service work. (Neither classification has to do with the social or moral value of the work, of course.) One grows the economy through production; the other type of labor simply moves money around.

Smith uses these relatively old-school concepts, inherited from classical political economists like Adam Smith, to counter contemporary automation theorists. In the first place, he doesn’t believe that machines can replace much service labor—something like teaching, for example, relies too much on intuition, personal judgment, and social mediation to be mastered by an automated program. But he also argues that, because many economists don’t differentiate between productive and unproductive labor—and because deindustrialization has shifted the population toward the latter—we overestimate how much automation will help the economy. Smith’s careful study of unproductive labor reveals a basic truth: that, although automation aspires to the full replacement of human workers, it more usually involves the slow disintegration and reallocation of specific tasks. Companies like Uber or Lyft, for example, partly automate work by outsourcing supervision and oversight (both forms of unproductive labor) to an app. When I talked to Annie McClanahan, a U.C. Irvine English professor working on a book about the gig economy, she told me that automation today looks uncannily like automation during Marx’s nineteenth century; we’re returning to pre-industrial methods of wage payment, like the piece rate and tips, with a lot of work being done at home. “The seamstress paying for her own scissors and sewing machine is the same as the Uber driver paying for his gasoline,” McClanahan said.

Perhaps the greatest insight from Smith and Benanav is that, in some ways, the rise and fall of automation discourse is a richer subject than automation itself. The debate becomes a kind of historical index—a sign of the times, even if it doesn’t always accurately describe the times. McClanahan noted that, despite care work and service work being among the hardest things to automate, “almost all of our popular cultural production about robots imagines them in precisely these jobs. Consider the Jetsons or Kubrick’s A.I. or, more recently, ‘Ex Machina’ and ‘Westworld’: it’s all about robot nannies, robot maids, robot bartenders, robot sex workers.” When we fantasize about robots, we correct for—or displace—our own anxieties, our sense that society, as structured, leaves too many humans unfulfilled, immiserated. Instead of wondering what machines could or should do, we might ask why we’re turning to them in the first place.