Home » Technology » The 25 Most Popular Video Games in America

Take a look below for a rundown of the best-selling video games ever released in the U.S.

Peter Stieglbauer, CEO of gaming company PolyReality, suggests the popularity of the most recent titles in this rundown proves just how advanced the industry has become.

"The U.S. has always undoubtedly been the dream machine for gaming entertainment, he told

. "My Top Five games include

is and stays one of the most played and enjoyed games, you just can chill and relax.

took MMORPGS to unimaginable heights. So did Valve with the

titles, they raised the bar for the complete gaming industry.

for the versatility as a Shooter game.

"These games all contributed to the great gaming industry and are a testament to brilliant American game creators."

Read on to discover the best-selling video games ever released in America.

Released as a launch title for the

Entertainment System (NES), gamers are tasked with testing their reflexes with the Zapper light gun to target moving ducks as they fly across the screen.

Nintendo's promotional strapline reads: "If the ducks go down, you win. If the shots go wide, you'll suffer your hunting dog's sniggering!"

Version are role-playing video games developed by Nintendo for its Game Boy Color.

Players trade with and battle rivals as they travel across the Johto region and hunt rare Pokémon eggs.

is an open-world action role-playing video game released on all the most popular consoles.

Players lead their Dragonborn character on quests across an expensive map to defeat a dragon prophesied to destroy the world.

Visitors wait to try out the latest version of Call of Duty Modern Warfare during the press day at the 2019 Gamescom gaming trade fair on August 20, 2019 in Cologne, Germany

Windows, PlayStation 4 and Xbox One.

players can control the

and British SAS as they collaborate and battle against Russian forces who have launched an invasion.

is the first expansion pack for the action role-playing video game Diablo III and is available on all the most popular consoles.

Players control a hero and attempt to capture a mysterious all-powerful artifact the Black Soulstone.

The Witcher 3 / Hearts of Stone / Blood and Wine

This role-playing game and its subsequent two action packs allow people to explore an open fantasy world with a third-person perspective.

Available on all the most popular consoles, each of the popular Downloadable Content (DLC) adds up to 40 hours of gameplay to

This lighthearted physics puzzle-platform game is available on all the most popular consoles and computers.

Players control a wobbly human who keeps dreaming about surreal places filled with puzzles where he is yet to discover the exit.

Super Mario and his friends must collaborate as they chase after and battle Bowser Jr., who has run away with Princess Peach.

This popular platform video game is another in the

series, developed specifically for the

Players control Mario as he fights his way through Bowser's henchmen to rescue Princess Peach.

This life simulation game was developed exclusively for the Nintendo Switch. 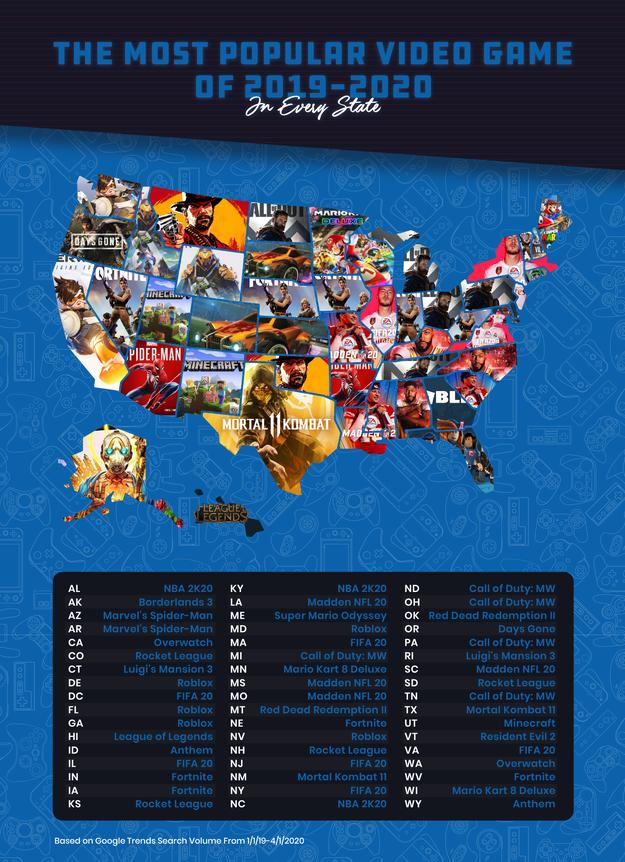 Players control a character on a deserted island and develop and customize their new home as they choose.

Wii Sports Resort: This sports simulation video game developed by Nintendo for the Wii is notable for being one of the first titles incorporating the Wii MotionPlus accessory

This sports simulation video game developed by Nintendo for the Wii is notable for being one of the first titles incorporating the Wii MotionPlus accessory.

is a 2D single and multi-player video game available on all the most popular consoles and computers.

allows a player to both create, explore and defend a world at their leisure.

is an online action-adventure game developed by Rockstar and available on PlayStation 4, Xbox One and Microsoft Windows.

Players control an outlaw in the vast Wild West and must battle to survive government forces, rival gangs and numerous other adversaries.

This sixth installment in the

series was developed by video games giant Nintendo for the Wii.

The multiplayer-oriented racing game introduced new key elements, such as increasing the number of racers to 12 and including bikes in the franchise for the first time.

An employee plays the video game Pac-Man (1980) during an exhibition preview featuring 14 video games acquired by The Museum of Modern Art (MoMA) in New York, March 1, 2013

This legendary maze action game developed by Namco for arcades in 1980 has an enduring commercial and cultural legacy.

The player must guide a hungry character through an enclosed maze while avoiding four ever-accelerating chasing ghosts.

was included in both the U.S. and European releases of Nintendo's Game Boy.

The deceptively simple game aims to manipulate shapes, each composed of four square blocks, as they descend.

This innovative exergaming video game, and its

enhanced version, was created by Nintendo for its Wii console

uses a unique peripheral, on which the player stands during exercise while tracking the player's center of balance.

This kart racing game developed by Nintendo was released for the Wii U console.

franchise characters are as usual controlled in multiplayer kart racing, but the game introduces anti-gravity driving on walls or ceilings.

Players are put in control of a character from an overhead perspective and navigate the world of Kanto as they attempt to master Pokémon battling.

Super Mario Bros: This platform game developed for Nintendo's NES was the first successor to the innovative 1983 arcade game M

Frequently cited as one of the greatest video games of all time, players control Mario—and the character's brother Luigi in the game's multiplayer mode— while racing through the Mushroom Kingdom.

This is an online multiplayer battle royale game available on all the most popular consoles and computers.

Battlegrounds is a player-versus-player shooter game in which up to one hundred characters bludgeon each in a brutal, large-scale, last-man-standing deathmatch.

This sports simulator was developed by Nintendo and included as a pack-in game for the Wii console.

Players use the Wii Remote to mimic actions performed in real-life sports, including tennis, baseball, bowling, golf and boxing.

The puzzle video game received a new lease of life after

The gameplay was nearly identical in gameplay to other Tetris titles, but with a new soundtrack, as well as introducing the new Marathon and Magic modes.

This action-adventure game developed by Rockstar is available on all the most popular consoles and computers.

frequently ranks as among the best video games ever made for its vast open-world design, allowing players to freely roam both city of Los Santos, based on LA, and the surrounding open country.

Minecraft: This sandbox video game available on Windows, macOS and Linux has been cited as one of the greatest video games of all time

This sandbox video game available on Windows, macOS and Linux has been cited as one of the greatest video games of all time.

players explore a blocky, procedurally-generated 3D world with virtually infinite terrain where they chose to do almost anything: from fighting computer-controlled mobs to cooperating with ,or competing against, other players in the same universe.