We are excited to bring Transform 2022 back in-person July 19 and virtually July 20 - 28. Join AI and data leaders for insightful talks and exciting networking opportunities. Register today!

Catalog, a Boston, Massachusetts-based company developing what it claims is the world’s first DNA computer, today announced that it raised $35 million in a series B funding round led by Hanwha Impact Partners. The company says that it plans to use the capital to launch its chemical-based computing platform by next year, where data management and computation occur through the manipulation of synthetic DNA.

As conversations continue on the electricity traditional computing requires to process large volumes of data, interest in chemical-based DNA computing systems is gaining momentum. While DNA computers tend to have slow processing speeds and produce answers that can be difficult to analyze, they can make a high amount of parallel computations owing to the millions to billions of molecules within that interact with each other simultaneously.

“DNA-based computing means everything happens at a chemical level, where traditional boundaries between storage, memory, and computation are blurred and often nonexistent. This allows for levels of parallelism previously unimaginable while spending far less energy than previously possible,” Catalog cofounder and CEO Hyunjun Park told VentureBeat via email.

DNA computing is an emerging branch of computation that leverages DNA, biochemistry, and molecular hardware instead of traditional electronics. Leonard Adleman at the University of Southern California kickstarted the field in 1994, when he demonstrated a proof-of-concept use of DNA as a form of computing hardware. In 1995, the idea for DNA-based memory was originated by Eric Baum, who hypothesized that a vast of amount data could be stored in a tiny amount of DNA due to its ultra-high density. 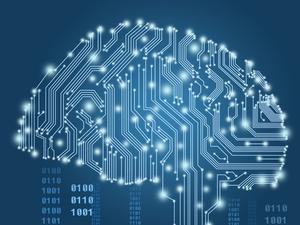 Traditional computers use a series of logic gates — made up of transistors, usually — that transform different data inputs into outputs. But with DNA, molecules can be triggered to bind with each other to create a circuit of logic gates in test tubes.

Catalog was founded in 2016 by two MIT scientists with the goal of developing a commercially viable product for DNA-based storage, which Park claims is up to 1 million times more dense than today’s current storage technologies. In working over the past year with companies in IT, media and entertainment, and energy, Catalog’s research scientists developed an automated system for DNA storage, which they assert is the first not confined to wet lab chemistry.

A hard drive’s typical storage ratio is about 30 million gigabytes per cubic meter. Catalog’s method can store 600 billion gigabytes in the same volume. The company developed an encoding scheme and combinatorial approach that allows for what it claims are “dramatic” cost reductions and throughput, making DNA-based storage and computation economically viable.

The potential applications of DNA computers span security, cryptography, memories, disks, and robotics. Researchers have also shown in early-stage work how DNA computers might be used for extremely accurate detection of certain cancers.

“Catalog has discovered broad applicability of our platform across industry sectors, as well as nearly universal demand for what DNA-based computing promises among heavy data users,” Park added. “Early [use cases] that we are able to speak about at the moment include digital signal processing, such as seismic processing in the energy sector, and data base comparisons such as fraud protection and identity management in the financial industry.”

Gartner predicted in a recent report that by 2024, 30% of digital businesses will mandate DNA storage trials –addressing the exponential growth of data poised to overwhelm existing storage technology. “Technologies are being stretched to their limits,” Gartner VP analyst Daryl Plummer, the lead author of the research, said during a recent presentation at the virtual Gartner IT Symposium/Xpo 2020. “Nontraditional approaches will enable the next rebound of innovation and efficiency … All of human knowledge could be stored in a small amount of synthetic DNA.”

Of course, Catalog isn’t the only team investigating DNA computer technologies. A partnership between IBM and Caltech was established in 2009 aimed at putting “DNA chips” into production, and a California Institute of Technology group is working on the manufacturing of nucleic-acid-based integrated circuits that can compute whole square roots. Beyond this, last year, Microsoft, Twist Bioscience, Illumina, and Western Digital formed the DNA Storage Alliance, of which Catalog is also a part.

But Park believes that Catalog is well-positioned to compete in the nascent market. To date, the 20-person company has raised more than $45 million in venture capital from backers including Horizon Ventures and Airbus Ventures.

VentureBeat's mission is to be a digital town square for technical decision-makers to gain knowledge about transformative enterprise technology and transact. Learn more about membership.