Superintendent Grenita Lathan announced Tuesday that Springfield Public Schools will take immediate steps to curb the use of district-issued devices among young students as it launches a large-scale review of the role technology will play in the teaching and learning process.

The review will examine how devices are used during the school day and beyond, how well the district is able to safeguard students, and what role devices play in instruction and academic achievement.

"We want our students to be exposed to technology but we do want to think about what that screen time looks like, especially for our youngest students but also monitoring what our middle and high school students are doing," she said.

Springfield, like many other large districts, relied heavily on technology during the COVID-19 pandemic, especially when students were learning remotely.

With students once again learning in person full-time, district officials agreed it was time to recalibrate technology usage.

Parents have repeatedly raised questions about technology use in the district in emails and during the public comment sections of board meetings.

Board members — especially vice president Maryam Mohammadkhani and Kelly Byrne, sworn in this month — raised questions at the April 12 meeting about the appropriate level of technology use and access in the district.

More:Board debate: Should Springfield Public Schools scale back technology use in lower grades?

Lathan said Tuesday that she appreciated all the questions from board members and the input from families.

She announced that starting this summer, elementary students will not be allowed to take home their Google Chromebooks unless they are enrolled in the district summer program, Explore.

"Prior to this year, all devices went home during the summertime so that change will be made immediately," she said.

This fall, students in preschool through fifth grade will be able to access a device during the school day but not take them home daily.

"Parents will have the option to check out a device and, if they need to, a hotspot," she said. " ... They will not go home every day."

The district currently turns off access to elementary devices from 10 p.m. to 6 a.m. daily and will look at expanding that and adopting a similar timeframe for middle school.

Mohammadkhani said the first part of solving any problem is to recognize the issue.

She said the district is "committed to moving away from this over-reliance on screens in delivering curriculum."

The board is expected to have input in any proposed changes along with parents and teachers. Mohammadkhani said she hopes the result will be a better balance between the use of digital and print curriculum resources.

"We want our students to all graduate being tech-savvy and ready for the digital world but also, as one of the speakers mentioned, have penmanship and have all those things that make them whole, productive members of members of our society," she said. 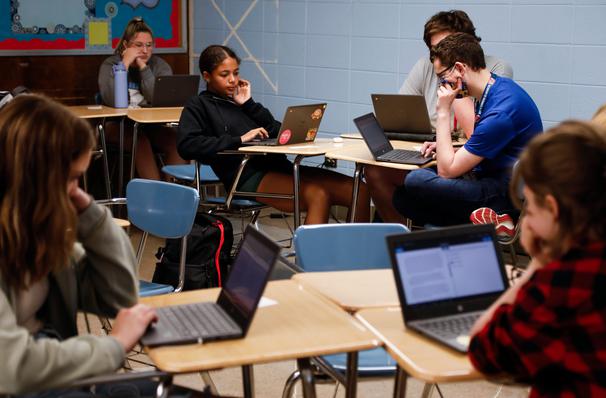 Why did Springfield schools start using the computers and tablets?

Seven years ago, former superintendent John Jungmann, with the backing of the board, launched a three-year technology initiative called Ignite.

The stated goal was to level the playing field by putting "modern tools and resources" in the hands of teachers and students.

The implementation was staggered and by the third year, there were enough devices for each student in grades 3-12. At that point, iPads were available as needed for students in the earlier grades.

Over time, the district added more devices in the earlier grades. The current technology distribution includes:

In 2020, when the pandemic hit Missouri and shuttered schools, the district acted quickly to ensure each student had a device to learn virtually.

Lathan, who joined the district July 1, said reviewing technology use in the district was part of her entry plan.

She said the state-mandated exams, including Missouri Assessment Program tests in reading and math in grades 3-8 and end-of-course exams administered in high school, are taken online.

Board agrees to issue funds for more Chromebooks, which sparked debate

Each year, the district asks the board for money to lease a batch of Chromebooks — in an effort to refresh roughly a third of student devices annually.

The request was made at the April 12 meeting, the first for new board members Byrne and Steve Makoksi.

This year, the scaled-back request — approved Tuesday in a 7-0 vote — ignited a debate about the role of technology in the classroom and what happens when they are sent home. There was even talk of the board rejecting it.

Both Byrne and Mohammadkhani voiced concerns about too much screen time and who is monitoring what students access online, during and after the school day.

They also questioned the practice of assigning a device, which can be taken home, to each child in the earliest grades.

Following the presentation, Mohammadkhani thanked Lathan for listening to concerns and making changes. "I think we're moving in the right direction."

Makoski praised Lathan for being open about exploring the concerns raised by parents and board members.

"I really have to tip my hat to Dr. Lathan that the transparency has been there. I think, sometimes, it doesn't appear that way to the public," he said. "But I just wanted to help reassure that ... we definitely have opened up some lines of communication through this process, especially over the last couple of weeks."

Board member Scott Crise applauded the district's willingness to listen to the board and its interest in doing a "deep dive" into technology usage.

"We are not here to micromanage you," he said. "We need to let you do your job."

Board member Shurita Thomas-Tate said members may disagree on the processes and procedures but all want good outcomes for students.

"All of us want those same things so whatever ... needs to be done in order for students to achieve, I think we're all on board for that," she said.

Claudette Riley is the education reporter for the News-Leader. Email news tips to criley@news-leader.com.