Home » Technology » Something you need to know about Arduino

is an open-source platform that is based on easy-to-use hardware and software. Arduino board design use of the various microcontroller and microprocessor and the boards are equipped with the various sets of the analog and digital input and output pins that could be an interface to various boards and other circuits. The Arduino board uses the serial communication interface including a universal serial bus which could be used for loading the programs. The Arduino board mainly used the AT mega type of microcontroller which could be programmed using C and C++ programming language with the use of standard API also called Arduino language. The Arduino Integrated Development Environment is also available where the program codes could be compiled.

Arduino was first started to create devices that could interact with the various other actuators and sensors.

. The hardware and software designs are freely available. Most of the Arduino boards consist of the Atmel type 8 bit microcontroller. Some of them include Atmega 8, Atmega168, Atmega328, Atmega 1280 with various features, pins, and flash memory. Multiple stacked shields could be addressed through an I2C serial bus. Most of the boards include the 5V linear regulator and the 16MHz of the crystal oscillator.

The microcontroller is preprogrammed with the boot loader that simplified the uploading of the programs to the on-chip flash memory. Boards are loaded with the program code through the serial connection to another computer. Some of the Arduino boards contained the level shifter for the conversion between the logic level of RS-232 and the TTL level signal. The current Arduino boards are programmed through the universal serial bus which is implemented using the USB to serial adapter chips. Some of the spark fun electronics and the ADA-fruit industries have been designing the boards.

The program for any Arduino hardware could be written in any of the programming languages with the compilers that could produce the binary machine code for the targeted processor. Atmel provided the development environment for the32 bit ARM cortex and the 8-bit AVR. Arduino supported the IDE which is the cross-platform application that is written in Java Programming Language. The IDE supports all platforms; Windows, macOS, and Linux. The source does for the IDE is released under the version of GNU. The IDE also supplies the software library from the wiring project that provides many of the common input and output processes. The Arduino IDE employed the program for converting the executable code into the text file in the hexadecimal encoding which is loaded into the Arduino board using the loader program in the board of firmware. The IDE supports the various libraries.

Arduino boards made use of the printed circuit expansion board called the shield which is plug into the supplied Arduino pin headers. Motor control for many applications, satellite navigation, Ethernet, LCD, and 3D printing could be provided by the shield. The adafruit motor shield made use of the I2C requiring fewer digital input and output pins than attaching each motor directly.

Some shield offers the stacking header that allowed the multiple shields to be stacked in the top of the Arduino board. The screw terminal breakout shield allows the bare end wire to be connected to the board with no requirement of the specialized pins. 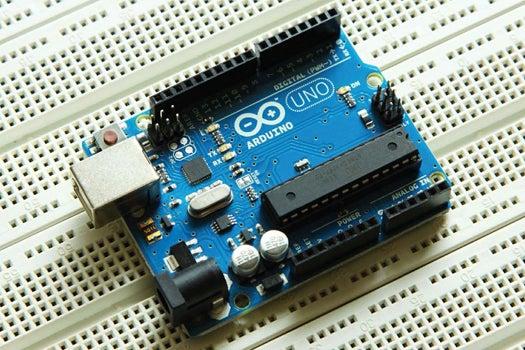 The sketch is the program that is written in the Arduino IDE. The sketch files are saved into the computer as text files with the file extension of .ino. the Arduino program consists of two functions including setup and loop.

The various available types of Arduino boards are as follows:

It is based on the microcontroller Atmega 2560 with 54 input and output pins.

It uses the Atmega 16U2 in place of 8U2 that allowed faster memory transfer. The board used ATmega 328 microcontroller.

This board is based on ATmega32u4with 20 digital input and output pins.

The board is designed to integrate the e-textile and wearable projects.

The board is programmed with the use of a USB cable of mini B. The board uses the USB and the FTDI chips.

Note: You can find your required components from our website: