Humans experience the world in three dimensions, but a collaboration in Japan has developed a way to create synthetic dimensions to better understand the fundamental laws of the Universe and possibly apply them to advanced technologies.

They published their results on January 28, 2022 in Science Advances.

“The concept of dimensionality has become a central fixture in diverse fields of contemporary physics and technology in past years,” said paper author Toshihiko Baba, professor in the Department of Electrical and Computer Engineering, Yokohama National University. “While inquiries into lower-dimensional materials and structures have been fruitful, rapid advances in topology have uncovered a further abundance of potentially useful phenomena depending on the dimensionality of the system, even going beyond the three spatial dimensions available in the world around us.”

Topology refers to an extension of geometry that mathematically describes spaces with properties preserved in continuous distortion, such as the twist of a mobius strip. When combined with light, according to Baba, these physical spaces can be directed in a way that allows researchers to induce highly complicated phenomena.

In the real world, from a line to a square to a cube, each dimension provides more information, as well requires more knowledge to accurately describe it. In topological photonics, researchers can create additional dimensions of a system, allowing for more degrees of freedom and multifaceted manipulation of properties previously inaccessible.

“Synthetic dimensions have made it possible to exploit higher-dimensional concepts in lower-dimensional devices with reduced complexity, as well as driving critical device functionalities such as on-chip optical isolation,” Baba said. 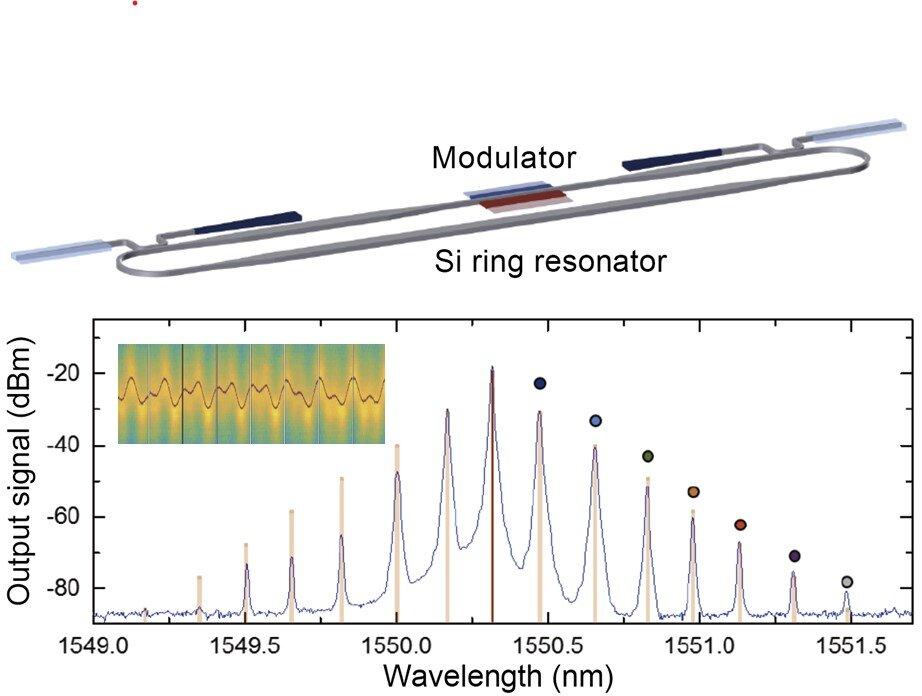 The researchers fabricated a synthetic dimension on a silicon ring resonator, using the same approach used to build complementary metal-oxide-semiconductors (CMOS), a computer chip that can store some memory. A ring resonator applies guides to control and split light waves according to specific parameters, such as particular bandwidths.

According to Baba, the silicon ring resonator photonic device acquired a “comb-like” optical spectra, resulting in coupled modes corresponding to a one-dimensional model. In other words, the device produced a measurable property — a synthetic dimension — that allowed the researchers to infer information about the rest of the system.

While the developed device comprises one ring, more could be stacked to cascade effects and quickly characterize optical frequency signals.

Critically, Baba said, their platform, even with stacked rings, is much smaller and compact than previous approaches, which employed optical fibers connected to various components.

“A more scalable silicon photonic chip platform provides a considerable advancement, as it allows photonics with synthetic dimensions to benefit from the mature and sophisticated CMOS commercial fabrication toolbox, while also creating the means for multi-dimensional topological phenomena to be introduced into novel device applications,” Baba said.

The flexibility of the system, including the ability to reconfigure it as necessary, complements equivalent static spaces in real space, which could help researchers bypass the dimensional constraints of real space to understand phenomena even beyond three dimensions, according to Baba.

Other contributors include Armandas Balčytis and Jun Maeda, Department of Electrical and Computer Engineering, Yokohama National University; Tomoki Ozawa, Advanced Institute for Materials Research, Tohoku University; and Yasutomo Ota and Satoshi Iwamoto, Institute for Nano Quantum Information Electronics, The University of Tokyo. Ota is also affiliated with the Department of Applied Physics and Physico-Informatics, Keio University. Iwamoto is also affiliated with the Research Center for Advanced Science and Technology and the Institute of Industrial Science, The University of Tokyo.

The Japan Science and Technology Agency (JPMJCR19T1, JPMJPR19L2), the Japan Society for the Promotion of Science (JP20H01845) and RIKEN supported this research.

Yokohama National University (YNU or Yokokoku) is a Japanese national university founded in 1949. YNU provides students with a practical education utilizing the wide expertise of its faculty and facilitates engagement with the global community. YNU’s strength in the academic research of practical application sciences leads to high-impact publications and contributes to international scientific research and the global society. For more information, please see: https://www.ynu.ac.jp/english/