Airline executives breathed a sigh of relief to their investors Thursday, saying they believe the threat to their operations from the rollout of 5G technology is now behind them.

Although AT&T and Verizon have agreed only to temporarily delay 5G deployment at major airports, the CEOs of American and United both said there will now be a resolution of the dispute without thousands of delayed, diverted or canceled flights. They had been predicting those dire consequences earlier this week.

"It's taken a while to get to the right spot, but I feel like we're in the right spot," said Doug Parker, the CEO of American Airlines. "I don't think you're going to see any material disruption going forward because of this."

"While I wish it happened earlier, the good news is we now have everyone engaged, the FAA and DOT at the highest levels, the ... aircraft manufacturers, airlines and the telecoms," said Scott Kirby, the United CEO. "While we don't have a final resolution quite yet, I'm confident we'll get there."

The Federal Communications Commission auctioned off the C-band spectrum to U.S. wireless carriers last year — an $81 billion sale that would allow them to provide robust — and lucrative — 5G service. But the airlines soon started screaming that use of that technology near airports could interfere with aircraft radar altimeters, an instrument that tells pilots how high their plane is off the ground. Altimeters are crucial for landing airplanes in low-visibility conditions.

That could have meant widespread, continual and costly schedule disruptions — perhaps delaying tens of thousands of flights a year. It could have costs billions of dollars to the industry that has lost tens of billions in the last two years due to the pandemic.

Canceled or delayed flights, no matter the cause, are costly. Just two weeks of disruptions during the recent holiday travel season caused by lack of staff due to omicron cases and bad weather cost Delta $80 million. This had the potential to create schedule disruptions unlike anything seen in decades. 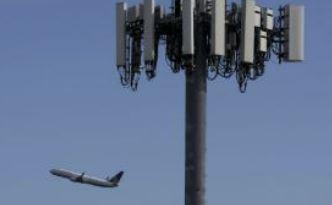 After a couple of temporary 5G service delays, the White House and the telecoms this week reached a deal to delay the rollout of the technology near airports until there can be a consensus on how to address the potential problem.

The telecom companies sounded less than pleased with the truce.

"We are frustrated by the FAA's inability to do what nearly 40 countries have done, which is to safely deploy 5G technology without disrupting aviation services, and we urge it do so in a timely manner," AT&T spokesperson Megan Ketterer.

But the airline executives voiced confidence there can be an agreement in short order that will satisfy all parties.

"The technical experts that are working on it tell us it's really not that complicated once they all are able to share information and work on it," Parker said Thursday. "So they seem encouraged that we'll be able to address this in a way that allows for full deployment of 5G, including near airports. I don't expect until we get to the point that everyone is really comfortable that you'll see anything turned on near airports, because no one wants to go through this again."

There are still some problems for regional airlines that fly smaller planes, including American Eagle, Delta Connection, and United Express. Faye Malarkey Black, president of the Regional Airline Association said her member are still waiting to see what rules will apply in cases of bad visibility for their flights.

"Manufacturers for regional aircraft have submitted those same plans to the FAA," Black told CNN. "They have not heard word back. We don't know when they'll hear word back."

But, after a number of international airlines U.S. suspended flights because of 5G concerns, most of those flights have resumed.

A new problem is the last thing airlines needed

The 5G had loomed large as the latest massive problem for an industry that has been dealing with one massive problem after another for nearly two years of the pandemic. American, United and Delta alone have reported combined losses of $36.5 billion, excluding special items since the start of 2020. Southwest, which had gone 47 years without posting an annual loss, is about to report its second straight annual loss next week.

But hope may be on the horizon for America's airlines. Despite the rise of omicron, the airlines say bookings are for this year's spring break period and they remain hopeful for a strong summer. Most are projecting a return to profitability in 2022.

Still, the timing of the omicron surge actually came at the best possible time for the airlines, despite the problems it caused during the holidays, said Philip Baggaley, chief airline credit analyst for Standard & Poor's.

"It was bad it hit during the holidays because it mucked up operations," he said. "But because it involved holiday plans that had already been made, passengers plowed ahead. The demand was there."

And January and February are historically the slowest time of the year for air travel, so the impact on bookings is limited, he said.

"The next six weeks were a lost cause anyhow," he noted.

However Baggaley said there have been previous times during the pandemic that things looked like they were on the verge of a turnaround for airlines, only to have that slip through their fingers.

"I think the expectation for an upturn in bookings in the spring and summer and a return to profitability is a reasonable base case," said Baggaley. "But a lot of other things can happen."

Among the worries for the airlines is another variant that again cuts into demand for air travel, further restrictions on international flights. They also face uncertainty about higher fuel costs, the second highest cost for airlines after wages and benefits. And they face higher labor costs as they prepare for negotiations with their unions, many of which have angry membership complaining they are at a breaking point after a most difficult two years.

So the truce in the 5G battles is a relatively rare piece of good news for an airline industry which really didn't need any more bad news.