Jianmin Qu, dean of the School of Engineering at Tufts for six years, will join Stevens Institute of Technology in September as its next provost and vice president for academic affairs.

Under his leadership, the School of Engineering set records in undergraduate and graduate enrollments. Graduate enrollment overall has increased 38%, with the most dramatic growth in graduate degree applications, which doubled over the past six years.

Annual research expenditures also grew from $20.74 million to $34.13 million during his tenure, an increase of nearly 65%.

“It has been my honor to advance the School of Engineering’s distinctive approach to education and research,” said Qu, who has served as dean and Karol Family Professor of Mechanical Engineering since 2015. He said he was drawn to the School of Engineering from his alma mater, Northwestern, by Tufts’ character, which he described as “collaborative by nature, innovative in spirit, and focused on making a difference.”

The community he found at Tufts is outstanding, he said. “Our faculty are devoted to exemplary teaching and trailblazing research, our students are high-energy problem solvers,” he said. “I have been inspired as well by how we stand together to show support for our shared mission—as we have in caring for our students during the COVID-19 pandemic and developing action plans to foster diversity, equity, and inclusion. It has been a privilege to be part of this remarkable community, and I will always be grateful for the opportunity to serve Tufts.”

Tufts President Anthony P. Monaco said Qu’s leadership, including his keen focus on collaboration among faculty, support for the student experience, and long-range strategic planning strengthened the school and the university.

“I am deeply grateful for the inspiring leadership of Dean Qu,” said Monaco. “A gifted and tireless administrator, he elevated the School of Engineering to new heights and has been a pivotal partner as the university’s interdisciplinary scholarship and research expands in exciting directions. What’s most impressive is how this progress has been guided by his open and generous mind; he has always welcomed the perspectives of faculty, students, alumni, and other members of our community. I am thankful for his dedication and pride in Tufts, and wish him the best in his new and well-deserved role as provost.”

Qu came to study engineering after earning a degree in mathematics from China’s Jilin University in 1982. He went on to earn a master’s and Ph.D. in theoretical and applied mechanics from Northwestern University, and made significant contributions to his field. A textbook he co-authored, Fundamentals of Micromechanics of Solids, was the first to provide a unified mathematical framework for the design and analysis of composite materials; it remains in wide use today.

His research in theoretical and applied mechanics has led to higher-performing materials, used in natural gas pipelines and cell phone packaging. He also has advanced what is known as nondestructive evaluation technology, employed to detect flaws in critical structures such as airplane fuselages and nuclear reactors. In 2017, he received an award for lifetime achievement from SPIE, the international society for optics and photonics.

Qu started his teaching career in 1989 at Georgia Tech, where he rose through the ranks to professor of mechanical engineering. At Northwestern, he was Walter P. Murphy Professor from 2009 to 2015, during which time he was also chair of the department of civil and environmental engineering. Under his tenure, the department’s faculty grew more than 25 percent and student enrollment increased more than 30 percent.

Qu, who also holds an executive management certificate from Northwestern’s Kellogg School of Management, arrived at Tufts with a mind to build on the School of Engineering’s strong relationship with other Tufts schools and capitalize on the university’s collaborative and interdisciplinary character. 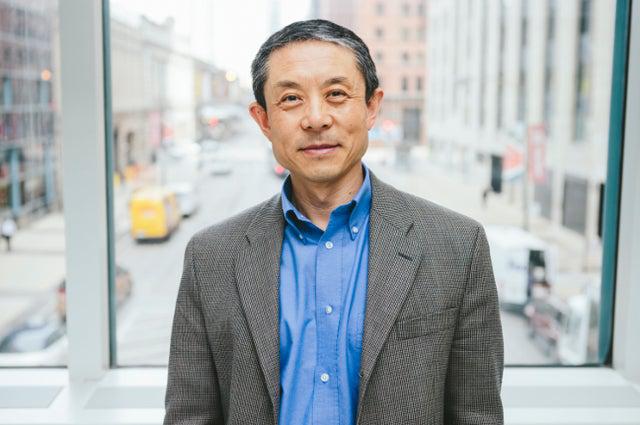 “To be a successful engineer nowadays, you need to know more than your engineering discipline,” he said on the occasion of his appointment. “If you want to make advances in engineering or science today, it has to be interdisciplinary to have impact, because most of society’s challengesare interdisciplinary.”

Qu made improvements across all areas of the school, with raising visibility and enrollment among his top priorities. At the undergraduate level, applications increased by more than 60% during his tenure as dean, and enrollment by more than 26%. This coming fall semester, the School of Engineering will welcome more than 300 new students, the largest incoming class ever, up 45% from the incoming class of fall 2015. Enrollment in the fall will be 1,116 undergraduates and 870 graduate students.

In 2018, the school achieved a major milestone when it enrolled the most gender-balanced undergraduate class in its history; that year, women undergraduates accounted for close to half of incoming engineering students. The incoming undergraduate class remains close to gender parity, with women accounting for either 49% or 50% of the incoming class for the past two years and at 49% this fall, more than double the national average of about 20%.

To broaden academic offerings and keep pace with evolving technologies and the demands of the marketplace, the school also created innovative, interdisciplinary degree programs under Qu’s leadership, in fields such as data science, human-robot interaction, materials science and engineering, and offshore wind engineering. Other new initiatives include a cooperative education program for undergraduates and the school’s first fully online graduate degrees.

At the same time, engineering faculty partnered with researchers across the university to launch new interdisciplinary centers advancing areas with far-reaching impact, such as data science, living materials, and antimicrobial resistance. Milestones included the launch of the Initiative for Neural Science, Disease & Engineering; the Tufts Interdisciplinary Advanced Materials Center; the Tufts Advanced Microscopic Imaging Center; and the Tufts Epitaxial Core Facility for characterizing semiconductor thin films. The school also leads all schools at Tufts in entrepreneurship, filing more patent and invention disclosures than any other Tufts school for the past five years in a row.

Qu joined Tufts at the start of the university’s $1.5 billion capital campaign, Brighter World, and has been instrumental in helping the school surpass fundraising goals. Donations to the school exceeded more than $26 million last year, the second highest amount in the school’s history. His leadership was pivotal to securing multi-million dollar gifts to establish the Tufts Institute for Research on Learning and Instruction and name the Derby Entrepreneurship Center at Tufts.

A signature of his tenure as dean was a deep commitment to creating a personalized learning experience for students; the new makerspace, the Nolop Fabrication, Analysis, Simulation and Testing (FAST) Facility, for instance, invigorated hands-on learning opportunities.

He also has championed investments that bridged engineering with other university schools and departments, and was especially optimistic about the innovative potential of Joyce Cummings Center, a multidisciplinary academic building set to open in early 2022. The center will house the school’s Department of Computer Science, Tufts Gordon Institute, and the Derby Entrepreneurship Center, along with other academic departments, such as mathematics.

“Giving back takes on real meaning and scope here at Tufts,” he said. “Students have a strong social conscience, and it’s been one of the greatest rewards as dean to see how they translate that passion into meaningful and fulfilling work that takes them out of the classroom and into the wider world.”

Qu has also cultivated a sense of what’s possible by expanding the Dean’s Lecture series to twice a year, providing students more opportunities to hear from prominent guest speakers about their varied paths to success.

That plan, and its title, said Qu, neatly sums up the philosophy that has driven him as dean.

“An outstanding engineer is always more than an engineer by training,” he said. “We’re called upon to offer thoughtful solutions that have deep and lasting societal benefits. We need engineers with insight, wisdom, and empathy—just the sort of engineers we have seen developing at Tufts. I have every expectation they will be leaders in whatever path they choose.”

Laura Ferguson can be reached at laura.ferguson@tufts.edu.