The S5 Active combines flagship power with military-grade durability, giving butter-fingered users and outdoor enthusiasts the best of both worlds.

Physical buttons for Home, Back and Menu

Bigger and heavier than regular GS5

Sometimes a little bit of waterproofing isn't enough. That's where the Samsung Galaxy S5 Active comes in. Not content to just resist dust and moisture, the S5 Active adds chunky bumpers and reinforced edges for military-grade toughness that laughs in the face of casual dangers, like getting smashed by a toddler or being sat on. Add in the same processor and 16-MP camera from the vanilla Galaxy S5, and you get a phone that's as capable as it is durable.

The S5 Active starts with the internals of the Galaxy S5 but enhances durability with enlarged bumpers on the corners and beefed-up sides. Samsung also replaced the capacitive touch keys found on the regular S5 with physical buttons. Subtract the fingerprint reader from the home button, fit in an extra button on the side and slap on some army-green camo print, and you have flagship phone in a rugged body. (For a more low-key appeal, the S5 Active is also available in Ruby Red and Titanium Gray.)

There is still a flap over the micro USB charging port, except this time it's not a combined with an MHL interface (for connecting an HDMI cable to a TV). The back features a 16-MP camera and flash/heart rate sensor cluster, with the lock key and volume rocker on opposite sides. The new button above the volume rocker is the Active key, which can be set to do different things such as controlling the shutter when using the camera, or calling up the Activity Zone appt.

The S5 Active features the same IP67 rating for water resistance as the regular Galaxy S5, meaning it can survive depths of up to 3.3 feet for 30 minutes. But the S5 Active goes further, with a military-standard 810G rating for resistance against fungus, acidic atmosphere, ballistic shock and more.

The takeaway is that the S5 Active is a glutton for punishment.

We repeatedly dropped the phone onto a hardwood floor from a height of 4 feet, and while the back plate and battery popped off during this testing, the device sprang back to life when we replaced the parts. The S5 Active can even take pictures while underwater. That's because while it touchscreen become useless when submerged, like all other smartphones, the physical Active key still works like a charm.

The Galaxy S5 Active features the 5.1-inch, 1920 x 1080 Super AMOLED display from the regular Galaxy S5. The screen offers the same deeps blacks, rich vibrant colors and wide viewing angles of its less-rugged sibling, marred only by a slight blueish tinge common on AMOLED displays. When I watched the trailer for the new TV series Constantine, I loved the icy blue stare of a menacing demon and the scorching oranges of John Constantine's pyromancy as he struggled to battle the forces of darkness.

In terms of brightness, the S5 Active delivered 364 nits, similar to the regular S5 (373 nits) and the HTC One M8 (368 nits), but less than the super-bright iPhone 6 Plus (537 nits). The S5 Active can also produce a wide array of colors, with its screen recreating 154.9 percent of the sRGB color gamut. This is more than both the HTC One M8 (115 percent) and the iPhone 6 Plus (95.3 percent), but anything above 100 percent isn't necessarily better.

The S5 Active performed well in terms of color accuracy, scoring a Delta-E of 2.2 (closer to zero is best). This is better than the HTC One M8's Delta-E of 4.1, and only slightly behind the iPhone 6 Plus' 1.9 rating. 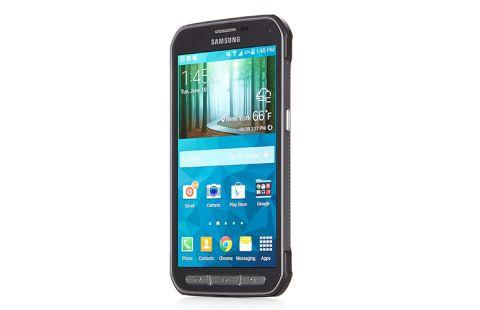 Another perk of the S5 Active is louder audio compared to the vanilla Galaxy S5. When measured from 13 inches away, the S5 Active produced 78 decibels of sound, significantly louder than the S5's 73 dB, but lower than the HTC One M8's 83 dB. This gives the S5 Active's speakers more impact than those of its nonrugged sibling.

When I listened to Taylor Swift's "Shake It Off," the horns and bass sounded clearer and more distinct on the S5 Active. The one downside is that audio can sound strained at max volume.

The S5 Active packs a Qualcomm Snapdragon 801 processor with a 2.5-GHz CPU, 2GB of RAM and 16 GB of flash memory. You can expand the storage by up to 128 GB via the microSD slot hidden behind the removable back plate.

The S5 Active dealt swiftly with everyday tasks such as listening to music on Spotify while tackling foes in my favorite puzzle game Terra Battle. It also tackled graphically intense first-person shooters such as N.O.V.A. 3 with aplomb, the phone stuttering only slightly when I took on a large number of enemies. Loading NOVA 3 took just 15 seconds, slightly faster than HTC One M8 (17 seconds) and even the vanilla Galaxy S5 (19 seconds).

Samsung equips the S5 Active with a 2.1-MP camera on front and a 16-MP camera in the back. The front camera does a good job of capturing details and light, although there is some noticeable distortion that causes pictures to look stretched.

The rear camera packs all of the features available on the regular S5, such as selective focus and Real Time HDR. The 16-MP camera excels outdoors and in bright-light situations where it can make use of its HDR functions. Pictures taken using the Real-Time HDR are better able to capture details in the shadows and highlights, often seen best in skies where clouds would normally blend into the background.

In low-light situations, the S5 Active is still strong, but starts to fall behind the iPhone 6 Plus in terms of detail. Compared to the iPhone, pictures I took with the S5 Active looked a little grainier and slightly darker.

The rear camera also shoots solid 1080p video. Our footage of New York City traffic captured good sharpness in the cars as they drove by and crisp audio of the busy street.

Like most recent smartphone cameras, the S5 Active is loaded to the brim with various modes like beauty face and dual camera, with even more available for download. You can also adjust settings such as burst shooting, white balance and face detection from the gear icon in the top left of the camera screen.

Samsung loads the S5 Active with Android 4.4.4, which has been further customized by Samsung's TouchWiz skin. This adds a flat, icon-laden UI and some useful features such as Multi Window mode for true side-by-side multitasking, along with a home screen cluttered with widgets. Swiping all the way left brings you to the My Magazine screen, which you can use to aggregate news and social media stories from all over the Internet.

Swiping down from the top summons the notification tray with icons for Wi-Fi, location services, mute, screen rotation and Bluetooth, with more choices available from the quick settings menu in the top right. The real settings menu is also overflowing with colorful circular icons, and it's here you can customize the function of the programmable Active key.

Love it or hate it, this is the best TouchWiz implementation yet. Multi Window lets you easily run two different apps side by side, and the SwiftKey-powered keyboard adds swipe-based input and an extra number row. The drawbacks are slightly laggy response time and constant, annoying water-drop sounds, which can be improved by turning off S Voice and disabling sound effects in the settings. I just wish the S5 Active had been set up that way from the start.

The S5 Active comes with an incredible number of apps preloaded, some welcome and some not. There are useful apps like Mobile Hotspot for turning your phone into a personal Wi-Fi router, and Polaris Office 5 for on-the-go productivity. But I could live without apps such as AT&T Navigator (which costs an additional $9.99 a month), Soft Card mobile wallet and the YP Yellow Pages app.

Samsung also bundles its suite of apps, including Activity Zone, S Health and Smart Remote. Activity Zone provides a quick shortcut to flashlight and stopwatch functions, with additional measurements for compass and barometer. S Health works with the built-in pedometer and heart rate sensor to give you a quick and easy place to track fitness metrics and set things like a daily step-count goal.

While the S5 Active is larger and heavier than the original Galaxy S5, what it lacks in lightness it more than makes up for with military-spec durability. The only Android phone tougher than the S5 Active is the 4.5-inch Kyocera Brigadier and its Sapphire Shield screen. But fitted with last-gen components, the Brigadier's Snapdragon 400 is lapped by the S5 Active's Snapdragon 801 chip. With the S5 Active's speedy processor, enduring battery and even louder speakers, you get the equivalent of Mustang performance in a Humvee body. Now all you have to do is prepare for life without the limits of conventional smartphone worries, and figure out what to do with the extra money you would have spent on a case.

Sam is a senior reporter at Gizmodo, formerly Tom's Guide and Laptop Mag. Was an archery instructor and a penguin trainer before that.