Home » Technology » Samsung 2022 TV line-up: everything you need to know

When it comes to the cyclical nature of TV launches, convention dictates that following a year of big releases and hardware revolutions comes a fallow year where improvements are more incremental and focused on updated software features.

In 2021 Samsung made huge strides forward, with highlights that included expansively sized and exorbitantly priced consumer MicroLED models, Neo QLEDs with astonishingly small Mini LEDs that narrowed the gap to OLED, and a new version of the ingenious One Connect box attachable to the TV’s pedestal stand.

At first glance, 2022 would appear to be a tad less monumental. Once again, there are MicroLEDs and Neo QLEDs as well as upgrades to the brand’s Lifestyle TVs, a new NFT platform and AV enhancement technologies courtesy of an upgraded Neo Quantum Processor.

But there's more: while Samsung's own official announcements haven't yet acknowledged them, we now know for sure (thanks to the CES Innovation Awards) that TVs featuring cutting-edge QD-OLED technology are on the way from the company.

With so many products and technologies to get to grips with, we’ve rounded up the key developments across the entire range as well as all the available information (both official and unofficial) for the specific 2022 Samsung TV models that we know about, in order to help you decide which might be suitable for you.

Expect further announcements from Samsung in the coming weeks with model numbers and exact specifications, but until then, enjoy everything we know so far about Samsung's 2022 TV line-up...

The latest version of Samsung’s Neo Quantum processor brings a boost of audio and visual enhancement technologies across the range. Certain 4K and 8K Neo QLED models will gain a refresh rate upgrade from 120Hz to 144Hz, and a backlight brightness gradation bump from 12-bit to 14-bit. There's a new Shape Adaptive Light Control feature that will further enhance brightness accuracy, too, and Object Depth Enhancer software will be introduced to improve depth perception.

Sonically, Samsung continues with its Object Tracking Sound technology, adding a new version called Object Tracking Pro, which builds upon previous versions of OTS by adding up-firing speakers that help the TV's audio better move in tandem with the image on the screen.

Samsung’s 2022 TVs continue to use the company's Tizen OS smart platform, but there'll be an all-new Smart Hub at the centre of it all to help collate and suggest content based on your viewing preferences, while the Hub’s sidebar gives easy access to the three main usage categories – Media, Gaming Hub and Ambient.

When watching movies and TV shows there's a new 'Watch Together' app to let users video chat while enjoying sync'd playback. Meanwhile, the Gaming Hub, as its name suggests, intends to makes it as straightforward as possible for users to switch between console and cloud gaming services – the latter provided via Nvidia GeForce Now, Google Stadia and Utomik (more on this below).

Samsung is keen to encourage its users to discover and use their TV's ambient settings, particularly for displaying pictures. The company already has an art store with over 1600 pieces, but new for 2022 will be integrated an NFT platform for discovering, purchasing and trading digital artwork through its Micro LED, Neo QLED and The Frame models.

All 2022 Samsung TVs will feature a redesigned home screen with a new 'Gaming Hub' that will give users curated game recommendations and easy access to services including (on select models) Google Stadia, Nvidia GeForce Now and Utomik. It's not yet known what resolution Nvidia and Utomik will be offered in but Google has confirmed that it will stream in 4K for Pro subscribers via the Samsung Gaming Hub.

As well as cloud gaming the new Gaming Hub will also host all HDMI connected consoles and include passthrough controller inputs for interchangeable play, with both PlayStation and Xbox controllers supported at launch.

PC users will also be pleased to know certain models of its 2022 TV lineup will get a boost in refresh rate from 120Hz to 144Hz as well as support for AMD FreeSync Premium Pro. To which models this will apply isn't yet confirmed but gamers should rest assured that Samsung has promised that all new higher-end TVs will only sport HDMI 2.1 ports capable of supporting 4K@120Hz signals.

Despite Samsung revealing at the end of last year that it was developing its own cloud gaming platform to allow users to stream games on Tizen-based smart TVs without a console, there's still no indication yet when it will materialise.There was also no mention at CES 2022 of Samsung's HDR10+ alternative to Dolby Vision gaming. The extension is said to support VRR (Variable Refresh Rate) up to 120Hz, HDR auto-calibration and low latency tone-mapping. Samsung says the addition of these three features to HDR10+ will make for "perfect gameplay", but where HDR10+ games will actually come from and when is still unknown.

For those not yet familiar, MicroLED is a next-gen TV technology that essentially takes the best qualities of OLED and removes more or less all of its shortcomings. Like OLED, each pixel is self-emissive, so one can be completely black while those next to it can be bright white or a vibrant colour, creating incredible contrast. 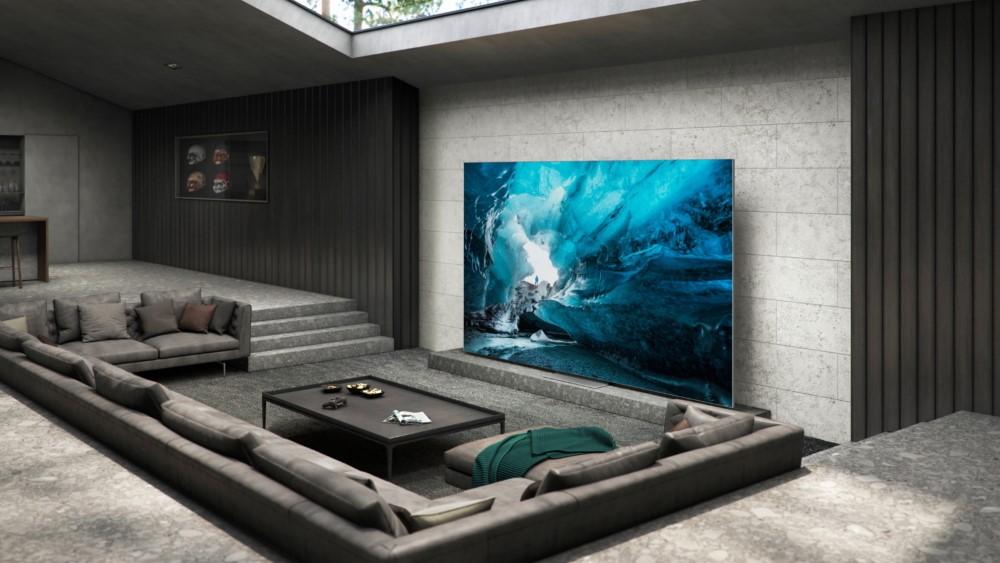 MicroLEDs can go much brighter than OLEDs, theoretically resulting in even more spectacular contrast. What's more, unlike OLED TVs, which use organic materials ('OLED' stands for 'Organic Light Emitting Diode'), MicroLEDs are inorganic, so they don't degrade and can't suffer from image retention or burn-in.

Last year Samsung announced its first consumer MicroLEDs with the 110-inch MNA110MS1 and 99-inch MNA99MS1 4K models, each costing six figures and requiring professional installation. Despite also promising a more manageable 76-inch model, the company is instead introducing an 89-inch screen for 2022.

The three mammoth models all have a 99.99% screen-to-body ratio with a new bevel-free design. Samsung says the technology offers 'best-in-class' picture quality, with up to 25 million micrometer-sized LEDs individually producing light and boasting a 10 per cent wider colour range for heightened clarity and contrast levels. The 2022 MicroLEDs will also support 20-bit greyscale depth, which Samsung claims will yield over 1 million increments of brightness and colour levels to improve delivery of HDR.

All three Micro LED models will also feature in-built Dolby Atmos sound with top, side and bottom speakers. And there's ‘Multi-View’, which lets users view content in a split-screen arrangement from any or all of the four HDMI ports in 4K@120Hz.

When you've paid that much for a screen you'll want to make the most of it even when you're not watching. Handily, Samsung's Art Mode is on-board these top tier TVs with the two exclusive ‘media pieces’ courtesy of designer Refik Anadol included. And, if you're looking to invest, Samsung also a new integrated NFT platform for buying and selling digital artwork.

There’s no pricing info for the 2022 MicroLEDs yet, but it’s a safe bet that they’ll be more expensive than any other TVs in Samsungs line-up. Or indeed any other manufacturer's.

Although not yet officially announced, thanks to the CES Innovation Awards we know that Samsung's 'QD Display' TVs are on the way.

We also know that they will feature Samsung’s Infinity One Design and immersive Object Tracking Sound technology. Sporting a 2022 Neo Quantum Processor, it will also boast a 144Hz refresh rate and four HDMI 2.1 inputs.

There’s not much else to go on just yet, even the name is still very much TBC. In the awards blurb, CES recognised a ‘65-inch QD-Display’ from Samsung as the world’s first true RGB self-emitting Quantum Dot OLED display, saying that it "revolutionises TV by combining the contrast levels of RGB OLED with the colour and brightness of quantum dots for ultimate visuals".

Previous reports have indicated that QD-OLEDs will initially launch in 55-inch and 65-inch sizes, with larger 70-inch models appearing later. Price-wise, insiders have suggested that the QD-OLED TVs will sit between Samsung’s six-figure super-premium MicroLED TVs and its flagship QLED lines.

Samsung’s Neo QLED TVs were launched last year amidst a fair amount of hype, with claims that by shrinking its LEDs and cramming more of them into the backlight layer the contrast of these models would be comparable to that of OLEDs. After the success of the 2021 Neo QLEDs, which won a number of five-star reviews from us here at What Hi-Fi?, Samsung is not only sticking with the technology, but pushing it even further.The 2022 version of Samsung’s Neo Quantum Processor will enhance the brand’s range of Neo QLED TV’s with a range of new technologies, including the introduction of advanced contrast mapping with ‘BLU’ (backlight unit). Samsung says that this innovation will increase brightness and allow a jump from 12-bit gradation to 14-bit, resulting in greater control of each Mini LED. Ultimately, Samsung says the TV will be able to regulate its brightness across 16,384 zones instead of the 4096 in 2021.

The software also offers ‘Shape Adaptive Light’ technology, which Samsung says will analyse lines, shapes and surfaces to control the light emitted from the Quantum Mini LEDs for enhanced brightness and accuracy. And there's a new feature called ‘Real Depth Enhancer', an algorithm that distinguishes objects against a background, processing them differently for a greater sense of depth.

Alongside upgrades in visuals, the 2022 Neo QLEDs get a sonic boost with Object Tracking Pro, which builds upon last year’s OTS (Object Tracking Sound) by incorporating up-firing speakers that help the TV's audio better move in tandem with the image on the screen. The addition of top channel speakers also means that the new Neo QLEDs will also deliver on-board Dolby Atmos sound.

Samsung’s ‘lifestyle’ TVs – The Frame, The Serif and The Sero – have stylish designs and customisable bezels intended to make them blend effortlessly into your tastefully decorated interior while also being the perfect platform to display your carefully curated digital art or personal photos. For 2022, all Lifestyle TVs will receive a new Matte Display with anti-glare, anti-reflection and anti-fingerprint protection.

The Frame LS03B will be offered in a total of seven different sizes, starting at 32-inches at the small end and topping out with an 85-inch model featuring a 4K matt LCD panel, quantum dot colour and 4K 120Hz capability. Meanwhile, The Serif gains a new larger size for 2022, making it available from 43-inches up to 65-inches.

The Sero, configurable in both horizontal and vertical aspects, acquires a new ‘MultiView’ function allowing users to simultaneously view different content on the top and bottom of the screen.

And if you’re a fan of the vertical aspect ratio, you’ll be pleased to know that The Frame and Neo QLED 4K/8K models (up to 65-inch) are now compatible with the company’s Auto-Rotating Wall Mount, which changes orientation at the touch of a button. These models also gain support for a vertical operating interface, including the Smart Hub, offering apps such as YouTube and TikTok as well as mirroring and casting in the rotated mode.

QD-OLED TV: everything you need to know about the game-changing new TV tech

LG 2022 TV lineup: everything you need to know