Executive Mosaic is honored to present a 2022 Wash100 Award to Michael LaRouche, president of national security and space sector at Science Applications International Corp., for his leadership in providing a wide range of services in support of customers in defense, space and intelligence sectors.

The announcement marks the second consecutive time that LaRouche was inducted into the Wash100. The first was awarded in recognition of his efforts to oversee the newly created NSS as the SAIC segment works to deliver services to national security and space customers.

Don’t forget to cast your TEN votes for LaRouche and your other favorite executives in the government contracting sector on Wash100.com, where you can also learn more about the history of the award and its latest class of winners.

Under LaRouche’s leadership, the business has secured several contracts with Department of Defense components and other clients in the government. He also saw to the appointment of a senior vice president within NSS and the launch of a mobile application security and software scanning offering.

In May, SAIC won a potential $200 million indefinite-delivery/indefinite-quantity contract for delivery of laboratory operations and support services to the Defense Intelligence Agency. LaRouche cited the company’s over three decades of experience in providing DIA with support and transformative platforms and reiterated its commitment to continue doing so. 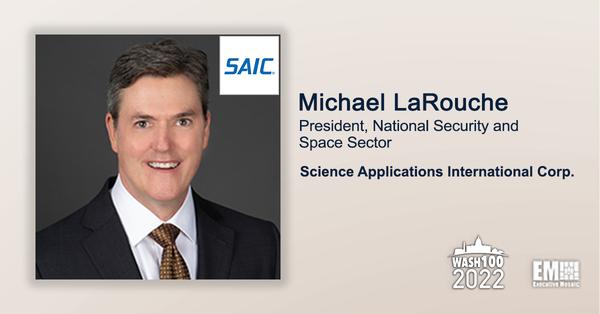 SAIC reported that it booked approximately $664 million in space and intelligence contracts during the second quarter of fiscal year 2022. The deals with undisclosed customers in the space sector and the intelligence community provide for artificial intelligence, cloud, cybersecurity, digital engineering, information technology modernization, mission operations and technology integration services. Commenting on the August report, LaRouche said the awards underscore customers’ confidence in SAIC.

In November, SAIC booked contracts valued at $348 million in total to deliver digital engineering, information technology and other support services to space and intelligence sector customers. “These wins transform our portfolio, align to our growth strategy, and most importantly, allow SAIC to deliver bold outcomes to achieve our clients’ objectives faster,” said LaRouche.

Aside from contract awards, SAIC announced the appointment of David Ray as senior vice president for its space organization. He joined the company after leading the government and defense business of FLIR Systems. Commenting on Ray’s move to SAIC in March, LaRouche said the new SVP’s extensive market experience will help the company support its customers while expanding its footprint.

SAIC also launched its Rugged Apps offering in December. It was developed to strengthen the security of mobile applications, provide defense against cyber attacks and comply with National Information Assurance Partnership requirements for agencies.

The executive joined SAIC in 2019, bringing experience in leading advancements in satellite systems, military command and control, ISR, communications, digital transformation, cyber, automation and special mission applications. He spent over a decade at the former Raytheon company and worked at Lockheed Martin and Hughes earlier in his career.

LaRouche assumed his current post as SAIC NSS president in October 2020, when the company reorganized its business structure into two segments in an effort to advance business strategy and growth priorities.

Executive Mosaic congratulates Michael LaRouche and SAIC’s NSS team for their selection to receive the 2022 Wash100 Award. LaRouche’s strong leadership and push for innovation have cemented his footprint in the GovCon sector and driven modernization across the federal government.