As India’s central government struggles to decide on gambling laws in the country, recent research by media companies shows that this is one of the largest unregulated gambling markets in the world, with interesting stats regarding which states and groups are playing the most.

Sportsbooks continue to be popular amongst all ages and financial positions. International casinos are making the most money off of Indian gamblers, as locals find them more reliable. There are a variety of factors that influence these stats and numbers discussed below in depth.

Telangana and Andhra Pradesh outright banned online gambling in the last several years while Sikkim, Goa, Daman, and Nagaland allowed it. This summer, the federal government formed a tax commission that would examine the benefits of legalizing and taxing online casinos but has not come to any straight conclusion just yet. At the end of August, a Madras High Court struck down a Tamil Nadu law that banned gaming, citing the law as excessive and unconstitutional. The indecisions by the central government and states leave companies and gamblers to take advantage of loopholes in the law.

The most significant loophole would be that India’s only gambling law was written before 1900 and fails to mention online gambling explicitly. The Information Technology Act of 2000 regulates many online activities but once again fails to address online gambling, which has left an open path for offshore casinos and sportsbook companies.

India is in the top five countries regarding growth and income potential related to online gambling, which means that millions are participating in this activity every day. 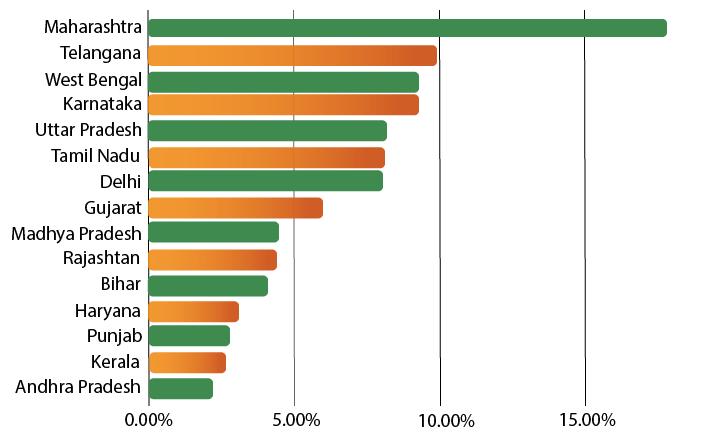 Insights show that the Indian online casino market will likely continue to grow by 22 per cent each year, higher than the worldwide average of 16 per cent. Most gamblers come from just six cities across India. Most gamblers come from Maharashtra, where in December 2021 more than 19 per cent of the population indulged in online gambling daily. The data shows that visitors to gambling sites are mostly from Maharashtra, Karnataka, Telangana, Delhi, Tamil Nadu, Uttar Pradesh, Gujarat, West Benga, Madhya Pradesh, Rajasthan, Andhra Pradesh, Haryana, Bihar, Odisha and Kerala.

The high rate of online gambling in these states also relates to the population, which is higher in most mentioned states. Maharashtra, Delhi, Gujarat, Tamil Nadu, and Karnataka are India’s most highly-populated states. Many of those states are now dealing with a population that has increased access to cell phones and the internet and chose online gambling as a hobby.

Income in States That Gamble

It is conceivable that to gamble, individuals must have enough disposable income to gamble with. Plus, most casinos, even offshore ones, usually have an income confirmation process to make sure individuals have the means to gamble. At the same time, according to ENV Media, India’s middle class is reaching a population of 300-350 million throughout the country.

On the one hand, some states with the highest gambling rates also house the “poorest” cities, or ones with more families living below the poverty time, like Mumbai in Maharashtra, certain places in Karnataka, and Telangana. However, the report does have promising news, that it is still primarily middle-class or those individuals with some disposable income that show the most interest in online gaming in general, including online casino sites. Urbanization rates are growing exponentially in states where online gambling is a common hobby.

Technology is the Leading Influence for Gambling

India has a young population, with 1.01 billion people below the age of 45 - setting the stage for any online or mobile gaming. Combine that with India’s own heritage when it comes to gambling games, like rummy, Teen Patti, and horse racing, and offshore casino companies have the exact audience they need to continue to profit.

There are over 800 million internet users in India, and the number is growing by over 100 million new users per year. Even rural areas are catching up, with an 18 per cent yearly increase in new customers. India is considered second only to China when it comes to growing technologies like internet access. Some things should be considered with these numbers, like the fact that both rural and urban women are still struggling to get the same access to the internet as men, and there are fewer women internet users. This does change the scope of advertising and the type of customers participating in online gaming, gambling, and other tech-related activities.

Generally, men under 50 are the primary users of online sportsbooks and casinos. Still, urban women with disposable incomes are also participating in online poker tournaments, slots games, and even cricket betting. This may directly relate to the rate of media exposure in cities with more opportunities for both men and women. The Ministry of Health and Family Welfare found that Kerala, Punjab, Tamil Nadu, Goa, and Andhra Pradesh were the top five states with the most media exposure. This includes everything from news to commercials on television, the internet, billboards, magazines, and more. As casinos are allowed to advertise just about anywhere and frequently do, this can also be considered a factor for influencing specific populations to risk gambling online.

Without regulation, India becomes a unique market to study, as gamblers and international casino companies use the federal government’s indecision to their benefit. As access to technology, better jobs, and urbanization occurs, you can expect the gambling industry to explode in India with more new users than ever before due to a lack of regulation.