OAKLAND (BCN) – Better Bay Area air quality and greater safety are the aims of a new voluntary queuing system for container vessels calling on the Port of Oakland, according to three shipping groups.

Following its success in Southern California, the new system is being expanded to the Bay Area. Ships will wait 50 miles off the coast in a safety and air quality zone until their scheduled arrival time at the Port.

The new system became effective Monday. Ships will get an arrival time based on when they left their last port of call. Before Monday, ships were given an arrival time when they were fewer than 80 nautical miles from the coast.

The new system will allow ships to take their time getting to Oakland, reducing emissions while at sea. It will also allow more space between vessels at sea, making shipping safer especially in the winter when storms are brewing. 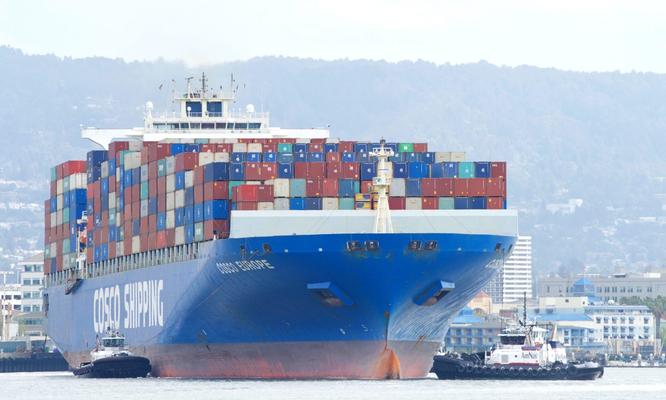 “The resounding success of the new container vessel queuing system in Southern California has set the stage for this expansion to the Bay Area,” said Jim McKenna, president and CEO of the Pacific Maritime Association, which represents maritime companies that do business on the West Coast, in a statement.

“This updated system has reduced the number of vessels at anchor near our ports, enabling safer operation for vessels and their crews as well as additional protections for coastal communities,” McKenna added.

Maritime shippers implemented the new system at the ports of Los Angeles and Long Beach, which reduced the backlog of ships waiting for a berth at those ports. The number of vessels waiting fell to 17 in early January from 86 in mid-November.

Nine vessels were waiting off the Bay Area coast on Friday, but that number was expected to increase, Oakland port officials said. The new system is not meant to reduce the number of ships calling on the Port of Oakland.

“We look forward to our region reaping the safety and clean-air benefits as a result,” Korwatch said.

© Copyright 2022 CBS Broadcasting Inc. and Bay City News Service. All Rights Reserved. This material may not be published, broadcast, rewritten or redistributed.