THOUSANDS of people were left baffled when a string of unearthly lights came flying over the city of Phoenix in one of the strangest UFO encounters of all time.

More than twenty years on from the mysterious "Phoenix Lights" event - the incident is being chronicled as part of a new series by Star Wars and Star Trek filmmaker JJ Abrams' production company, simply called "UFO".

The Phoenix lights are seen cruising over Arizona

Mock-up based on testimony from witness Tim Ley

service - comes after a bombshell Pentagon UFO report, which saw the US admit there is something out there it cannot explain.

And perhaps one of the most extraordinary aerial anomalies is the Phoenix Lights event, which despite being shrugged off by the US military continues to spark questions.

Phoenix, Arizona, was the epicentre for the event - but the UFOs were observed over Nevada and across the border in Mexico over the course of three hours and a space of 300 miles.

The objects are reported to have been seen by multiple witnesses across Arizona over the space of around 106 minutes.

There were two distinct parts to the event - firstly a number of people reported seeing a triangular formation of lights, possibly attached to a "V-shaped" object" flying overhead on March 13, 1997.

Arizona witness Tim Ley provided details for a mock up which shows it like a flying arrowhead with the lights dotted across its belly.

Others described the "craft" as silent, slow and massive - up to 6,000ft across, the size of 17 football pitches.

"It was astonishing and a little frightening. It was so big and so strange", Ley said at the time.

"All you could see was the outline as though something was blotting out the stars."

And the next stage of the event was a string of up to nine lights which appeared in the sky, with video shot of them showing the twinkling lights of Phoenix below.

The lights shimmered above the city for around ten minutes in a formation like a V shape, before then vanishing as quietly as they had appeared.

Hundreds - if not thousands - of people witnessed the second part of the event and it made international news, hailed as the most extraordinary UFO encounter since Roswell.

Air traffic control reported they could see the lights, but could not detect anything on their radar screens - with the controller on duty describing the experience as "weird" and "inexplicable".

But then days later the US Air Force later claimed the lights were flares dropped by A-10 'Warthogs' planes during a training exercise.

Not for UFOlogists and the witnesses who were left profoundly disturbed by the encounter.

Speaking in an on-camera interview for Abrams' new show, then-Arizona Governor Fife Symington III opens up about what he saw.

It came after he initially dismissed the case at the time, and even mocked it by getting an aide to dress up in an alien costume in a press conference.

"I turned around and this great big delta-shaped thing came out of the northwest and headed down towards the southwest valley," he said.

"It was really eerie. It had embedded lights. I always refer to it as otherworldly. I’d never seen anything like it."

Symington first went public with his admission that he had seen the Phoenix Light ten years ago.

And he has rubbished the US Air Force's explanation, himself serving as an airman during the Vietnam War and winning the Bronze Star.

He said: "As a pilot and a former Air Force Officer, I can definitively say that this craft did not resemble any man-made object I'd ever seen.

"And it was certainly not high-altitude flares because flares don't fly in formation."

Symington however played his own role in the apparent "cover up" - with the UFO doc stating he refused to further investigate the incident at the time.

The Phoenix Lights is uncommon among UFO sightings - most of which rely on a snippet of grainy footage and one or two witness - as scores of people have come forward to tell their stories.

Some described the lights as not looking like bulbs, but rather distorted balls of gas with light that "didn't spill out or shine".

Hollywood actor Kurt Russell even claims to have witnessed the incident while flying his plane along with his son Oliver. 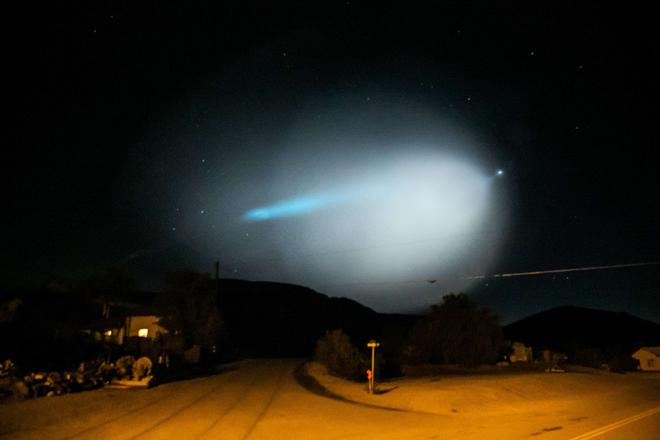 "I was flying [my son] to go see his girlfriend, and we’re on approach, and I saw six lights over the airport — absolutely uniform — in a V-shape," he said.

The Escape from New York star revealed while appearing on the BBC's The One Show that he reported it to air traffic control, suggesting he may have been the first pilot to call in the phenomena.

Truck driver Bill Greiner said he would "never be the same" after the incident, adding "I may be just a dumb truck driver, but I've seen something that don't belong here."

He claimed he saw three F-16 fighter planes take off from Luke Air Force Base which flew towards one of the lights, only for it to then shoot off into the sky at high speed.

US Air Force officials angrily denied there was anything to see, but did acknowledge there were warplanes airborne from the base on a "routine training mission".

"It was crazy. I know those pilots saw it. Hell I'll take a lie detector on national TV," Greiner said at the time.

"I wish the government would just admit it. You know what its like in this city right now? Its like having 50,000 people in a stadium watch a football game and then having someone tell us we weren't there."

Printer tech Dana Valentine meanwhile was sitting in his yard when he saw the lights flying directly above them around 500 feet up.

"It was more like a gray distortion of the night sky, wavy. I don't know exactly what it was, but I know its not technology the public has heard of before," Valentine said.

Theories continue to rage that the object, or objects, were extraterrestrial or perhaps some kind of secret government tech.

And despite the US military's official stories, those involved remain angry as they demand answers.

It comes as some US lawmakers are now calling for hearings on the UFO issue, which is being characterised as a national security threat and has stepped from fringe conspiracy theories to a genuine and serious debate.

And the Pentagon are believed to be setting up a dedicated UFO office.

US lawmakers commissioned the UFO report after a stunning string of leaked videos which showed military encounters with objects such as the infamous "Tic Tac".

It marked an incredible turnaround after the government dismissed UFOs at the conclusion of Project Blue Book in the 1960s.

Most read in News

Priest 'beaten to death by refugee jailed for torching Cathedral'

The report admits the encounters could be previously unknown aircraft from China, Russia or event a "non government" terror group.

But it crucially did not rule out an extraterrestrial, or perhaps even extradimensional, origin for the encounters.

And meanwhile it is also believed the US has a 23-minute video showing several UFOs moving in strange patterns that will leave viewers "rattled", according to former insider Lue Elizondo.