made weird phones. Remember when it put all the buttons on the

that let you attach different add-ons to the phone, like a camera grip. And it's hard to forget last year's G8, which let you turn up the volume by contorting your hand into a clawlike gesture and hovering it over the selfie camera. LG's storied, gimmicky past, at least when it comes to phones, has always made the brand quirky and endearing.

But endearing doesn't sell phones. LG's market share has been on a steady decline for several years, forcing the company to now

end up with a profitable mobile division. The answer? The LG Velvet, which ditches the G series' gimmicks in favor of simple, sleek looks. However, in LG's quest to quell the quirkiness and create a more mainstream phone, the Velvet is

bland. Outside of its suave and smooth design, you'll be hard-pressed to find anything noteworthy.

A Fresh Coat of Paint

The Velvet doesn't look like any other LG phone before. The rear is simple, with cameras that look like water droplets rising up from a surface.

The colors are what give this a visual edge, though— 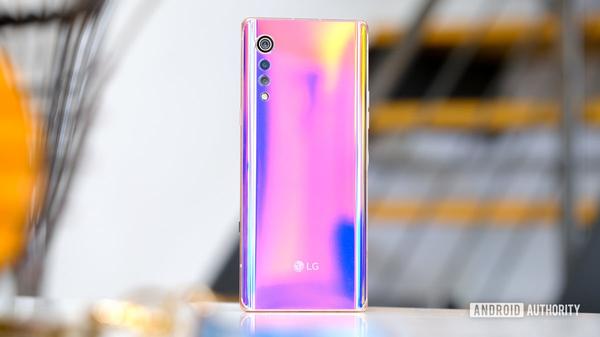 is particularly beautiful. Unfortunately, that model is available only in other parts of the world. Your color options are limited to where you buy the phone, and there's no unlocked version in the US. I like the red from Verizon as well as the "pink white" that's available from T-Mobile. The gray and the metallic chromelike color (my unit) from AT&T are less spectacular.

When you pick up this phone for the first time, it becomes even more clear that this is not something from the old LG. The back and front of the Velvet curve into each other, making the edge ultra-thin but not so much that it feels sharp or unpleasant. This design choice, coupled with the very narrow but long screen, makes it easy to hold. It's still quite a big phone, but I didn't have trouble reaching all parts of the screen, as I did with the

It's not as slippery as the

for this all-glass sandwich. Instead, I've encountered a different issue: The screen randomly activates in my pocket, even sending a few unintelligible messages to a friend. (To avoid this, you need to make sure the screen faces outward when you stow it.)

That's about it as far as visual differences go over the

. You still get a tiny, centered notch on the display for the selfie camera, as well as other niceties like IP68 water resistance, NFC for contactless payments, wireless charging, and a MicroSD card slot if you need more than the included 128 gigabytes of storage.

I'm glad the headphone jack is still here, but the Quad DAC digital-to-analog converter is gone. On older LG phones, the Quad DAC allows you to play high-quality music through plug-in headphones, a feature long-appreciated by audiophiles like WIRED's own Parker Hall. (He says "Boo," LG.) It's one of those features that sets LG phones apart from the field, but

having a headphone jack

itself is enough of a rarity these days.

Middle of the Road

The problem with the Velvet is that, while it has all the fundamentals of a good phone, it doesn't excel at anything enough to stand out—which any phone in the $600-$700 range really should.

The 4,300-mAh battery cell sits at the top as one of my favorite features. It easily lasts a full day and then some with average use, but don't expect

like some other phones. This is the battery capacity for the AT&T model, but the Verizon and T-Mobile versions come with a slightly smaller 4,000-mAh capacity. I haven't tested those models, but they should still last a full day.