If you’re building a high-end home cinema, the SDR-35 should be the first AVR you audition

Thrilling mix of subtlety and scale

Only seven channels of power

When hunting for an

or amplifier, it can be hard not to get caught up in the battle of the specs. As the component to which all others are connected, it’s essentially the brains and beating heart of a system (not to mention often the most expensive single element), so it’s understandable that a certain amount of spec obsession creeps in. Even features that you don’t need now could become important in the future and you will want to cover as many bases as possible.

Those who become too focused on comparing spec sheets may well overlook the JBL Synthesis SDR-35. While its format support is thorough, its amplification for just seven channels and (current) lack of

connections are trumped by Denon receivers costing around a sixth of its huge price tag.

Of course, what a spec sheet can never tell you is how a product sounds, and in this regard, the JBL Synthesis SDR-35 is a clear cut above any other AV amplifier we’ve tested over the past few years.

The JBL Synthesis SDR-35 is based on the Arcam AVR30, albeit with a number of upgrades. The biggest one of these in terms of sound quality is said to be the move from the ESS Sabre 9026 Pro DAC to the 9028 Pro. This is claimed to result in lower distortion and better detail and dynamics.

The JBL and Arcam both use Dirac Live Room Correction (a more involved and advanced take on the mic-driven calibration of most modern AVRs), but only the JBL comes bundled with Dirac’s Bass Control feature, which uses machine learning and AI to more accurately and cohesively balance bass delivery around the listening space – something that should be particularly useful if your system includes multiple subwoofers. Anyone buying the Arcam AVR30 will have to fork out an additional £252 to add this feature.

The SDR-35 also features Logic 16 processing, which is designed to create a more convincing 3D soundscape. All signals, even those in mono, can be up-mixed to 15.1 using Logic 16.

Last on the list of upgrades over the AVR30 is the inclusion of Dante, which allows for the lossless transmission of hi-res AV signals over standard ethernet cables. If you’re having a system installed throughout your house, you (or your custom installer) could be grateful for this. It should bring the cost of cabling down, too.

The JBL Synthesis SDR-35 shares lots of specs with its Arcam cousin, including its Class G amplification, which consists of two power supplies – one highly efficient power supply that handles low-volume effects, and another with more power that takes over when higher volumes are required.

The arrangement is designed to ensure plenty of power is available as required while ensuring that no more power is used than is necessary. The crossover between the two power supplies is intended to be inaudible.

Power is rated at 100W into 8 ohms when all seven channels are driven, and that is really the maximum the SDR-35 can drive when used solo. Though it can decode and process up to 15.1 channels in a maximum 9.1.6 configuration, taking advantage of this requires the use of extra amplification.

The seven-channel JBL Synthesis SDA-7120 power amplifier is the obvious choice here. Used on its own, it’s best to think of the SDR-35 as a 5.1 amplifier with two extra channels that can be used to add rears, heights or a stereo second zone.

There’s a substantial selection of physical connections on the SDR-35’s rear including six analogue RCAs, four coaxials and three opticals (there’s also a 3.5mm aux-in on the front panel). The HDMI section consists of seven ins and three outs, with one of the outs supporting

This is the only nod to HDMI 2.1 functionality, though, and all of the sockets are 18gbps HDMI 2.0s. A hardware upgrade to HDMI 2.1 will be offered towards the end of 2021, but this will involve returning the unit to a dealer and paying an as yet unknown additional cost.

While a lack of HDMI 2.1 functionality might be alarming, it’s only presently an issue for hardcore gamers. The JBL already supports 4K signals at up to 60 frames per second, which no movie source currently goes beyond, and format support is exemplary, with HDR10,

all supported on the video side, and

, Auro 3D and even IMAX Enhanced for audio. 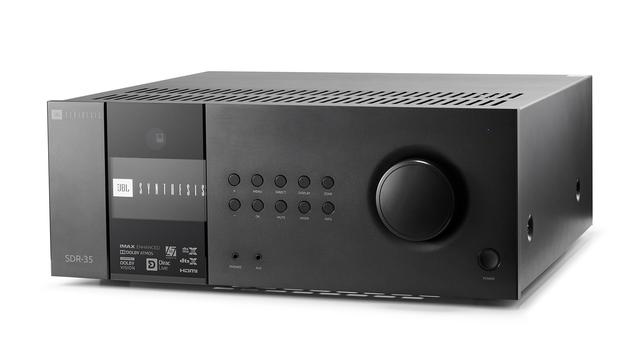 Dolby Height Virtualisation and DTS Virtual:X are also on board for those who want to simulate height effects without the use of physical ceiling or up-firing speakers.

There are plenty of ways to wirelessly get your content to the SDR-35, too, including

. It also works with Harman’s MusicLife app, which allows for streaming of music from the likes of

, plus tracks stored on your own network.

MusicLife takes care of podcasts and internet radio, too, and the SDR-35 has built-in FM and DAB tuners if you want to get your radio the old-fashioned way. Finally, it’s also

The JBL Synthesis SDR-35 looks significantly different from its Arcam relation, with the latter’s traditional grey finish and slightly dated styling being replaced by a more monolithic design finished in a classy matte black. Eight small buttons on the front allow for switching of inputs and navigating menus, and there’s a large and tactile volume knob. Next to the aforementioned 3.5mm aux-in is a 3.5mm headphone output.

The gloss black strip on the front of the unit houses a full-colour OLED screen that boldly displays the current input, format and volume, and can also be used to access the receiver’s menus. Text for the latter appears in a small font, though, so navigating menus and changing options from across the room isn’t really feasible. While menu options are displayed on the connected TV or projector, the complete menu system isn’t, and that makes navigation tricky that way, too.

The SDR-35 is a large device, measuring 17cm tall by 43cm wide. You will need a large, well-ventilated rack, particularly if you also plan to add a power amp or amps.

In all likelihood, anyone purchasing a JBL Synthesis SDR-35 will also have the installation and set-up done for them, and that’s worthwhile. It’s not that the receiver is vastly more complicated than other products of its type – in fact, in many ways it’s refreshingly straightforward – but getting the most out of the Dirac Live Room Correction takes a fair amount of knowledge and patience.

In our home cinema test room, the calibration actually weakens the delivery, but results in your room may well be more effective, particularly with a professional installer involved. Either way, switching between your Dirac preset (or presets) and the standard mode is just a button-press away, so it’s quick and easy to compare and contrast.

In our manually calibrated 7.1 configuration, the JBL Synthesis SDR-35 sings. As Deadpool does his piece to camera at the start of the highway gunfight scene in his first film, we’re immediately struck by the cleanliness and clarity of the delivery. There’s a beautiful naturalism to Ryan Reynolds’ voice – a richness and weight that makes less premium AV amplifiers sound a bit reedy and unsubstantial. In scenes with more characters, each voice has a clearly defined and unique timbre. Until you’ve heard a product that’s as well sorted as the SDR-35, you don’t realise how imprecise others are in this regard.

In quieter scenes, the JBL proves to be a nuanced and subtle performer, digging up the finest of details and deftly defining low-level dynamic alterations, but it’s also a true powerhouse when the action requires it. As the bullets start flying, there’s a hugely satisfying dynamic shift and a huge uptick in overall weight and heft. The leading edges of effects are crisply defined, but there’s none of the aggressiveness here that more affordable amplifiers fall foul of. Instead, that hit is fulsome, rich and solid. It’s satisfying in a way that few home cinema products can be.

The delivery is cohesive, too, both in terms of its tonality and its organisation. No frequencies stand out unduly, and effects are passed from one speaker to another without the listener’s attention ever being drawn to the process. You’re simply drawn into and immersed in the film you’re watching, which is just as it should be.

JBL makes a strong case for the SDR-35’s music credentials, and justifiably so. Playing Michael Jackson’s

Blu-ray, there’s unrivalled rhythmic and spatial precision to the presentation. Every instrument and vocal is crisply defined and given plenty of space in the surround field, creating a striking sense of being in the concert hall for the rehearsals. Detail levels, dynamics and timing are excellent, too, comfortably conveying the unbelievable quality of Jackson’s live band.

The JBL is a musical performer with stereo sources, too. You wouldn’t need to spend thousands for a stereo amp that sounds even better but the SDR-35 is very accomplished for an AV amplifier, delivering SBTRKT’s

Trials Of The Past

with plenty of urgency and punch, the opening of Møl’s

with an enchanting sense of space and growing threat, and Nick Cave and Warren Ellis’s

with layers of texture low-level dynamic subtlety. This is about as hi-fi as home cinema products get.

The JBL Synthesis SDR-35 is an extraordinarily good home cinema receiver. Its spec sheet may lack a little in terms of amplified channels and absent HDMI 2.1 compared with more mainstream AV amps from the likes of Denon, but in terms of sound quality, it’s in a whole different league, delivering music and movies with a truly rare maturity and sophistication.

The Arcam AVR30 could yet prove to be a better performance-per-pound purchase, and we hope to find out shortly. In its own right, though, this JBL is a stunner, and if we were building a high-end home cinema from scratch, it would be the first component on the shortlist.

Read our guide to the

What Hi-Fi?, founded in 1976, is the world's leading independent guide to buying and owning hi-fi and home entertainment products. Our comprehensive tests help you buy the very best for your money, with our advice sections giving you step-by-step information on how to get even more from your music and movies. Everything is tested by our dedicated team of in-house reviewers in our custom-built test rooms in London and Bath. Our coveted five-star rating and Awards are recognised all over the world as the ultimate seal of approval, so you can buy with absolute confidence.

Read more about how we test