Home » Technology » Jawbone updates UP2, UP3, and UP4 devices with heart rate, sleep features

Jawbone has unveiled a new Yves Behar-designed band design for its UP2 tracking device and announced a new firmware update for a few of its fitness tracking devices that will enable new heart rate and sleep tracking features. The company

that it would replace existing UP2 users' devices with the new one if requested because of an issue with the legacy device's clasp.

Until now, the UP3 and UP4 devices have only tracked resting heart rate first thing in the morning. Now, these devices will also monitor passive heart rate, which is recorded throughout the user's day, during moments when users are still. The app will then help the user understand how resting heart rate compares to passive heart rate so that users can see how certain factors including caffeine, diet, and stress can affect their heart in daily life.

The automatic sleep detection update allows users who wear the band to bed to monitor when they fall asleep at night and when they wake up in the morning without needing to change modes on the band. The UP devices will send this info to the UP App, which will generate a sleep graph for the users.

Jawbone's newest UP2 tracker will be available online at Amazon, Jawbone, BestBuy, and Target immediately, and the company said the tracker would also be available at brick and mortar Best Buy, Target, and Apple stores coming in the following weeks. The return of Jawbone devices to the Apple store is relatively new.

Apple pulled a number of wristworn fitness tracking devices from its stores, including Jawbone UP24 and Nike FuelBand SE, a Jawbone executive revealed that the company’s devices would return to the Apple Store in the coming months.

Jawbone has made news a number of times this summer, though little of it was product-related -- Jawbone filed a few lawsuits against its competitor Fitbit. 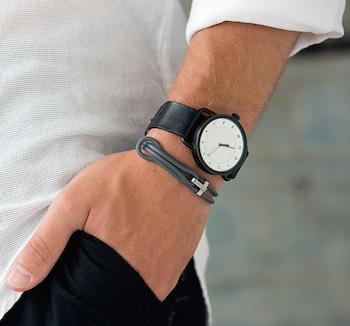 The Fitbit-Jawbone lawsuit feud first began in May, just a few weeks after Fitbit filed for an IPO. In that suit,

that Fitbit poached employees who downloaded sensitive data about Jawbone before leaving the company. Then in June,

, this time Jawbone sued Fitbit over alleged infringement of three patents Jawbone obtained when it acquired BodyMedia in 2013. BodyMedia’s extensive IP catalogue was one of the key drivers of that acquisition.

that Jawbone is trying to get the US International Trade Commission to block Fitbit’s imports into the US based on the same complaints that form the basis of the two lawsuits against Fitbit.

Fitbit filed its own lawsuit