Home » Technology » How to make more cash with goodies from peanuts Stay Ahead!

The crop is mostly grown on a small scale for its edible seeds. These areas have a tropical climate suitable for farming.

According to United States’ National Peanut Board, there are two main varieties of peanuts in Kenya namely the runner type and the bunch type (Red Valencia).

Bunch varieties are a small, tastier, and highly marketable variety. It matures in 60 to 75 days.

The runner is the larger variety and is preferred because of the high yields, it matures in 90 to 100 days.

This is because of the increased demand for peanut products such as peanut paste which is used as an ingredient in sauces and peanut butter.

Adding value to groundnuts makes them more marketable. Rebecca Aloo sells locally made products from groundnuts at an organic market.

She sheds more light on the products that can be produced from peanuts.

A kilo of red groundnuts fetches around Sh100 to Sh200, depending on the area and when you add value, you multiply your profits. 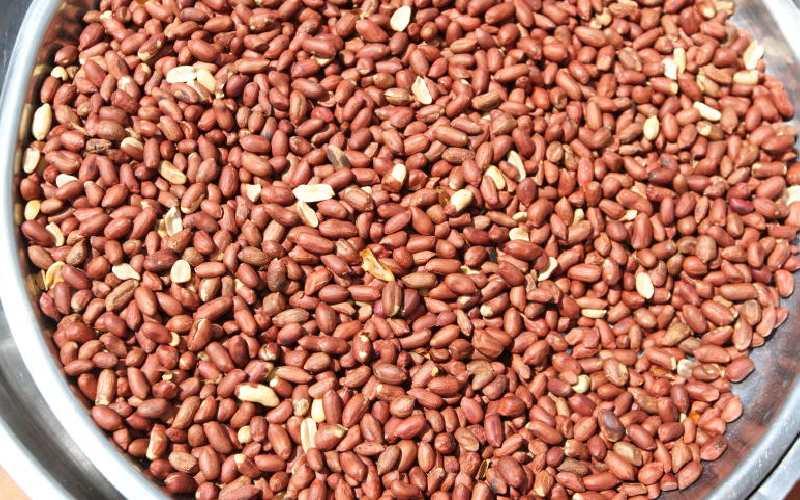 1. This healthy, all-natural flour is made by grinding peanuts and removing most of the oil, resulting in a nutrient-dense food that has more than twice the protein of all-purpose flour.

Not only does peanut flour have good nutritional value and great flavour, but it can also be used to spruce up meals and snacks.

“It can be mixed as an ingredient to other flours to make nutritious porridge, used to prepare stew or soup, and as a great source of protein.

The options and opportunities are many,” she says. A kilo goes for Sh400.

2. This is an everyday go-to snack, a reason enterprises have taken advantage to package and sell them in supermarkets.

One only needs groundnuts, water, and salt to prepare them.

“Mix the water, salt, and groundnuts in a pan. Start with the heat on high for a few minutes.

Keep tossing and turning the groundnuts until you start seeing the salt and water paste start to fall off the peanuts.

3. Peanut butter is pasted or spread made from ground, dry-roasted peanuts.

Peanut butter is widely consumed in many countries creating a ready market for processors.

Peanut butter is high in protein and essential minerals, though it also contains saturated fats and is high in calories.

4. These are popular where groundnuts are common. Fully mature ones do not make good quality boiled peanuts, rather raw or green ones are best preferred.

The most palatable peanuts for boiling are the Valencia type.

Peanut shells are great for mulching. This is because they are a good source of nitrogen, phosphorus, and potassium.

“Add cotton seed to broken-up peanut shells to help them decompose and avoid compacting after rain.Then apply as for other mulches,” Aloo explains.

5. This is rich in vegetable oil from peanuts. Peanut oil is used in cooking and to make medicine.

Other products that can be produced from groundnuts are honey roasted peanuts, peanut butter cookies, peanut sauce, among others.

Aloo says the biggest challenge is getting enough groundnuts to process.

“Peanuts are very marketable. The aim for value addition was to create a ready market for dozens of groundnut farmers who were struggling to get a market,” says Aloo.

However, she says farmers are not producing enough, therefore they have to import from Malawi.

“A huge percentage of what is consumed here is from Malawi. In Kenya, only about 1.5 tonnes which could be processed is produced,” says Aloo.

She says the best groundnut variety for peanut processing is the red variety which in Malawi is known as SG7.

Besides the task of finding groundnuts, there is the issue of aflatoxins which gives processors a hard time. But farmers in Malawi have been trained and there’s does not go beyond eight per cent.

With the raw materials from Malawi, the processor says they are able to meet market demands both in terms of quality and quantity.