What does all this mean for users? How can people protect themselves from some of the risks associated with social media?

We turned toBrian Primack,who studies some of these issues as a professor of public health and medicine and dean of the College of Education and Health Professions at the University of Arkansas. Dr. Primack, the author of the book “You Are What You Click,” talked about how people can have a more empowered relationship with social media. Here are edited excerpts:

WSJ: Are people taking stock more of the role social media has in their lives? If so, why now?

DR. PRIMACK: I do think it’s true. I think that social media and related technologies are being understood as the sharpest double-edged sword of our era. We’ve all had the experiences where they can catalyze connection and warmth and generosity. And we’ve also seen that they can breed feelings of depression and anxiety, and even isolation and hatred.

And so I think the question becomes, how can we balance these different challenges? This was already going on before Covid. But Covid was a catalyst that advanced both some of the positives as well as many of the negatives of social and digital technology and communication. What would have happened in maybe 10 or 15 years instead happened in a year and a half in terms of our reliance on these technologies, using the technologies more and experiencing more of both sides of that double-edged sword.

WSJ: What’s the effect of more people thinking critically about their use of social media?

DR. PRIMACK: People are becoming more understanding of the fact that they need to think about how they use social media more consciously. These are things we’ve been thinking about, on a surface level, but we need to think about in a much deeper way.

It took an entire industry, over decades, to sit back and say: Wait a second, we need to create a food pyramid that helps us manage that balance. The answer is obviously not to stop eating. But we also need to recognize that it’s very easy to overindulge, and a lot of foods are designed to be addictive—just like a lot of social-media sites are designed to bring you back for more, and keep you there as long as possible. 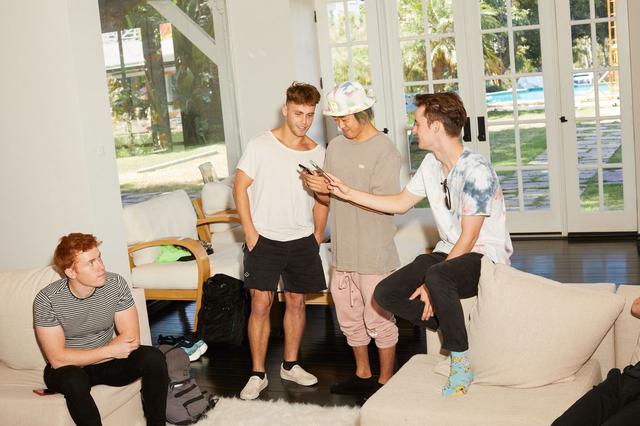 What platforms do is say, how can I deliver as much of this as possible? It might be that that emoji does convey some of the true human need, but it might not. It might just be something that capitalizes on a vulnerability of human beings, and keeps us coming back for more, but never really necessarily getting the nourishment that we need.

WSJ: What was the experience of people you’ve encountered who struggled with social media?

DR. PRIMACK: Their experience was very mixed. Generally there’s a lot of positive, there’s a lot of negative. And when they don’t think very carefully and critically about how they’re using it, the negative often outweighs the positive, leading to potential depression and anxiety.

The reason isn’t necessarily that we experience more negative. It’s that in society there is a negativity bias: Certain things that are negative affect us more. If you’re taking four classes, and you have three A’s and a C, you’re thinking about that one problem. When people have many good experiences on social media, but just a couple of miscommunications and misrepresentations and gaffes, those are likely to take over, especially in certain circumstances. I think the reason that we’re seeing this overall trend toward there being a really strong influence on negativity is just that negativity can be so powerful.

WSJ: Can you explain the relationship between the amount of time people spend on social media and the number of platforms that people use?

DR. PRIMACK: The way I would summarize it is that both time, and also number of platforms, are independent. Each of them is independently related to things like depression and anxiety.

We have some studies that show that when you look at large groups of people, the amount that they use social media is directly, linearly related to their risk of things like depression and anxiety.

But then we found this other interesting tidbit, which is that the number of platforms that someone uses is independently related to those negative outcomes, like depression and anxiety.

In other words, you might say, well, of course, it’s related, because you just told me that using social media more is related to more negative outcomes. So if you’re using seven platforms, presumably you’re using for a longer period of time than somebody who’s using two platforms.

But the thing that was interesting about that study is that even if you take out the influence of the amount of time, the number of platforms that somebody uses is independently associated with those negative outcomes. So even if you and I both use exactly two hours a day, but I use seven platforms in an average week, and you only use two platforms in an average week, I’m three times as likely to be depressed, even though we really do use the same amount of time of social media.

WSJ: Why can the number of social-media platforms you use affect your mental state?

DR. PRIMACK: One reason could be that each platform is like its own little world: They each have their own idiosyncratic set of rules. Too many rules may simply be too dizzying. You’re more likely to make some sort of a gaffe, and you’re less likely to be able to take advantage of the potentially positive things. It would be very difficult to be good friends with seven different groups of people in real life.

Ultimately however, we really don’t know exactly the reason for what’s happening here. We need to do more research. Also, these are all tendencies. This doesn’t mean that every single person who uses a lot of platforms is immediately going to become depressed.

WSJ: Of all of the platforms, Facebook seems to draw the most attention. Is that appropriate?

DR. PRIMACK: Probably the reason we hear so much about Facebook and Instagram is that they are so commonly used. But I think we need to ask more nuanced questions. Should we all be on Facebook? There are so many platforms out there that are tailored to specific markets and interests.

One of the principles of being creative with your social-media use is recognizing that there are choices. It isn’t really which one is bad, or which one is good. It’s matching your own individual needs and desires and wants to the right platform.

DR. PRIMACK: We did some studies looking at the kinds of friends people have on social media. In one example, we looked at the percent of a person’s friends on a social-media site they had met face to face. In this nationally representative study, we found people had never met about 35% of their contacts face to face. And for every additional person in their contact list that they had never met face to face, they were significantly more likely to be anxious or depressed.

What this means is that, in general, people who knew everybody in their list, and had a face-to-face relationship with them, were much less likely to be anxious or depressed, compared with someone who had lots of contacts who were people that they had never met. One of the possible reasons for that is when you already know somebody face to face, you might not be as affected by social comparison.

For friends I’ve never met face to face, I don’t notice the reality of their complex situations. If they’re all posting about all the wonderful things that happened to them, I just sort of take that at face value, and I feel like I can’t measure up. However, if everyone on my list is someone that I know face to face, I know them as a more complete person. I know they have good times and bad times, that they had a divorce, etc. Then, when they say something good happened to them, instead of feeling like I’m inadequate, I see that in perspective. I think, oh, wow, I’m so glad that a good thing happened to this person, because their life—just like mine—is messy.

Ms. Wells is a reporter in The Wall Street Journal’s San Francisco bureau. She can be reached at georgia.wells@wsj.com.