Republicans will pick a nominee in the 10th Congressional District this weekend.

The district will hold a firehouse primary on Saturday to choose its candidate to take on Democratic U.S. Rep. Jennifer Wexton.

How to vote: Here’s how the primary will work

Wexton, of Loudoun County, was first elected in 2018 and is seeking her third term

The 10th District was reconfigured this year to span Rappahannock, Loudoun, and Fauquier counties, western Prince William County, Manassas and Manassas Park cities and a small portion of Fairfax County.

Eleven candidates are seeking the GOP nomination in Saturday’s contest.

Jeanine Lawson is a two-term Prince William County Supervisor running for the Republican nomination in Virginia’s 10th Congressional District, with her campaign focused on conservative values and local control.

Prince William County Supervisor Jeanine Lawson led the way in fundraising among the candidates at the last campaign finance report.

Lawson won a special election to the Brentsville District seat in December 2014 to replace Wally Covington, who resigned after being appointed to a judgeship. She was re-elected in 2015 and 2019, receiving about 55% of the vote in the most recent race.

Lawson received a bachelor’s degree in political science from the University of Northern Iowa. She is a supporter of The Family Foundation, a Christian policy nonprofit, and the Prince William County Conservation Alliance. She is an active member of Grace Community Life Church in Bristow.

“The high tax-and-spend agenda coming from Washington, D.C., penalizes hardworking families while efforts to defund police departments and push insidious agendas, like critical race theory on our kids, are putting our commonwealth and country in crisis,” Lawson has said.

Entrepreneur and farmer Caleb Max is seeking the Republican nomination to represent Virginia’s 10th Congressional District in the U.S. Houses …

Loudoun County businessman Caleb Max is the grandson of former U.S. Rep. Frank Wolf, who held the 10th district seat for 34 years and was its last Republican representative.

As a teenager, Max started a commercial and residential landscape business, Caleb’s Country Services Inc. He bought Pica Deli in Reston in early 2020 and said his experience as a small-business owner is shaping his political run.

Max has called Wexton a party-line Democrat who “wants an ever-expanding, over-spending federal government, without regard for our already massive national debt.” He’s also said Democrats have “launched an assault” on education and religious freedom.

“This is a beautiful country we have here and we should be spending the majority of our resources on protecting it and not getting involved in overseas wars and conflicts that we can't win, and that cost billions of dollars and a generation of lies,” Max said, according to the Rappahannock News.

Cao is an immigrant from Vietnam who spent seven years in Africa before moving to the U.S. and joining the Navy.

Cao has focused a large part of his campaign on foreign policy.

“I left Kabul in January of 2021, and it was pretty stable,” Cao said, according to the Washington Examiner. “Six months later, we watched Kabul fall, and that was just like watching Vietnam fall. … Now watching Ukraine, that was just the tip of the iceberg.”

Editor's note: Cao did not respond to a Rapp News request for an interview, so there is not a an individual Q&A with him.

Q&A: Brandon Michon: ‘you need to be a voice of the people, not a voice of one group or the other’

Brandon Michon of Loudoun County made a name for himself taking the Loudoun School Board to task over closing schools during the COVID-19 pandemic. 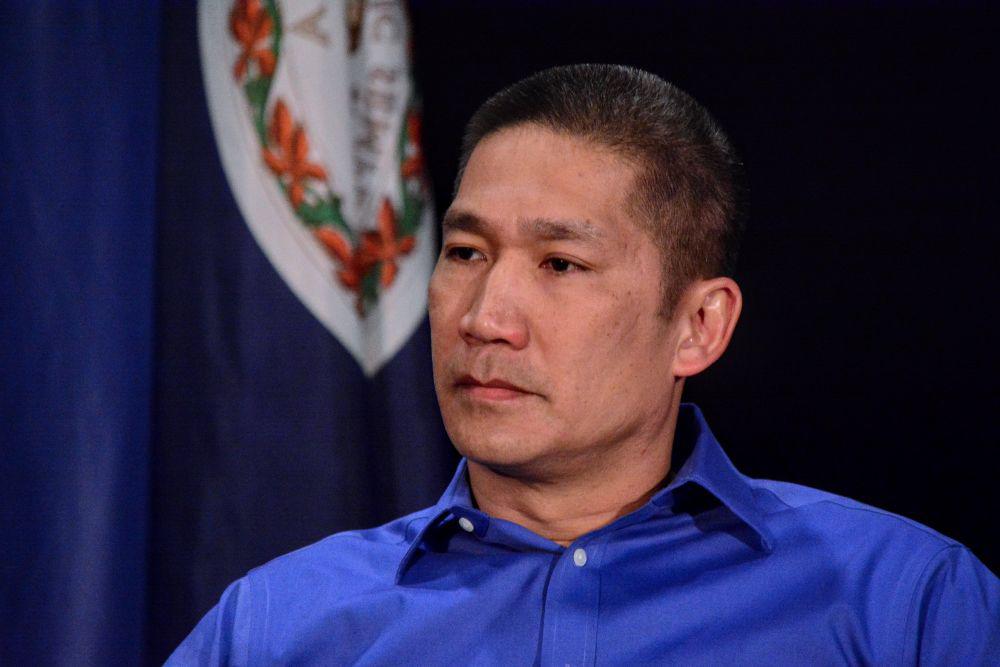 Michon’s testimony to the board went viral after he said board members “should all be fired from their day jobs” because they were “more inefficient than the DMV.”

“The garbage workers who pick up my freaking trash risk their lives every day more than anyone in this school system. Figure it out,” Michon said at the meeting. “It’s not a high bar.”

Michon is a managing director of a commercial real estate finance company. His campaign has focused on education, financial literacy and trade programs.

Henley served as an aircraft maintenance technician during Operation Desert Storm after enlisting in the U.S. Air Force. Henley retired from the Air Force in 2019 and is now a hobbyist farmer and owns a small agricultural business.

John Henley served 28 years in the U.S. Air Force and retired as a colonel, according to the Rappahannock News.

Henley is now a farmer in Coatesville.

Henley helped craft the legislative proposal that became the U.S. Space Force under the Trump administration, the Rappahannock News reported.

“So from a national security perspective, I don’t think you’ll see anybody on this panel with the credibility and expertise that I bring on day one,” he said.

Former intelligence worker David Beckwith spent 30 years on active duty in the U.S. Air Force and retired as a colonel.

In the Air Force, Beckwith was a military program manager and engineer. Since 2018, he has served as a federal Defense Intelligence Senior Leader.

On Beckwith’s website, he says he has “proven leadership analyzing and solving real-world defense problems, stewarding federal budgets, and going beyond political agendas to deliver national security and defend the taxpayer’s dollar.”

“It’s time to stop hearing excuses from your leaders,” his website says. “It’s time to expect more. Join me as I stand up for Virginia’s and America’s future.”

Loudoun County businessman Mike Clancy is senior vice president of Oracle Corp., a multinational computer technology corporation headquartered in Austin, Texas. The company was the second-largest software company in the world by revenue and market capitalization in 2020, according to Forbes.

Clancy served on Gov. Glenn Youngkin’s technology and cybersecurity transition team. He has a bachelors in government and philosophy from the University of Notre Dame and a juris doctor from The George Washington University Law School.

“The Democrats have launched a relentless assault against your individual liberty and your constitutional rights, and they're coming after you every single day with the cancel culture,” he said, according to the Rappahannock News. “And I’m the best person in Congress, not only on day one but over the whole term, to fight for you and fight for their constitutional rights.”

Q&A: Theresa Ellis: ‘I’m not so caught up in the political part of it, I’m more caught up in serving the people’

Manassas City Councilor Theresa Coates Ellis was elected to the City Council in 2018 and is its lone remaining Republican. Her four-year term expires this year.

She lost a bid for mayor to Democrat Michelle Davis-Younger in 2020.

In a statement announcing her candidacy, Coates Ellis said she would “continue to fight against higher taxes and wasteful spending. I pledge to protect our freedoms and defend our constitutional rights that we are ALL granted.”

She voted last year to lower the city’s real estate tax rate in an effort to keep bills flat for homeowners amid rising assessments. More recently, she celebrated her successful effort to make Manassas a member of Bee City USA with the city’s first Bee Festival. A graduate of George Mason University, she also serves on the Manassas Regional Airport Commision.

“We must act with common sense to provide resources to our schools and teachers to maintain safety while providing our children with the high quality education they deserve. Our children will not be left behind; they are our greatest natural resource,” she said in a statement.

Beatty is the IT Director at The Heights School in Potomac, Maryland and teaches computer science classes. Beatty worked at a number of technology companies in the Washington D.C. area, according to his website, including comScore and TaxiMagic.

John Beatty was elected to the Loudoun County School Board in November 2019. He represents the Catoctin District, which covers central and northwestern Loudoun County.

“I've been fighting the fight on critical race theory which has been disguised as equity, about school closures, and most recently, I was the sole vote for the governor’s [recommendation on ending] the mask mandate,” he said previously.

Beatty is the information technology director at The Heights School in Potomac, Md. He teaches computer science classes, mentors students on independent projects and manages the school’s technology needs.

A native of Portsmouth, Beatty graduated from Virginia Tech with a bachelors in computer science.

Q&A: Dr. Brooke Taylor running in the 10th district: ‘This is the part of America that's good and pure’

Taylor, who has a master’s and doctorate from Regent University, has taught at both Regent and Liberty University, worked with the U.S. military, worked as a defense subcontractor and managed appropriation portfolios for the U.S. Congress.

Brooke Taylor, a former strategic analyst at the U.S. Department of Defense, has taught in government programs at Regent and Liberty universities.

Taylor earned her masters and doctoral degrees from Regent University.

She has criticized the Biden administration, saying it “does not have a plan,” for the U.S. response to Russia’s invasion of Ukraine.

“President Biden, Nancy Pelosi and Jennifer Wexton, have weaponized our institutions, including the educational system,” she said previously. “Critical race theory is now critical thought. … I know firsthand that our children's education can never be outsourced to a centralized form of government. Parents, not bureaucrats, are in charge of their children.”

Jeff Mayhugh, of Prince William, has been co-owner of Hardhits Custom Apparel since 2005.

On his website, Mayhugh said he worries about “the lack of leadership Congress has provided in my lifetime. It’s probably the worst stretch in our history.”

“I’m just a regular guy who thinks deeply and loves his family,” his website says. “I’d rather be building one of my business ideas or helping my community love reading the way I do. I’m not interested in fundraising or name calling. I am interested in doing the work necessary to make this country the beacon of hope it should be.”

Sign up for Rapp News Daily, a free newsletter delivered to your email inbox every morning.