MIAMI|Gentrification has been disastrous for Little Haiti. However, Father Reginald Jean-Mary, Notre Dame d’Haiti’s pastor, has come up with a solution: technological empowerment.

“Instead of a hand-out, we want to give the Haitian-American community a hand up,” he said at the opening of the Microsoft Accelerate Tech Lab at the Pierre Toussaint Leadership and Learning Center. The center has been a fixture on the church grounds for 40 years. Miami-Dade County officials and Microsoft employees joined church members at the April 22, 2022, opening ceremony.

The tech lab has 66 new slide-out VersaTables computer desks and is the first of its kind in Miami-Dade County. It provides local students with access to technological and scientific learning opportunities and is part of Mayor Daniella Levine Cava’s efforts to increase opportunities for county residents amid Miami’s current tech boom.

“Little Haiti will soon be future-ready with your help,” said Mayor Levine Cava.

Notre Dame d’Haiti’s Deacon Mesmin Augustin urged those at the ceremony to scan a QR code on a card given out to everyone and donate to the lab via their cell phones. The annual budget for the lab is around $700,000.

The Pierre Toussaint center opened a computer lab last year to teach Haitian Americans without computer skills the basics of computers. The tech lab expands that teaching to those wanting more advanced courses, such as coding. Donations from Notre Dame d’Haiti parishioners got the program started. 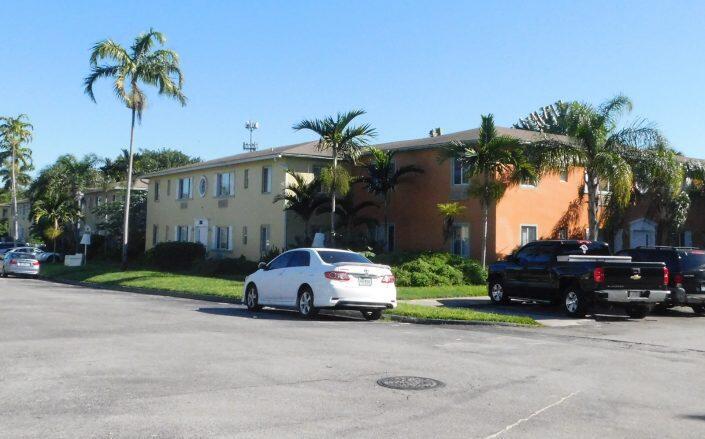 Microsoft launched Accelerate Miami-Dade in partnership with the county and other civic and community groups. The goal is to bridge the digital divide in the county and prepare young people from areas such as Little Haiti for higher paying careers.

When he got down to the end of the corridor and entered the classroom, Patrick Morris, Miami-Dade director of Civic and Philanthropic Partnerships, said he was surprised by the state of the classroom.

“I was blown away when I entered the tech lab,” said Morris. “This is a real game-changer.”

The partnership with Microsoft Accelerate through Miami-Dade County is a revolution in the field of technology for Little Haiti, said Father Jean-Mary.

“It is a divorce from mediocrity,” he said. “We must all continue to work together to minimize and mitigate the impact the ever-changing demographic is having in our community, especially on vulnerable youth and those without technological access.”

Jacky Wright, chief digital officer for U.S. Microsoft, said that Miami-Dade has one of the nation’s largest digital divides.

“Miami-Dade is experiencing a tech boom that looks poised to quickly deliver hundreds of high-paying technology jobs in fast-growing emerging industries to the region’s economy that is currently dominated by lower wage service-oriented jobs,” she said. “Those communities on the other side have been especially hard hit by the pandemic crisis and face barriers to acquiring new-economy skills.”

Community and learning partners will help deliver the curriculum and credentials programs that empower job seekers. Microsoft is providing global resources, including free courses across Microsoft Learn and LinkedIn. Microsoft is leasing 50,000 square feet on Brickell Avenue for a new regional hub.

“A measurement of the program’s success in creating skilled individuals will be the economic development and mobility in underserved communities,” Wright said.