The 2015–2016 refugee crisis in Europe was sudden and unexpected. The humanitarian consequences were dire, with thousands of asylum seekers dead or missing in the journey1. The consequences in countries of destination also were significant. The actions taken by governments to uphold access to asylum procedures were generally reactive, uncoordinated and ineffective.

One important cause of the ineffective responses was a poor capacity to anticipate the movements of asylum seekers2. Forecasting asylum-related migration is indeed extremely problematic. Migration is a complex system3, which means that causal factors interact nonlinearly, are highly context dependent, and show little or no persistence over time. Potential drivers are diverse4,5, plus effect sizes and interactions vary widely between and within individual migration flows. In one context extreme conflict, violence and persecution may generate few asylum seekers; whereas elsewhere relatively subtle social unrest may spark large international displacements, particularly if they are a tipping point of deteriorating conditions. The effect of migration drivers is subject to threshold and feedback effects. Once activated, country to country flows tend to trigger self-reinforcing processes resulting in the establishment of migration systems6,7,8.

Migration is therefore a highly uncertain process9, which complicates migration modelling10. Among migration types, forced or asylum-related migration is associated with the highest uncertainty9,11. As a consequence, most quantitative asylum migration models focus on single drivers in countries of origin (e.g. conflicts12,13,14) or destination (e.g. migration or asylum policies15,16,17). Some more comprehensive asylum migration models have been developed, but these aim to increase retrospective understanding12,18,19,20,21,22 or provide alerts23 rather than forecasting flows, with exceptions mostly confined to the prediction of single country to country flows24.

Data on migration in general and its drivers also contain uncertainty, which further complicates migration modelling25. Despite recent advances in the collection of official statistics, particularly in the subfield of asylum, and in spite of the ongoing efforts to improve data collections at the international (notably in the European Union at Eurostat, the European Asylum Support Office (EASO, the European Union Agency for Asylum), the European Border and Coast Guard Agency (Frontex), and the European Commission's Knowledge Centre on Migration and Demography) and global (particularly at the International Organization for Migration and the United Nations Refugee Agency) levels, most data collections are limited in terms of frequency, definitions, coverage, accuracy, timeliness, and quality assurance26,27,28. This is also the case for data on migration drivers such as conflicts, the state of human rights and the economy—notably with regards to their frequency, accuracy and timeliness—all of which are prerequisites for effective forecasting. 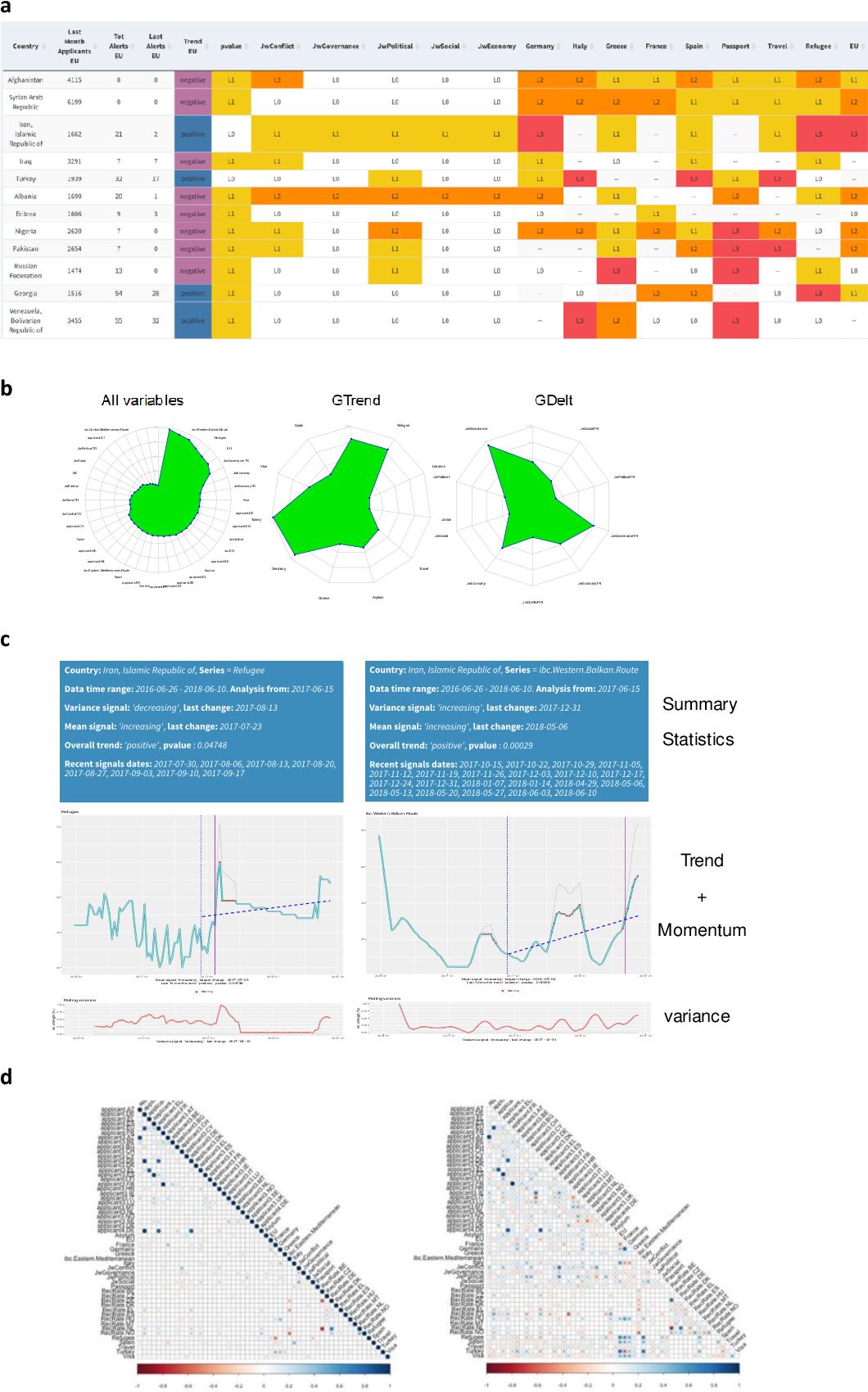 Recent advances in data and computational technology, as well as the application of the methods of physics and complexity science to societal challenges29,30, are opening up new avenues for modelling, explaining and predicting social processes. Innovative data and computational approaches underpinned some progress in asylum migration modelling and forecasting. Large data sets containing vast reams of structured and unstructured data have been proposed as an opportunity to observe potential migration drivers as they occur in near to real time31,32. New data sources include mobile data33, social media34,35, and internet searches36. Big data are increasingly analysed with such techniques as agent-based modelling37 and machine learning38 to detect patterns and identify potential migration drivers that would otherwise go unnoticed. Such advances enabled the development of novel migration forecasting models, including for forced and asylum migration, with encouraging results in terms of reliability and timeliness which makes them potentially useful in operational scenarios38,39. However, to our knowledge even the most advanced models have been applied to a limited number of flows rather than generalised to the regional or global levels.

Here we demonstrate that adaptive, dynamic machine learning algorithms can integrate administrative and non-traditional data at scale to effectively capture early warning signals of asylum-related migration and deliver short-term forecasts of asylum applications from any country of origin to any European Union Member State (hereafter EU Member State refers to countries that exchanged asylum data with EASO, that is, 27 EU Member States plus Norway, Switzerland and the United Kingdom.)—and in principle to any country that collects data on asylum applications with adequate frequency. Our system combines a range of data on migration drivers and processes at different locations: events and internet searches in countries of origin and transit to capture migration drivers5,40 and intentions36; detections of irregular crossings at the EU external border; and asylum processes in countries of destination to capture potential feedback effects of asylum processes and practices on the choice of destinations17,41.

Our modelling approach is grounded on migration theory and modelling, data science, and international protection. Theories of migration broadly inform our choice of covariates, but the approach is data driven. Our dynamic models are able to adapt to single dyads of origin and destination countries, using rolling windows of past data to select the migration driver configurations relevant to each dyad in a given time period. By modelling country-to-country dyads separately rather than attempting to build a single asylum migration model, we are able to address one of the most severe constraints to migration modelling—that is, that migration processes connect origin and destination countries in complex systems whose functioning vary largely over space and time. By delivering what is, to our knowledge, the first comprehensive system for forecasting asylum applications in potentially any context in which adequate data are available, we hope to contribute to international protection research and ultimately to better policy based on early warning and preparedness.