Home » Technology » Explaining cloud seeding in the UAE: The modern technology that’s making it rain in the desert

Dubai: UAE is one of the few places in the world where the sight of rain makes local news headlines. Residents here generally enjoy sun all year round, but over the last decade, successful cloud-seeding missions have been carried out in the country with fantastic results of rain.

With the assistance of modern technology, the UAE has been able to make the occurrence of rain more probable, and has also been able to enhance the amount of accumulated rain in the emirates.

And now, the UAE is aiming to become the global hub for rain enhancement that will improve water security in arid and semi-arid areas around the world, according to Alya Al Mazrouei, programme director of the UAE Research Programme for Rain Enhancement Science said to Gulf News.

The UAE is one of the first countries in the Arabian Gulf region to deploy cloud seeding technology, adopting the most cutting-edge technologies accessible on a worldwide scale and employing sophisticated weather radar to continuously monitor the country's atmosphere. Aside from the usage of a private plane, customised salt flares have been produced to meet the nature of the situation.

Over the last few years, the NCM was able to give mother nature a helping hand with some science, and accelerate the annual rainfall with its cloud seeding project.

What is cloud seeding?

During traditional cloud seeding flights in the UAE, natural salts or hydroscopic agents are shot into clouds to enhance rainfall. In 2021, UAE's NCM conducted tests to see whether electricity can be used during cloud-seeding operations to enhance rainfall over the country, and mitigate water stress in arid regions. 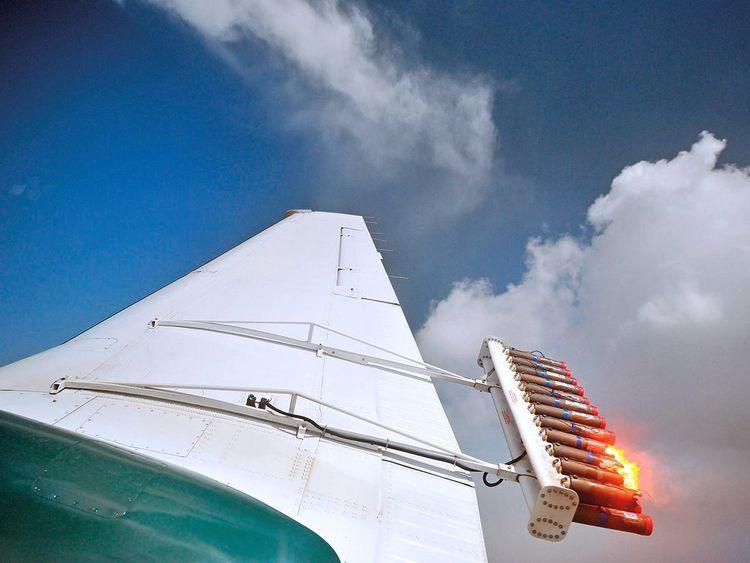 The programme initially began at the end of 1990, but by the end of 2000, the fully-fledged project was carried out in cooperation with a number of organisations and institutes, including the US space agency NASA.

In 2015, the UAE launched its US$5 million (Dh18.4 million) annual award to help scientists and researchers in solving global water challenges. As part of the UAE’s commitment to support initiatives in the field of rain enhancement, the REP unveiled an ambitious new plan at the beginning of October 2018 to integrate the programme’s nine awardee projects. At present, all winners of the annual grant are running in three different programme cycles.

It is now standard practice for the NCM’s cloud seeding section to use a sophisticated weather surveillance radar (WSR), which is responsible for monitoring the atmospheric pressure around the clock.

How does it work?

Scientists in the UAE are testing a new method of cloud seeding by using drones, which zap clouds with electricity. Jolting droplets in the clouds can cause them to clump together, researchers found. The larger raindrops that result then fall to the ground, instead of evaporating midair - which is often the fate of smaller droplets in the UAE, where temperatures are hot and the clouds are high.

Cloud seeding missions can only be carried out with cumulus cloud formations, so once they are identified, the NCM will quickly launch aircrafts carrying salt crystals – mixed with magnesium, sodium chloride and potassium chloride – that are shot into the skies.

The salt crystal flares then encourage the formation and release of cloud moisture, which then turns into precipitation.

Gulf News learned that the NCM has six pilots and four aeroplanes to carry out cloud seeding missions. The aim of the cloud seeding project is to increase the rain droplet to fall on the ground.

“It works by sending the aircraft to the cloud and targets the updraft to seed it, which helps the small rain droplets to be bigger and heavier, so it will fall to the ground,” said Al Obeidli, as he stressed that no harmful chemicals were used in the process.

The cloud seeding mission is not constrained by seasons and is carried out throughout the year when seedable clouds are detected. So while the project may boost the amount of rainfall, it cannot take all the credit for rainfall as the global success rate of cloud seeding lies between 15 to 30 per cent.

According to the World Meteorological Organisation, as many as 56 countries are using cloud seeding technology to mainly combat droughts in places like China, Indonesia and the US.

Recent statistics further indicate that two-thirds of the world's population may face water shortages by 2025, according to the World Wildlife Fund.

While the rain-making project continues to be studied by countries around the world, the UAE remains at the forefront in paving the way for international cloud seeding research.

The United Arab Emirates has what qualifies as a desert climate. Desert climates are the most common type of climate on earth after the polar climate. Over two-thirds of the earth’s surface is covered in water from the oceans.

The remaining one-third of the earth's surface is dry land on which humans live, but a third of that dry land is really dry. It’s the desert. Much of the deserts in the world are located north and south of the equator, these are called the subtropical zones.

The UAE’s subtropical desert climate is characterised by mild winters and very hot summers, in which the humidity of the Arabian Gulf, which could make the heat unbearable in between June and September.

Rain in the UAE

Naturally-occurring rain is generally rare for hot desert climates. Annual precipitation is below 100 millimetres (4 inches) and is concentrated in the winter months.

But when it does rain, it occurs in the form of showers or downpours, which can sometimes be quite intense, which many UAE residents can attest to. Additionally, the UAE has had many instances of induced rain. The NCM revealed that they conducted a total of 219 cloud seeding operations across the UAE in the first six months of 2020 to enhance the country’s water supply.