What Is the Digital Divide?

The digital divide refers to the gap between demographics and regions that have access to modern information and communications technology and those that don’t. Though the term now encompasses the technical and financial ability to utilize available technology—along with access (or a lack of access) to the Internet—the gap it refers to is constantly shifting with the development of technology. When the term was first used in the late 20th century, for example, it described the gap between those who had cellphone access and those who did not.

The digital divide describes the gap between people who have access to affordable, reliable Internet service (and the skills and gadgets necessary to take advantage of that access) and those who lack it.

This is an issue within many countries, with rural populations much more likely to be cut off from digital technologies than city residents are. The divide also exists among countries and continents. And it exists between men and women: In 2019, 55% of the global male population was using the Internet, compared with 48% of the female population.

Beyond the gaps between developed and developing countries, rural and urban populations, and men and women, there are other types of digital divides:

These gaps in connectivity and skills reflect existing differences in wealth and access to education, as well as gender discrimination. The digital divide also exacerbates these same differences by barring many people from the information necessary to break out of their current living situation.

For many years, the global digital divide was seen as a consequence of economic development. As countries and individuals became richer, the common expectation was that they would purchase digital devices and infrastructure and the digital divide would close naturally.

Yet incomes have risen around the world over the past two decades, and access to digital services has remained stubbornly low in much of the developing world. In many cases, this is due to a lack of investment in Internet infrastructure. Citizens may have Internet-enabled devices, but still no connection to the World Wide Web. The Internet penetration rate still varies widely among continents: In 2020, 94.6% of North Americans had Internet access, compared with 39.3% of Africans. 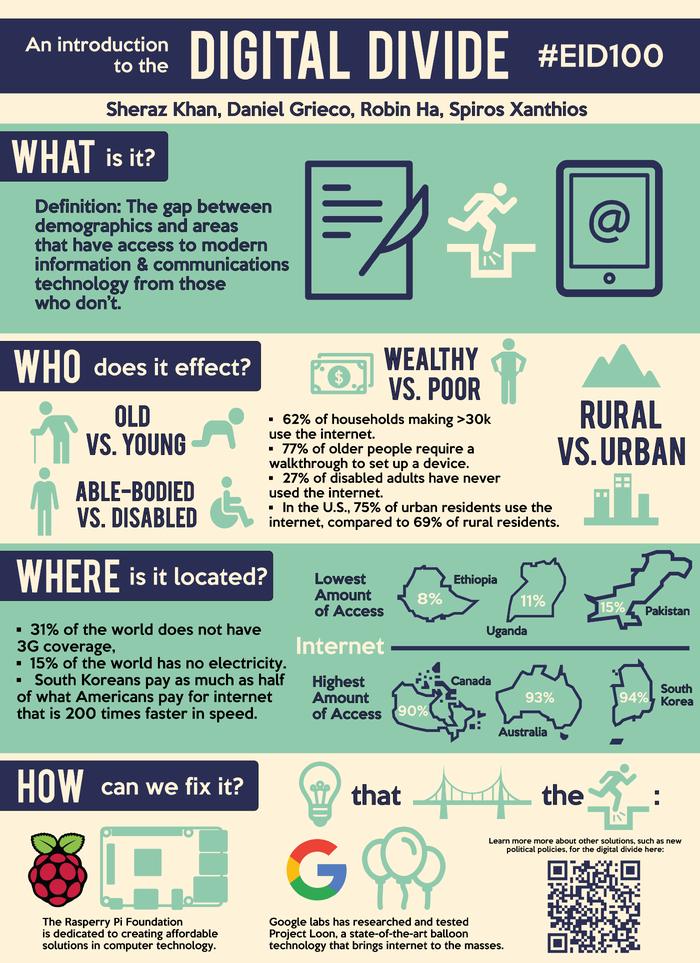 However, those statistics hide a great deal of variation within countries and regions. Large countries with ocean borders tend to have much better Internet access, even when they are underdeveloped in other areas. This is why, in 2020, the International Telecommunication Union (ITU), the United Nations agency for information and communication technologies, started to provide statistics on landlocked developing countries and small island developing states based on aggregate statistics in the developing world.

Similarly, there are major disparities in Internet access even within highly developed countries. Many rural Americans are still without adequate Internet access, and still more lack the skills to take full advantage of the access they do have. Indeed, the most accurate predictors of the digital divide are not age or country. They are educational level and the urban-rural divide. According to recent studies, roughly 72% of people living in urban areas globally have Internet access in their homes, compared with 38% of those who live in rural areas.

Some analysts fear that, instead of narrowing, the digital divide is getting wider. In addition, some questionable business practices appear to be widening the gap even within developed nations: The ongoing debates about net neutrality and versioning can be seen as issues about equitable access to the digital world.

Consequences of the Digital Divide

Until quite recently, access to the Internet was seen as a luxury, and disparities in digital access were seen in largely the same terms. However, there is now widespread consensus that technological discrimination is a form of social exclusion because it deprives certain citizens of essential resources for wealth development.

This is most visible when one looks at the balance of the world economy and particularly at the rapid growth in the number of jobs that require digital access and skills. In the U.S., for instance, nearly half of all jobs in STEM (science, technology, engineering, and math) are in computing. In 2020, there were approximately 1 million unfilled computer science positions. Lack of access to learning these skills is a barrier to these jobs and the income that comes with them.

You don’t have to aspire to a career in tech to be affected by the digital divide. The impacts of the phenomenon reach many people, in several important ways:

As the world becomes increasingly dependent on digital technologies, these consequences are likely to become more serious and widespread. It is incumbent upon societies to address the digital divide in a holistic way that recognizes its many aspects and negative outcomes.

In recent years, programs have been launched that aim to combat particular aspects of the digital divide. Many of these are being coordinated at the highest level, including within the U.N.’s Sustainable Development Goal (SDG) 9, which allows individual countries to coordinate their activities toward ending digital discrimination.

Within the developed world, some analysts point to successful 20th-century programs that lifted millions of people out of poverty. One commonly mentioned example is the Rural Electrification Act during the Great Depression, which stands as an example of how the government can help provide technology to underserved areas that private companies don't consider profitable enough to include in their networks.

In addition, these two programs have been launched in the past few years to address other aspects of the digital divide:

Many countries now also run digital literacy programs aimed at teaching both adults and children the skills necessary to breach the digital divide.

The Infrastructure Investment and Jobs Act and the Digital Divide

On Nov. 15, 2021, President Joe Biden signed the Infrastructure Investment and Jobs Act into law. Passed with bipartisan support in both the Senate and the House, the many-faceted bill takes dead aim at reducing the digital divide by providing $65 billion to bring high-speed Internet to rural areas of America. Providers who accept the funds are required to offer a low-cost, affordable plan to consumers and display a broadband nutrition label, which will allow people to comparison-shop for the best offer. It also mandates that the Federal Communications Commission must adopt rules prohibiting digital redlining and creates a permanent new perk to help low-income households access the Internet in the form of an affordable connectivity benefit, for which more than one-fourth of American households will be eligible.

Wrapped into the bill is the Digital Equity Act, originally proposed by Sen. Patty Murray (D-Wash.) in 2019 and co-sponsored by Sen. Rob Portman (R-Ohio), which establishes two new federal grant programs “to promote digital equality nationwide.” One program will be run by state governments and provide “state-by-state digital equity planning followed by implementation grants to qualifying programs.” The other program creates a yearly national competitive grant program “to support digital equity projects undertaken by individual groups, coalitions, and/or communities of interest anywhere in the U.S.”

What Is the Digital Divide?

Who Is on What Side of the Divide?

The divide exists in myriad ways, including between urban and rural areas, developed and underdeveloped countries, men and women, and even ocean-bordering and landlocked countries. In all of those cases, the former category is doing better than the latter.

What Is Being Done to Close the Digital Divide?

There are programs to alleviate the situation, both internationally and in the U.S. The former group includes the Alliance for Affordable Internet, which aims to lower the cost of broadband around the globe; One Laptop Per Child, which supplies low-cost laptops to children as well as programs to teach them digital skills; and Starlink, a for-profit enterprise that offers affordable access to high-speed Internet around the world thanks to its dedicated space satellites.

U.S. action is exemplified by the recently passed bipartisan Infrastructure Investment and Jobs Act, a multifaceted piece of legislation that includes $65 billion for programs that will work to bring high-speed Internet to the nation's rural areas.