You might think that after 50 years of teaching science classes at Sonoma Valley High School, Dean Knight might be a bit burned out and ready to retire.

Think again. He not only is still going strong, but also remains totally fascinated with teaching and life in general, and is eagerly seeking out new challenges.

“Dean has an incredible depth of knowledge and catalog of resources that he uses to support the department,” said Kelly O’Leary, chair of the SVHS science department. “But what I find really impressive is his willingness to learn and grow. One would think 50 years in teaching would make him closed off to new ideas, but he is quick to take on new challenges and try new things. I am so grateful to have worked with Dean and to have learned from him.”

Janet Hansen, the school’s librarian, praises Knight’s enthusiasm, saying he is always the first person to arrive at the school each day, often before 6 a.m.

“I think Dean’s work has been a big part of creating the environment we want to keep at SVHS: academic but exciting, based on curiosity, experimentation and a passion for learning,” she said.

And it doesn’t seem that he plans to retire any time soon.

“No plan,” he said. “I like everyone I work with … students, teachers, administrators and support staff. And I still find my topics interesting and challenging to teach.”

Knight received the District-Wide Technology Award this year for his use of new technologies during distance and hybrid learning. The award states that he was nominated by his peers “for your outstanding perseverance in continually adapting your program to utilize the latest necessary digital platforms. You inspire us all with your continued growth and commitment.”

The SVHS library is putting together a display dedicated to him that includes an article about “Sonoma’s Mad Scientist” in the Dragons’ Tale (the school newspaper) from the 1970s as well as items from school yearbooks and possibly some of Knight’s own artifacts. 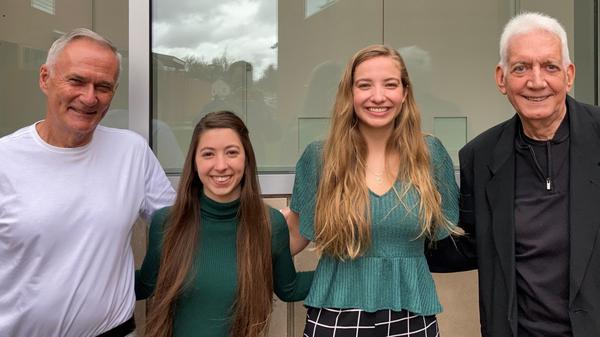 Knight, who teaches physics, AP physics and chemistry, said that navigating through changes is a never-ending process.

“Everything changes, so I am always deciding what I want to keep and what I want to go with,” he said. “Of course, the technology has changed a bit. I taught slide rule when I first came here. I remember changing our grading system from handwriting everything to using computers.

“When I first arrived, I took students to UC Berkeley to use the Lawrence Hall of Science’s computers to introduce them to this technology. Eight years later, we had our own computer lab set up in the science building.”

Forging a career as a science teacher

Knight’s interest in science was first sparked as a fourth-grade student in Castro Valley. He became intrigued with astronomy and even built an observatory for a homemade, 6-inch reflecting telescope on top of his father’s shop.

His interest in science grew, eventually leading to an undergraduate degree in physics in 1966 from a joint program offered by Pacific Lutheran University (PLU) in Tacoma, Washington, and Stanford University. Knight then received a three-year fellowship to attend UC Berkeley’s nuclear engineering department, but stayed for six years, receiving a master’s degree while also serving in teaching positions at Lawrence Hall of Science during the summers.

“During the school year, I also became a graduate teaching assistant for an interdisciplinary science course for undergraduates, which developed my interest in teaching younger college students,” he said.

After obtaining his teaching credential from Berkeley, Knight applied to Sonoma and one other school district.

“My first introduction to the area came when I was heading back from a beach party at UC’s Marine Biology Lab,” he said. “We headed to Little Switzerland in El Verano. I liked this community and that has not changed.”

During his remarkable career at SVHS, Knight has inspired thousands of teachers and students — including 1980 graduate Charles Marcus, professor at the prestigious Niels Bohr Institute at University of Copenhagen. He also has compiled a steady stream of teaching awards and notable accomplishments, such as collaborations with Russian physicists and NASA space shuttle projects.

For five years in the 1990s, Knight brought his students to Moscow, where they visited the Kurchatov Institute of Atomic Energy the first two years and participated in the Russian space program with People to People Youth Science Exchange the last three years.

He has helped to develop the ecology, electronics and astronomy clubs at SVHS. Knight also works with and gives tours of the radio telescope at Robert Ferguson Observatory in Sugarloaf Ridge State Park, has given presentations for prominent scientific organizations and has worked to develop connections with Ukraine through the Sister Cities International program.