BRAZIL are defending their Olympic football gold medal against Spain as the two strongest squads in the competition face off.

The Brazilians, captained by Dani Alves, needed penalties to get past a Mexico B team after a goalless draw and will hope to see a bit more from their strikeforce in the final.

THANKS FOR JOINING US

That's all from us this afternoon as Malcolm's extra time strike helped Brazil to the gold medal in the Men's football at Tokyo 2020.

Matheus Cunha had put the defending champions ahead at the break, before Spain responded in the second half through Mikel Oyarzabal.

The sides couldn't be separated after 90 minutes, but substitute Malcolm popped up to score the winner with just over ten minutes to go.

It's a third Olympic medal in three consecutive Olympic Games for Brazil, and two golds in a row.

Thanks very much for joining us for it.

It's been a pleasure.

An excellent record for a proud footballing nation.

That's the difference between victory and defeat.

For a full report from the Men's Football gold medal match at Tokyo 2020, click here.

That's what it means to Brazilian skipper Dani Alves.

The 38-year-old adds another medal to his haul of 43 trophies, and he is still the most decorated player in the history of football .

Brazil substitute Malcolm is the difference maker in Yokohama.

His extra time strike after a swift counter-attack from a Spain corner is the deciding goal and earns Brazil a third medal in three consecutive Olympic Games.

For Spain it was a third knockout game that went to extra time and the fatigue showed.

They just didn't have anything left in the tank after Malcolm's goal and looked like they had accepted defeat.

It's Brazil who win the gold medal and retain the Olympic title they won in Rio five years ago!

All of the players in yellow are on the ground, some in years.

The Spanish players have also collapsed to the ground, they can't have given anymore.

They have to settle for silver though, and it's Brazil who win gold!

121. Pedri tries a cross into the box that Santos doesn't know whether to claim or leave.

He ends up leaving it and the ball drifts out of play, ticking more seconds off the clock.

Pedri has his hands on his knees, he's on his last legs. 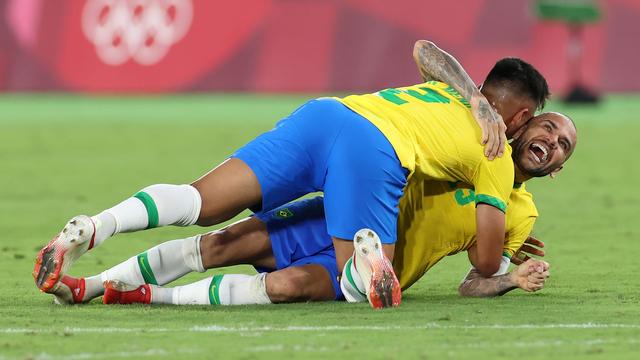 119. Gil cuts inside onto his left foot on the right wing and whips a cross towards the back post.

It's too close to the goalkeeper though and Santos gathers easily and falls to the ground.

117. Brazil are seeing out this game very professionally.

Diego Carlos heads a cross away from danger that is met by cheers from his Brazil teammates.

115. Pedri tries to slide a pass in towards Bryan Gil in the Brazil box, but Santos is off his line to collect the ball.

Spain are running out of time here.

Dani Olmo sends an effort goalwards that comes off a yellow shirt, but where has it hit him?

The Spanish players think it's off a Brazil hand, but the referee is having none of it.

Moncayola is on for Zubimendi for Spain.

And for Brazil Antony is replaced by Menino

111. Spain have less than ten minutes to force an equaliser here.

They've done in once this game already, but can they do it again?

As it stands they will have to settle for a silver medal.

107. Carlos Soler's corner is cleared away at the front post and Brazil break.

The ball is played from right to left and into the path of Malcolm who is in space on the left hand side.

He beats his man and lets fly with his left foot from a tight angle.

Unai Simon gets a foot to it but the ball loops up and hits the back of the net!

Is that the winner?

Dani Alves diverts a cross behind for a Spanish corner.

Nobody is rushing to take this, both sides are feeling the effects of 106 minutes of football.

Or is this one destined for a penalty shootout?

THE SECOND HALF OF EXTRA TIME IS UNDERWAY!

A change to report at the break in extra time.

Claudinho makes way for Brazil, with Reinier on to replace him.

THAT'S HALF TIME IN EXTRA TIME!

Rafa Mir is the man to replace him.

103. It's been all Brazil in the last five minutes.

Spain have looked shaky and they will be desperate for the half time whistle to blow.

There's 90 seconds left for them to hold out.