On the court, though, Moore has had to accept a role out of the spotlight. He has been effective enough to earn starts since his freshman season and might be the most versatile player on the team. However, sharing the floor with the likes of Jose Alvarado, Moses Wright, Michael Devoe and Jordan Usher, Moore’s job has been to be a part of the supporting cast.

“I’m the kind of player that just does whatever I need to do to get the win,” Moore told The Atlanta Journal-Constitution. “I’ve played pretty much every position. I really work on just playing hard.”

Moore, in the back half of his fourth and potentially final season with the Jackets, is playing at a time when the transfer portal has made it easy for players wanting a bigger role to look elsewhere. Role player might not be the path that he might have chosen, but he has made it his own.

“I’m willing to do anything to help my team win,” Moore said. “So if that’s the role that I needed to play, then that’s what I fit into.”

Going into the Jackets’ Saturday home game against Miami, Moore ranks fifth on the team among regular rotation players at 6.0 points per game in 25.1 minutes per game. He has started all 19 games, one of only two players to have done so (Usher is the other). He’s fourth among regulars in rebounds at 3.9 per game. His contributions go beyond that. He dives for loose balls, challenges shots and gives effort. Though his scoring contribution in the Jackets’ upset of Florida State was modest – nine points – Pastner called him and center Rodney Howard the MVPs of the win.

“That’s what makes him so valuable because he does the things that don’t always show up in the box score, and he’s helped us win games doing that,” Pastner said. 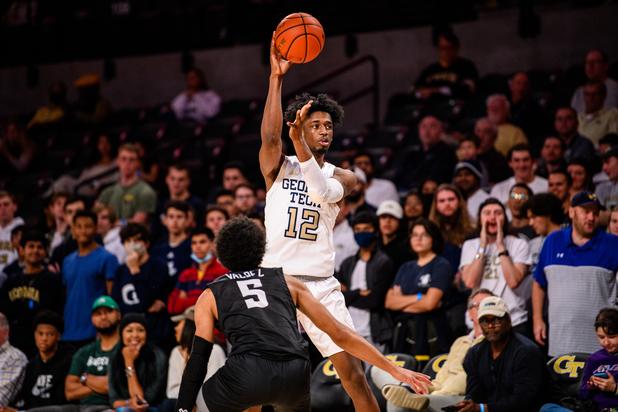 When Tech has gone with a small lineup, the 6-foot-7 Moore has played as the center and at the bottom of the 1-3-1 zone defense, wrestling in the post with players five inches taller than he is. At the same time, in Moore’s sophomore season, when Alvarado was out with an ankle injury, Pastner called on Moore to play point guard against Kentucky. Last year, when the Jackets played Pittsburgh at home, Moore was assigned to forward Justin Champagnie, who would go on to be named first-team All-ACC and now is with the Toronto Raptors.

In a Tech win, Moore held Champagnie to 13 points and six rebounds, below his season averages (18.0 and 11.1, respectively). It is perhaps not coincidence that the Jackets’ eight-game win streak, which culminated with the ACC championship, started when Pastner elevated Moore into the starting lineup for the game against Pitt.

“He’s a glue guy,” Pastner said. “He works his butt off. He gives incredible effort every time he steps on the floor. He epitomizes Georgia Tech.”

Moore’s defense-first, team-first approach are products of his upbringing. From the New York suburb of Elmont on Long Island, Moore learned toughness and aggressiveness on the city’s playgrounds and gyms.

As for his willingness to be a role player, that came from his parents, he said.

Moore has shown the ability to shoot, score and handle the ball. He sees himself more as a perimeter player. But with his ability to play bigger and the presence of players like Devoe and Usher, it has made sense to yield the scoring role.

Said his mother Gillian Stowe, “Khalid has a bigger-picture (perspective). He’s not about self. He’s definitely a team person. That’s how he’s been from the beginning.”

It has not been an easy transformation. Besides playing a position that’s probably not the best fit, there’s also no player who wouldn’t like a bigger role in the offense.

“Life sometimes is not always fair, so sometimes you have to take the good and the bad,” said Moore’s father, Otis Moore.

Moore, who is on track to graduate in May with a business degree, will have options for the future. He could use his extra COVID-19 year, either to stay or transfer, or turn professional. Going somewhere for his extra season where he could have a bigger role is certainly an option, and, after four seasons of selfless play, one that few could find fault with.

Even if he’s been in the shadows, his work hasn’t gone unnoticed. Miami coach Jim Larranaga, who recruited Moore out of Archbishop Molloy High in New York (also Larranaga’s alma mater), has observed Moore’s work and improvement.

“He’s kind of one of those players that’s a jack of all trades,” Larranaga said. “He can do a lot of different things well, he can play a lot of different positions, and I think that fits very well with Josh Pastner’s style of coaching.”