This article is an on-site version of our #techFT newsletter. Sign up here to get the complete newsletter sent straight to your inbox every weekday

So Apple ended up losing more than $6bn in revenues in its last quarter due to supply chain problems — an enormous number. Wait a minute though, it still pulled in $124bn in record revenues for the quarter, so those missed sales were really just a drop in the ocean.

Its shares are up more than 5 per cent today as the iPhone maker once again proved its ability to ride out any storm. Net profits jumped 20 per cent to $34.6bn, well above forecasts of $31.1bn.

Finance chief Luca Maestri told the Financial Times that supply chain concerns were easing, adding: “We expect to set a March quarter revenue record and we expect to grow revenue solidly on a year-over-year basis.”

The December quarter saw iPhone account for 58 per cent of total revenues at $71.6bn. It was the top seller among smartphones in China, where revenues climbed 21 per cent to $25.8bn. Lex says Apple should spend more on finding iPhone’s successor, the $6bn for research and development in the past quarter was far lower than the sum spent on share buybacks.

Revenues from services jumped 24 per cent to $19.5bn. This included its cut from App Store purchases, which came under fire again on Thursday.

The US Department of Justice, Microsoft and 35 state attorneys were among those calling for a reversal of a court ruling last year that found fees on purchases do not violate competition law. The filings submitted in a California court also included 38 professors of business, law and economics, who wrote: “The magnitude of Apple’s profit margin and its imperviousness to competition are compelling evidence that Apple is exercising monopoly power.”

The Internet of (Five) Things

1. Claure leaves SoftBank after bust-upMarcelo Claure, one of SoftBank’s highest-paid executives who led a turnround at WeWork, has left the Japanese tech conglomerate after a falling out with founder Masayoshi Son. Lex says a dispute over an eye-watering pay rise of more than 60-fold might be understandable, but shareholders should worry that this is a sign of an emerging leadership crisis. Read our in-depth analysis of the split. 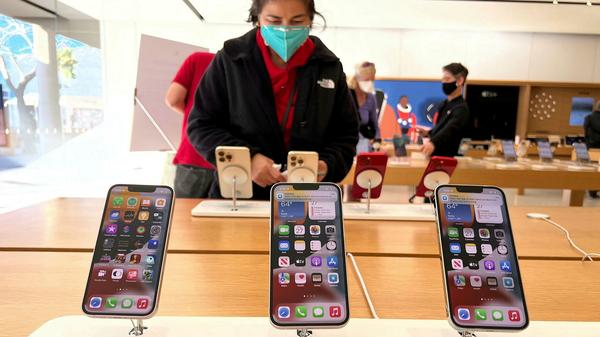 2. Coinbase promises more crypto transparencyCryptocurrency exchange Coinbase has promised it will be “even more transparent” about the holdings of its investment arm after FT analysis highlighted potential conflict of interest concerns. Coinbase has listed at least 20 cryptocurrencies for trading while holding an investment in a related project.

#techFT brings you news, comment and analysis on the big companies, technologies and issues shaping this fastest moving of sectors from specialists based around the world. Click here to get #techFT in your inbox.

3. Lynch loses Autonomy fraud caseMike Lynch, the billionaire founder of software maker Autonomy, has lost a fraud case brought by Hewlett Packard Enterprise. Lynch had been sued in London’s High Court for allegedly manipulating accounts, causing HPE to pay an extra $5bn when it acquired Autonomy in 2011. The judge said damages would be “considerably less” than HPE had claimed.

5. Genesis allows NFTs to be collateral for loansThe digital asset trading group Genesis has started accepting non-fungible tokens as collateral for loans and derivatives deals, in a sign that digital art has found its way into the booming market for complex crypto financial products. House & Home has been looking at how NFTs can secure you a home in the metaverse.

Peloton may be having its problems, but those making on-the-road e-bikes to improve your fitness are riding high in the saddle. Belgium’s Cowboy has just announced an $80m Series C funding round that it says will enable it to “accelerate product innovation by bringing core technologies in-house . . . and continue to build a community around fitness through its increasing app usage”. Its Dutch rival VanMoof announced a $128m funding round back in September and this week reported reservations for its forthcoming VanMoof V high-speed e-bike had hit 10,000, just three months after it was unveiled.

I have tried out its current generation X3 (£2,000), which has 24-inch wheels compared with the 28-inch ones on its other S3 version. Like many e-bikes, it’s not lightweight at 46lbs. Its weighed down by a battery, which unlike on Cowboy’s bikes, is not removable, so means the bike itself has to be near a power outlet to recharge.

My first major trip began unpromisingly with a puncture, but once back on the road I was impressed with the way it helped me move through the gears with its four power levels and automatic shifting. The best feature is the turbo-boost button on the handlebar. One press and I was streaking away from traffic lights and soaring up difficult slopes.

There was no range anxiety either. I managed a 60-mile ride with plenty of juice left and it can be charged to 50 per cent in 80 minutes. There is even a removable PowerBank accessory that can give you up to 65 miles extra range. The X3 has antitheft features such as an easy way to lock the rear wheel and GPS tracking and all features can be controlled using the companion app. What’s missing is an integrated smartphone mount to aid with viewing the app, but you could add one yourself or wait for the V, which will include one. Until that arrives towards the end of this year, the X3 is up there with the best e-bikes I’ve tested. You can read a How to Spend It round-up of the latest models here.

Recommended newsletters for you

#techAsia — Your guide to the billions being made and lost in the world of Asia Tech. Sign up here

#fintechFT — The latest on the most pressing issues in the tech sector. Sign up here