FRANKLIN, Va. — The trial continues for the man accused of killing his 18-year-stepdaughter in 2015.

AJ Hadsell disappeared from her Norfolk home and investigators found her body weeks later in Southampton County. Her stepfather, Wesley Hadsell, is on trial for her murder.

The first person to take that stand on Friday was Jennifer Wright, who is AJ’s mom. Wright said she and Wesley Hadsell met in 2010 and ended up getting married a month after they met. They have one child together, who is now 10 years old.

Wright said in 2015, she kicked Hadsell out of the house because she found out he started using drugs. Hadsell decided to stay at a hotel close to their home. Wright said she even tried holding an intervention with Hadsell, his mother, and his nephew.

Wright said she picked AJ up from college at Longwood University the weekend on March 2, 2015. AJ was a freshman, double majoring in information technology and computer programming. She also played club softball and field hockey.

Wright said on the day AJ disappeared, Hadsell called her at work to drop his personal truck off and pick up his work truck. She said she told him to leave the keys in the mailbox, just in case AJ needed to go somewhere.

When Wright arrived home, she testified that AJ was gone, however, her wallet and coat were still in the home. The family also noticed some clothes of AJ’s were missing and a note was left on the kitchen table. 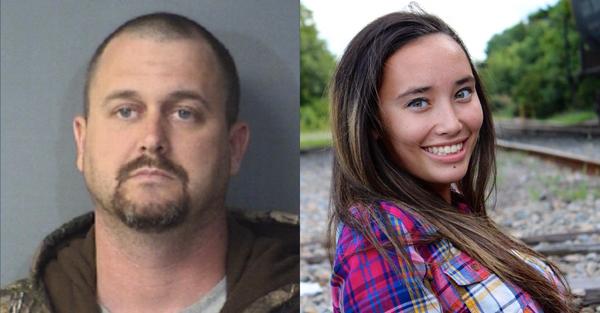 The note read, “With everything going on, it’s a lot to deal with.” Wright said she questioned the note because it didn’t make sense to her or her other daughters.

The prosecution showed pictures of AJ. Her mom said AJ was always happy and never used drugs or had any other issues. She also testified that AJ didn’t have bruises or black eyes the last time she saw her daughter.

Wright said during the search for AJ, Hadsell often received “tips” and would go investigate them. She said every time she found something out, she would let an investigator know what they found. Wright said Hadsell tried to blame a man named Corey for AJ’s disappearance, who was AJ’s ex-boyfriend.

During cross-examination, Hadsell’s attorney told Wright he was sorry for her loss. Wright told the attorney that she still has all of AJ’s things and after AJ’s disappearance, she drove to Longwood to pick up the rest of her belongings.

Wright did mention that AJ no longer got along with Wright’s ex-husband Zach, but didn’t know the reason why. Wright said Hadsell adopted AJ because AJ was getting her permit and she never used her biological dad’s last name.

Wright said Hadsell and AJ were close and confirmed that she doesn’t believe he ever raped, touched, or made inappropriate comments toward her. She said she did feel uncomfortable when she found out Hadsell was doing drugs.

One interesting thing Wright said, is she found out Hadsell attempted to rent a pickup truck and was going to use someone else’s name to rent it. She said he already had a pickup truck at the time.

Wright’s ex-husband Zach testified that he was married to Wright for seven years. AJ was only about a year and a half old when they met, and Zach said he treated AJ like his own child. He taught her how to ride a bike and play sports.

When AJ disappeared, Zach made posters and even offered a reward to find her.He worked as a maintenance technician for a credit union and drove a blue Dodge Caravan. He told jurors he never transported a body in that van.

When police questioned Zach, he gave them permission to do and search anything. He even provided his DNA to police.

He said he and Hadsell started a business for about six months doing handy work. After not moving forward with the business, Zach said they were not friendly with each other.

When Hadsell was arrested, Zach did talk to him and said he kept switching up his story.

The last person to testify was Norfolk Police Officer, Matthew Burnham. He was a forensic investigator in AJ’s disappearance. He was in charge of searching Wesley Hadsell’s hotel room and work van.In the room, he found heroin, duct tape, and ammunition.

In Hadsell’s work van, Burnham said he found a hair scrunchie and a picture of AJ.

Late in the day Friday, the judge excused a juror. The woman told both attorneys her job is not paying her while she does her civic duty. She said she can’t focus on the trial because she worries about paying bills.

There are now 12 jurors and one alternate.

This trial is expected to take two more weeks.