“It seems that I have always been ahead of my time,” Serbian-American engineer and physicist Nikola Tesla once mused. While the eccentric inventor pioneered advances in radio, television, motors, robotics and electricity—including the alternating-current technology that’s widely used today—he also proposed some more outlandish ideas.

In 1893, Tesla patented a steam-powered mechanical oscillator that would vibrate up and down at high speeds to generate electricity. Years after patenting his invention he told reporters that one day while attempting to tune his mechanical oscillator to the vibration of the building housing his New York City laboratory, he caused the ground to shake. During the test, Tesla continuously turned up the power and heard cracking sounds. “Suddenly,” he recalled, “all the heavy machinery in the place was flying around. I grabbed a hammer and broke the machine. The building would have been down about our ears in another few minutes.” Police and ambulances arrived on the scene to attend to the commotion, but Tesla told his assistants to remain quiet and tell the police that it must have been an earthquake. 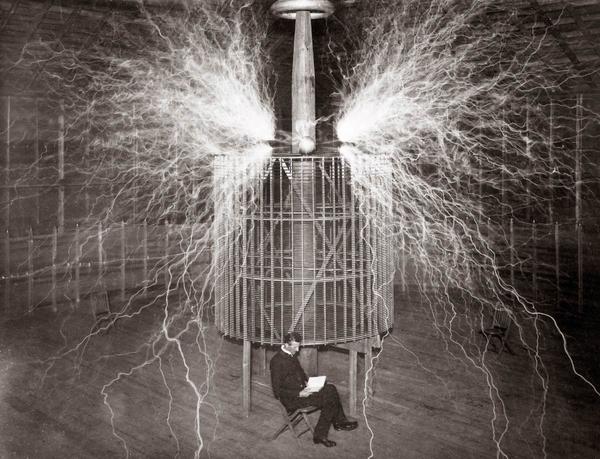 Tesla believed it could be possible to photograph thoughts. The inspiration came while he was doing experiments in 1893, Tesla told a newspaper reporter decades later: “I became convinced that a definite image formed in thought must, by reflex action, produce a corresponding image on the retina, which might possibly be read by suitable apparatus.” The inventor conceived of reflecting an image on an artificial retina, taking a photograph and projecting the image on a screen. “If this can be done successfully, then the objects imagined by a person would be clearly reflected on the screen as they are formed,” he said, “and in this way every thought of the individual could be read. Our minds would then, indeed, be like open books.”

In 1901, Tesla secured $150,000 from financier J.P. Morgan to build a 185-foot-tall, mushroom-shaped tower on the north shore of Long Island capable of transmitting messages, telephony and images to ships at sea and across the Atlantic Ocean by using the Earth to conduct signals. As work began on the structure, called Wardenclyffe Tower, Tesla wanted to adapt it to allow for wireless power delivery, believing from his experiments on radio and microwaves that he could light up New York City by transmitting millions of volts of electricity through the air. Morgan, however, refused to give Tesla any additional funding for his grandiose scheme. (Some speculate that Morgan cut off funds once he realized that Tesla’s plan would have crippled his other energy-sector holdings.) Tesla abandoned the project in 1906 before it could ever become operational, and Wardenclyffe Tower was dismantled in 1917.

The engineer and physicist believed the power of science could be harnessed to prevent war. In 1907 the New York World reported on another of Tesla’s military innovations in which wireless telegraphy would trigger the detonations of high explosives at sea to generate tidal waves so vast that they would capsize entire enemy fleets. The newspaper reported that the artificial tidal wave would “make navies as useless as the paper boats that babies float in bathtubs” and, foreshadowing later claims about the development of nuclear weapons, “by its horrors hasten the day of universal peace.”

From the time Tesla was a boy, he had been fascinated with the idea of flight. Combining his knowledge of electrical and mechanical engineering, he began to think more about aviation after the failure of Wardenclyffe. In an article in the July 1919 issue of Reconstruction magazine, Tesla discussed his work on developing a supersonic aircraft that would travel eight miles above the surface of the Earth and generate speeds allowing passengers to travel between New York City and London in three hours. Tesla’s concept called for the aircraft to be powered by electricity transmitted wirelessly from power plants on the ground, eliminating the need for aircrafts to carry fuel. “The power supply is virtually unlimited, as any number of power plants can be operated together, supplying energy to airships just as trains running on tracks are now supplied with electrical energy through rails or wires,” Tesla said in the article.

Tesla’s creative mind continued to spark new visions even late in his life. On his 78th birthday, he told The New York Times that he had come up with this most important invention, one that would “cause armies of millions to drop dead in their tracks.” The invention? A military weapon that would accelerate mercury particles at 48 times the speed of sound inside a vacuum chamber and shoot a high-velocity beam “through the free air, of such tremendous energy that [it] will bring down a fleet of 10,000 enemy airplanes at a distance of 250 miles.” Although the press dubbed it a “death beam,” Tesla believed it a “peace beam” that would foil attacks by airplanes and invading armies and save lives by acting “like an invisible Chinese wall, only a million times more impenetrable.” Tesla offered his particle-beam weapon to numerous governments, including the United States, but the only country to show interest was the Soviet Union, which conducted a partial test in 1939.