By JAKE SHERMAN and ANNA PALMER

BREAKING OVERNIGHT … AP: “Judge says 2020 census must continue for another month,” by Mike Schneider in Orlando, Fla.: “A federal judge has stopped the 2020 census from finishing at the end of September and ordered the once-a-decade head count of every U.S. resident to continue for another month through the end of October, saying a shortened schedule likely would produce inaccurate results.

“U.S. District Judge Lucy Koh in California made her ruling late Thursday, two days after hearing arguments from attorneys for the Census Bureau, and attorneys for civil rights groups and local governments that had sued the Census Bureau in an effort to halt the 2020 census from stopping at the end of the month. Attorneys for the civil rights groups and local governments said the shortened schedule would undercount residents in minority and hard-to-count communities.”

ALL OF A SUDDEN, IT APPEARS AS IF COVID relief has exploded back onto the scene. Please allow us to translate, before you get too worked up. This may or may not be a real thing. We trend toward the latter -- it’s not a real thing -- but read on …

-- OUR COLLEAGUES HEATHER CAYGLE, SARAH FERRIS and JOHN BRESNAHAN scooped that Speaker NANCY PELOSI had her leadership team in her office early Thursday afternoon, and they discussed passing a $2.4 TRILLION stimulus bill sometime next week -- after Wednesday.

-- IF THAT BILL MAKES IT TO THE FLOOR, Covid relief is most likely dead for the time being -- it will just be a messaging bill to help Democrats out.

-- IF PELOSI DOESN’T PUT IT ON THE FLOOR, it probably means that she thinks she could get a deal, and vote on that instead.

-- AGAIN, REPEATING HERE FOR YOU: Republicans say their upper limit is at $1.3 trillion to $1.5 trillion. DEMOCRATS are at $2.4 trillion. We laid out the contours of a possible bill a week ago -- but there have been no talks. And the two sides have not moved one inch. Sources told us last night that Treasury Secretary STEVEN MNUCHIN and PELOSI had not spoken Thursday.

-- WE’RE NOT ENTIRELY SURE why putting a bill on the floor at the same price tag as the offer last week would move anyone to the table.

-- PRESIDENT DONALD TRUMP’S instinct is to spend money -- Republicans know it, and Democrats know it. If it were up to MNUCHIN, Dems and Rs believe there would be a deal. But MARK MEADOWS is around for a reason -- the chief of staff represents the angst of Senate Republicans and House Republicans, who don’t want to spend this money right now.

-- THE DEM CALCULUS IS TOUGH: House Dem leadership wants to help moderates by giving them a vote, but the left -- and unions -- don’t want her to go too far to appease them. And, of course, Senate Minority Leader CHUCK SCHUMER and Senate Dems are battling for control of the Senate, and that affects how much they are willing to bend.

IS EITHER SIDE GOING TO CAVE? If your answer is probably no one, then you are in line with the thinking of most smart people in the Capitol.

“‘Nobody’s seen this before, these cards are incredible,’ Trump said Thursday during a speech on health care. ‘The cards will be mailed out in coming weeks, I will always take care of our wonderful senior citizens. Joe Biden won’t be doing this.’

“Sending coupons to that many Medicare beneficiaries would cost at least $6.6 billion. Two senior White House staff said the money can be used as part of a Medicare program, called the 402 demonstration, that tests innovations that could save money or improve the quality of care in Medicare.”

-- STAT: “That regulation has also not yet been implemented — meaning the Trump administration is effectively pledging to spend $6.6 billion in savings that do not currently exist.”

DRIVING TODAY: RBG will lie in state in the Capitol. The BIDENS and Sen. KAMALA HARRIS (D-Calif.) will come to pay their respects. 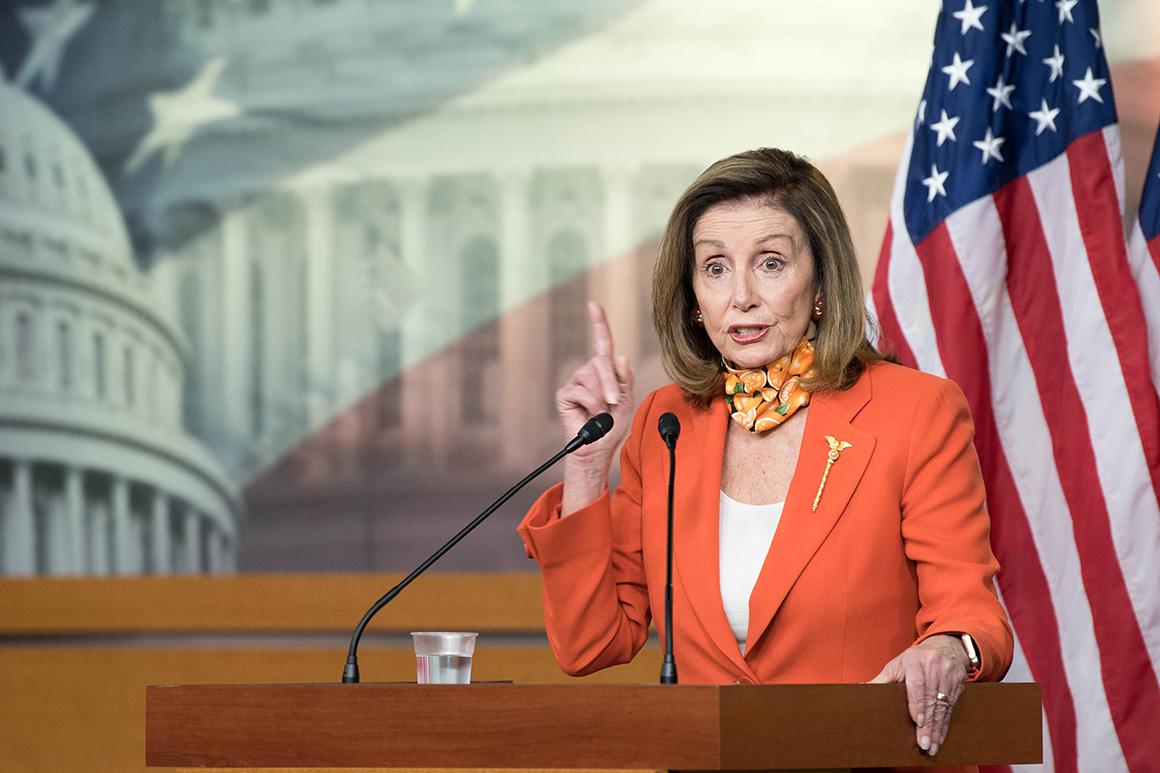 -- WAPO’S SEUNG MIN KIM: “White House starts outreach to key senators on Supreme Court pick”: “The White House has started its outreach to key senators who will play influential roles in the confirmation fight for President Trump’s yet-to-be-named nominee to the Supreme Court, a sign that the administration is preparing to move rapidly once the president reveals his pick Saturday afternoon.

“White House officials have asked several members, both Democratic and Republican, of the Senate Judiciary Committee if they would like to meet personally with the nominee starting next week, according to two officials directly familiar with the invitations.

“The administration has not disclosed the identity of the nominee in its outreach to senators, but Trump’s choice is widely believed to be Judge Amy Coney Barrett of the U.S. Court of Appeals for the 7th Circuit.

“The courtesy one-on-one meetings between a Supreme Court nominee and senators are a traditional fixture of the confirmation process. Depending on the senator, the visits range from quick photo ops to lengthy, in-depth discussions about a nominee’s judicial philosophy.”

“The change in tone reflects the tightrope Trump is currently walking on abortion with conservatives -- and especially religious conservatives -- ahead of the November election. Trump needs to both nod to concerns of powerful religious groups that have spent years trying to overturn Roe, the 1973 Supreme Court decision that cemented legal abortion, while not turning off the sizable faction of more moderate religious voters and Republicans who support legal abortion.”

KNOWING BARBARA LAGOA -- “How Barbara Lagoa’s fight for Elian Gonzalez shaped her legal career,” by Gary Fineout in Tallahassee: “While she was not in the spotlight like some of the other attorneys who worked on the case, Lagoa spent time with Gonzalez family members and played a key role in sharpening the legal attack on President Bill Clinton’s administration, which wanted to send the young boy back to Cuba. …

“Lawyers who worked with Lagoa passionately recall how the case left Lagoa and others ‘heartbroken’ and outraged after the seizure of Gonzalez. … Attorneys and acquaintances who know Lagoa said the case shaped her judicial philosophy, which calls for adhering to the ‘black letter’ of the law, as Lagoa herself said during numerous judicial interviews.”

OBAMA and HARRIS are raising money together next week, per Bloomberg’s TYLER PAGER and JEN EPSTEIN.

DAVID SIDERS and HOLLY OTTERBEIN: “‘Everyone sees the train wreck coming’: Trump reveals his November end game: “After more than four years of non-stop voter fraud claims, insinuations that he might not accept the presidential election results and at least one float about delaying the November election, it’s no secret. Trump’s refusal to commit to a peaceful transition of power this week -- and his choice not to walk back his remarks Thursday in the face of widespread unease -- merely broadcast his strategic intent in terms both parties can understand.

“As a result, Republicans can no longer truthfully deny that Trump may be unwilling to leave office in the event he is defeated. And Democrats must now confront the possibility they may not have the power to stop him.”

BOSTON GLOBE’S VICKY MCGRANE in Portsmouth, N.H.: “Trump campaign says it built a turnout machine in N.H. for November. Democrats are skeptical”: “Four years after Trump’s chaotic 2016 campaign lost New Hampshire by fewer than 3,000 votes, the president’s political strategists appear to see an opportunity here. Backed by a $350 million national data operation, they contend they’ve deployed a much more sophisticated ground game that will give them the boost they need to win the state and its four electoral votes.

“The campaign has showered the state with attention in recent weeks, from President Trump’s Aug. 28 rally in Londonderry, to Eric Trump’s rally-the-troops visit to Portsmouth on Sept. 17 -- which coincided with a surprise trip by Melania Trump for an event at Concord Hospital -- and a campaign stop in Gilford on Tuesday by Vice President Mike Pence.”

TRUMP’S FRIDAY: THE PRESIDENT is in Miami. He will have an 11 a.m. Latinos for Trump roundtable, and then will fly from Miami to Atlanta at 12:25 p.m. At 2:40 p.m., he will speak about “Black Economic Empowerment: The Platinum Plan” at the Cobb Galleria Centre. At 4:05 p.m., he’ll leave Atlanta for D.C., and will head to the Trump Hotel for a roundtable with supporters, before heading back for Andrews at 7:55 p.m. for Newport News, Va., for a 9 p.m. rally. He’s expected back at the White House at 11:30 p.m.

“The explosive audit released Tuesday found that dozens of students were admitted to the most selective UC campuses over more qualified applicants because of exaggerated athletic abilities, connections and wealth.

“The audit did not name the individuals involved, instead using generic terms like ‘coach’ and ‘donor.’ The auditor’s office said the lack of identification was meant to protect student privacy. But in response to a specific question from the Bay Area News Group about the identity of the regent, spokeswoman Margarita Fernandez said the report refers to Richard Blum.

“In a phone interview Thursday, Blum was unapologetic, saying he did not recall the specific incident mentioned in the audit but that he has written letters on behalf of students to chancellors at various UC campuses for years.

“‘This is the first time I’ve heard that maybe I did something that wasn’t right,’ Blum said. ‘I think it’s a bunch of nonsense.’”

TRANSITION WATCH … NANCY COOK: “As the president rails against mail-in ballots and ‘Sleepy Joe Biden,’ assistant to the president Chris Liddell has spent weeks mapping out a possible handover of power to Democrat Joe Biden.” POLITICO

“Each of the nation’s five wealthiest and most powerful college football conferences are now back in action, as the president continues to seize on the issue of restarting fall sports as a campaign attack against Democratic presidential nominee Joe Biden.” POLITICO

VALLEY TALK -- “Inside Facebook’s year of reckoning on political ads,” by Nancy Scola: “As public complaints mounted that Facebook was refusing to police dangerously deceptive U.S. political ads, the company stuck for nearly a year to a hard line CEO Mark Zuckerberg had drawn: ‘I don’t think it’s right for a private company to censor politicians or the news in a democracy.’ …

“Those involved in the discussions over political ads say Facebook officials spent nearly a year wavering between its founder’s declarations on free expression and a desire to avoid becoming a presidential-election villain yet again. … Inside Facebook, the mood is still rattled as executives stare in the face of the chaos injected into the race by both Covid-19 and President Donald Trump’s high-pitched claims of election fraud. ‘“Holy s---,” is what we’re thinking most of the time, like everybody,’ one Facebook executive said of the current feeling about the U.S. election inside Facebook.” POLITICO

THE SUNLIGHT FOUNDATION announced that it is shutting down operations. Statement from board chair Michael Klein

FIRST IN PLAYBOOK -- Merry Lin is joining the Asia Group as a principal. She most recently was a senior adviser on the National Economic Council, and has also worked at the NSC, Treasury and CIA across multiple administrations.

WELCOME TO THE WORLD -- Michael Irwin, senior director of technology operations and cybersecurity at POLITICO, and Michael Zurat, solutions architect at GDIT, on Wednesday welcomed Matthew James Irwin, who came in at 6 lbs, 14 oz and joins big brother William. Pic

BIRTHDAY OF THE DAY: Jack Howard, SVP of congressional and public affairs for the Chamber of Commerce. A fun fact about him: “I was a successful ‘Phone A Friend’ on ‘Who Wants to Be a Millionaire’ back when 40 million people were watching.” Playbook Q&A