The NIST FRVT reports are extensive and test many aspects of how face recognition algorithms perform in challenging use cases. In its primary 1:N Identification benchmark, NIST evaluates face recognition accuracy in a Visa / Border test, with high-quality enrollment images compared against a large dataset of images taken of people in challenging travel environments often characterized by varying pose angles, low spatial resolution and low contrast. This reflects a common identification scenario in a secure environment, such as an airport.

Since its first submission to NIST FRVT 1:N in 2018, Paravision has shown rapid and continuous improvements in accuracy. Over the last three years, Paravision’s error rates have decreased by more than 95%, including a 70% reduction in just the last year.

“Accurate face recognition is vital for security, efficiency and enhanced user experiences across so many industries and applications,” said Charlie Rice, CTO of Paravision. “It comes down to trust — trust that the technology works for everyone, is consistent, reliable and accurate. That’s why the NIST FRVT reports are so important. They are the independent gold standard when it comes to transparency in performance.” 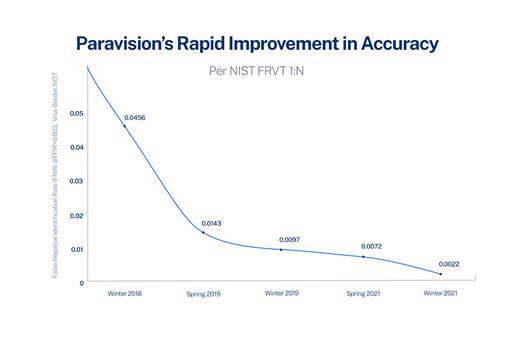 “Paravision is now independently recognized as the most accurate face recognition platform in the world and the only U.S. company in the top 10. Given the scale of legacy providers and the massive funding and resources going specifically to Chinese AI firms, the ranking is a huge testament to our approach,” said Doug Aley, CEO of Paravision. “It’s an inflection point for our industry — trusted, ethical and accurate face recognition from a truly partner-focused company.”

Paravision’s 5th generation face recognition technology is planned for official release in Spring 2022. As well as the dramatic improvements in speed and accuracy, the new product set will include enhanced support for mobile devices, Edge AI and other toolkits to accelerate the deployment of face recognition in a range of applications.

Paravision has developed deep expertise in face recognition specifically, and strives to consistently raise the bar for face recognition technology in accuracy, security, inclusion, and convenience. Paravision has consistently ranked among the top global performers in NIST's gold standard Face Recognition Vendor Tests, including 1:1 Verification, 1:N Identification, Face Mask Effects and Paperless Travel and matches these benchmarks with breakthrough performance in a wide variety of identity-centric applications around the world.

Photos accompanying this announcement are available at: