On April 7, 2022, Beowulf Cluster Computing was inducted into the Space Technology Hall of Fame during the 37th annual Space Symposium hosted by Space Foundation in Colorado Springs, Colorado. The stated purpose of the hall of fame is to “recognize the life-changing technologies emerging from global space programs; honor the scientists, engineers, and innovators responsible; and communicate to the public the importance of these technologies as a return on investment in space exploration.”

Mike Little, a long-time NASA computer systems expert who worked at NASA headquarters (HQ) in the 1990s, managing a different part of the agency's supercomputing program in Code R (the former Research and Engineering Directorate), recalled that he had known about Fischer and Sterling’s work and attended the HPCC program reviews at NASA HQ. Little recalled, “I was acutely aware of and excited about what they were doing on the ESS Project.”

Noting the life-changing impact of the ESS Project, Little observed, “The Beowulf computer cluster was a breakthrough at NASA that enabled many other innovations, including accurate, data-driven numerical weather forecasting and the evolution of aircraft design without the use of wind tunnels. Virtually every other area of science, math, and biology continue to be direct beneficiaries of this groundbreaking work.”

However, what was the original impetus for NASA to develop faster computers in the first place? What were the technical and societal environments that spurred these innovations? According to Jim Fischer, that’s a story that goes all the way back to the Space Race in the mid 1950s, when the United States and the former Soviet Union were competing for dominance in missile technology and spaceflight capability during the historic Cold War. 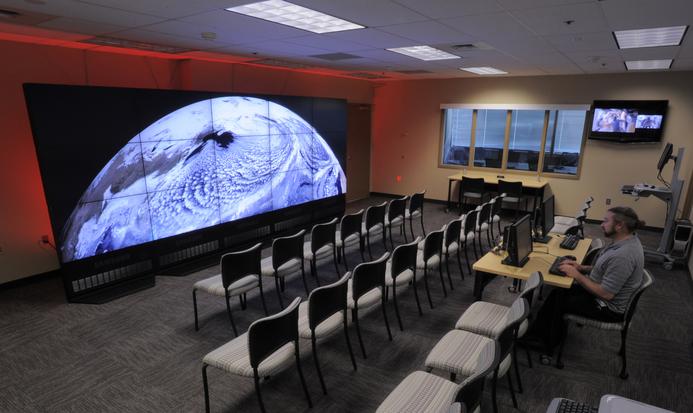 In 1955, the Eisenhower administration had publicly announced the intent to launch an American scientific satellite into orbit during the International Geophysical Year (IGY), which spanned July 1957-December 1958. This collaborative, global scientific research effort was designed to study several Earth science phenomena, collect data, and share research results among the dozens of participating nations. Several World Data Centers were also established to store shared IGY data. Notable results from the IGY explorations include the confirmation of plate tectonic theory, polar exploration, the discovery of the Van Allen radiation belts in Earth’s magnetosphere, and the development of scientific satellites.

After the Soviet Union successfully launched the first Sputnik satellite in October of 1957, achieving that spaceflight milestone before the United States could, the so-called “Sputnik crisis” began, with the shocking perception that the U.S. lagged behind the Soviet Union in technology and science education. In response, the U.S. government doubled its efforts in advancing spaceflight.

The U.S. Congress quickly passed the National Aeronautics and Space Act of 1958, and two new government agencies were born out of the Sputnik crisis: the civilian-oriented National Aeronautics and Space Administration (NASA) and the military-oriented Defense Advanced Research Projects Agency (DARPA). NASA became the successor to its predecessor, the former National Advisory Committee for Aeronautics (NACA), a civilian group founded in 1915 to catch up with then-superior European aviation technology during World War One. The NACA committee of presidential appointees, which included pioneering aviator Orville Wright, established the Langley Research Center (LaRC) in Hampton, Virginia in 1920 and began building a series of wind tunnels to test new aircraft, a classic example of the commercial and public benefits of NASA-derived technologies.

In May 1959, NASA established its first space flight facility in Greenbelt, Maryland, the Goddard Space Flight Center. The United States Naval Research Laboratory had developed Project Vanguard with a goal to launch a scientific satellite during the IGY using a 3-stage Vanguard rocket and track the spacecraft. After the Sputnik launch, NRL staff from Project Vanguard were transferred from the Washington, D.C. laboratory to NASA Goddard. The Vanguard Project was then managed by NASA, and the satellite staff became the first occupants of the new NASA facility.

Three of the eleven Vanguard satellite launches were successful, including the final satellite launched in September 1959, Vanguard III. Onboard were four distinct experiments, measuring Earth’s magnetic field; the X-ray emissions from the Sun; upper atmospheric densities; and the impact of micrometeorites on the outer shell of the small, (50.8 cm diameter) spacecraft. The Vanguard III satellite is still in Earth orbit after 62 years and may continue to orbit for another 200 years.

Early computer research at NASA Goddard was a response to the mid-20th Century Space Race. Former NRL Project Vanguard manager Jack Townsend became the Assistant Director for Space Science and Satellite Applications at NASA Goddard, and David Schaefer, a physicist who was part of the original NRL team that worked on the Vanguard satellites’ telemetry system, moved from NRL to NASA at the same time.

Schaefer was an expert in magnetic amplifiers. At NRL, he developed the radio telemetry for the Project Vanguard satellites, enabling the transmission of the count of micrometeorite strikes in real time back to receivers on Earth. At NASA Goddard, Schaefer took on the role of developing computing for space.

With each new satellite that was developed at NASA Goddard, more onboard computing was incrementally added, with Schaefer flying the first transistor and the first integrated circuit in space. Fischer recalled, “the addition of onboard computing became something that the scientists appreciated, because if they had some kind of intelligence on board, they could get more science data back by working with the computing people.” Over time, Schaefer's attention expanded to also improving the ability of ground-based computers of those days to capture the scientific data being transmitted by each new satellite.

The early data rate was one bit per second, but when the data rate increased in the 1970s, data started piling up at NASA Goddard in huge rooms full of round storage tapes that had to be indexed, mounted, and requested to access. The whole process was inefficient, time-consuming, and expensive. In the 1970s, NASA managers anticipated the need for greatly increased downlink speeds for the new, Earth-observing Landsat satellites. Since the Landsat satellites produce a complete image of Earth’s land surface in a little over two weeks, the amount of data increase demanded more efficient data transfer as well as faster, more powerful computing capabilities. NASA needed to come up with a new way to conduct more onboard data processing or somehow reduce the volume of the satellite-collected data.

With those needs in mind, and with a funding stream to address the Landsat Mission’s requirements, Dave Schaefer led his team to develop a massively parallel processor (MPP), the first of its kind. He hired Jim Fischer in 1974 to work on ideas for implementing MPP. In 1978, George Rumney, now at the NASA Center for Climate Simulation (NCCS), came aboard to work on the MPP’s software. When Schaefer retired in 1981, Fischer became the team lead. Massively parallel computing caught on with the NASA science community and was commercialized by companies such as Digital Equipment Corporation and MasPar Computer Corporation. Goddard’s successful use of the MasPar computer positioned the team to have the lead role in the HPCC program’s ESS Project starting in 1992.

One of the technical goals of ESS was to develop a massively parallel workstation for use by Goddard scientists. With that goal in mind, Sterling came up with the idea to combine the newly-available, open-source Linux operating system with leading edge personal computers and Ethernet cables for networking, integrating these technologies into computer clusters termed Beowulf. Sterling brought Don Becker aboard to help with the project, because Becker was a Linux guru who had developed useful Ethernet drivers and could integrate the Beowulf prototype. ESS lead for systems software, John Dorband, embraced this new idea, and he began to find applications for it among ESS’s network of scientific researchers.

NASA computer systems engineer Mike Little, who, like Fischer and Schaefer, has been involved in high-end computing for several decades, remarked on the impact of the first Beowulf computer cluster and the importance of these technologies as a return on investment in space exploration, “In the early 1990s, as NASA grew more and more dependent on supercomputing to create physics-based models, resolution became increasingly important.” In order to run these models, bigger vector supercomputers were needed, but their high cost limited what the agency could afford. The Beowulf approach offered comparable performance, but it was ten times less expensive.

The Beowulf computer cluster, invented by the ESS Project team at NASA Goddard, is the foundation of today’s high-end computing systems. The original Beowulf was a new model for enabling the efficient storage and retrieval of massive datasets and scalable parallel computing and set a new standard at NASA for experimentally integrating new technologies to accelerate computational research and adapt to the ever-changing scale of scientific datasets. With relatively little project funding and a lot of ingenuity, passion, and creativity, the NASA Goddard team’s award-winning project, now inducted into the Space Technology Hall of Fame, accelerated the global move away from expensive, proprietary supercomputer systems and toward the adoption of PC clusters and open-source software by the scientific community.

Beyond the impact to scientific research, the benefits of this revolution in cluster computing at NASA Goddard has a direct, daily impact on the lives of Earth and its inhabitants, as high-end computing continues to experiment, evolve, and enable accurate, complex, detailed Earth system models used to understand and predict important phenomena such as Arctic amplification, storm systems, ozone climatology, solar eruptions, and climate science.